After the unprecedented election on June 7, 2015, in which the ruling Justice and Development Party (AKP) lost its parliamentary majority after 13 years, Turkey’s post-election process is poised to look very different. With no party holding a 276-seat majority out of the total 550, forming a coalition government is the crucial next step. This process, however, has been sluggish under President Recep Tayyip Erdo?an’s leadership.

It seems that Erdo?an, whose hopes of creating a stronger presidential system were dashed as a result of AKP’s disappointing poll results, is simply biding time despite his duty to move the negotiation process forward.

Without a single party majority, Turkish law dictates that the task of forming a coalition government must be given to a party chair in good standing with the president. After the coalition chair is selected, they have 45 days to form a government, otherwise, the president calls for early elections and appoints a prime minister within five days. The president must then form an interim government with representatives from all four parties according to their number of votes.

In the past, Turkey’s presidents have assigned leaders to begin negotiations as soon as a week after the election and before parliament convened. Erdo?an ignored this traditional timeline, waiting until July 9, over a month after the June 7 election and 17 days after parliament assembled on June 23, to launch the coalition negotiations.

Because of Erdo?an’s ties to the AKP, critics argue that, despite his responsibility to remain nonpartisan, he is stalling the process in order to force a snap election and maintain the party’s grip on power. He has been criticized in the past for his polarizing and partisan tactics leading up to the parliamentary election such as pro-AKP billboards, radio interviews, and rallies.

Without a parliament majority or a minority government, Erdo?an and the AKP will lose their longstanding grip on power. The best way for them to prevent this is to call for early elections in the hopes of regaining control, which it seems Erdo?an and the AKP are strategically positioning for. Recent polling data suggests that, in the case of re-election, the AKP would win 45 percent of the vote as opposed to the 41 percent it received on June 7. While Erdo?an will want to maintain the façade of coalition-building, the prospect of securing an AKP majority through re-election is a much more attractive alternative. 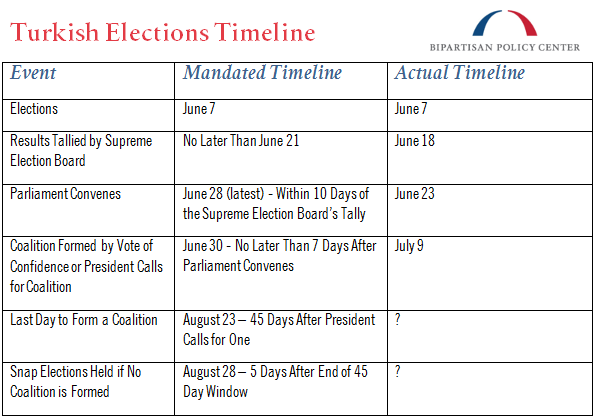 Bombing Forces Turkey to Choose Between ISIS and the Kurds

Turkey and the Kurds: Post-Election Prospects for Progress?