The Importance of Energy Innovation

Advances in energy technologies have played an instrumental role in the growth of the American economy, and many of the technologies we rely on to provide reliable access to clean and affordable energy today have their roots in federal research programs. These programs will continue to be crucial to capitalizing on the multi-trillion dollar opportunity presented by expanding global energy markets. The Department of Energy’s (DOE) network of 17 national laboratories conduct much of the federal government’s cutting-edge energy research and development activities, improving security, increasing economic competitiveness, and cutting pollution.

Yet, as noted in the recent Commission to Review the Effectiveness of the National Laboratories report, an erosion of trust has strained the relationship between the labs and DOE. Pointing to DOE micromanagement that has decreased autonomy within the labs, the commission recommended strengthening Laboratory-Directed Research and Development (LDRD)?an important mechanism to restore autonomy and provide flexibility to the labs that can have a host of benefits. As the report’s authors noted, “the ability to adapt, retool, invest in staff and capabilities, and to enter new research areas is crucial to laboratory performance and the maintenance of high-quality staff and research.”

What Is Laboratory-Directed Research and Development?

Laboratory-Directed Research and Development is a congressionally authorized program under which the national laboratories use a highly competitive application process to select research projects that are designed, implemented, and led by employees. The program began in 1977 under the Energy Research and Development Administration Appropriations Act and various caps have subsequently been imposed on how much funding could be used on LDRD. Most recently, in 2006, overhead costs for LDRD projects were included into the spending cap, a process known as burdening; under the Consolidated Appropriations Act of 2014, the cap was reduced from 8 to 6 percent of a laboratory’s budget. The “burdening” in 2006 and the reduction in 2014 reflects millions of dollars of cuts to innovative research for some labs that could have long-term consequences on the labs’ efficacy. The current draft of the Energy and Natural Resources Act of 2017 would “unburden” LDRD costs by removing overhead expenses from the spending cap.

LDRD work has resulted in at least two Nobel Prizes and fosters an invigorating research environment. In fact, many of the national labs credit LDRD for providing the single largest source of capability investment and for directing resources towards vital scientific challenges. Although primarily funded through DOE, LDRD research is also funded through the Department of Defense, National Institutes of Health, and other federal and non-federal sources. The effectiveness of LDRD and similar models have been demonstrated by private industry as well?Bell Labs routinely designated approximately 10 percent of all research and development funds as “block funding” that empowered researchers to pursue new directions in their work. Google has encouraged employees to devote a fifth of their time to follow innovative ideas of their own. The creative freedom afforded to world-class researchers by these models has enabled significant and tangible success.

One of the ways to evaluate the effectiveness of a research program is to monitor outputs. Research and development, although often thought of as monolithic, are different in their objective and approach. Research focuses on a fundamental understanding of how something operates, often with the goal of advancing the frontier of knowledge in a given field. The best representation of success in this pursuit is generally considered to be publishing in a peer-reviewed journal. Development, on the other hand, seeks to take existing knowledge about basic science and apply it to a real-world problem. While this can also result in peer-reviewed research, typically filing a record of invention or a patent application is a better metric for development projects.

LDRD projects across the national laboratories vary considerably in size and output depending on their R&D profile. In reviewing the efficiency of R&D dollars for 13 of the largest LDRD programs, all but two laboratories achieve a better efficiency (in terms of total LDRD funding divided by publications produced) than the national average. The majority of LDRD research is also more efficient than the average among OECD countries. There are also striking results when comparing LDRD outputs to overall lab performance. In three of the largest LDRD programs (Sandia, Lawrence Livermore, and Los Alamos national laboratories), LDRD funding accounts for about 6 percent of the overall funding but results in between 22 and 30 percent of the total publications and 27 to 50 percent of the total patents across the entire laboratory. 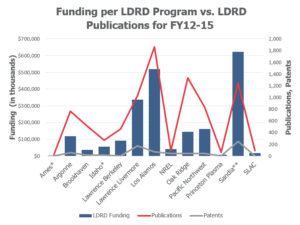 Examining research outputs alone cannot adequately tell the story of innovation. Historically, LDRD programs have pioneered world-changing research with significant impacts on our economic and national security. In the field of bioenergy, a $484,000 LDRD project at Lawrence Berkeley National Laboratory laid the foundation for a $500 million grant from British Petroleum that created the Energy Biosciences Institute, which has developed a new way to make diesel-like fuels via fermentation. LDRD projects dating back to the 1990s gave rise to Sandia National Laboratory’s excellence in the field of supercomputing. These critical capabilities include being able to model and predict national security issues such as weapons simulation, stockpile stewardship, nonproliferation, and energy security.

More recently, researchers at Pacific Northwest National Laboratory designed a microscope?which can be 3D printed and attached to a smart phone?that quickly and accurately enables field workers to respond to a potential biological threat. Their method is four times faster and costs pennies on the dollar compared to current biothreat assessment methods. The time saved translates directly into the number of potential lives saved. Meanwhile, the National Renewable Energy Laboratory has developed a breakthrough approach in manufacturing materials for solar cells. Working with industrial partners they will enable higher efficiency at a lower cost, making terawatt solar projects eminently possible.

Laboratory Directed Research and Development plays an irreplaceable role in helping our National Labs retain world-class talent, break into new research fields and ultimately maximize their potential impact on the nation’s future. Expanding the LDRD program would be an important step toward restoring some of the flexibility and autonomy of the national labs. The success of projects funded through LDRD point to the inescapable conclusion that they’re a crucial to the success of the national labs and, by extension, the country.

For more information on the data used in this piece, please see the Appendix.

Energy Innovation | By the Numbers