As Congress and the Trump administration consider the role that public-private partnerships (P3s) will play in a federal infrastructure package, a recent vote by the Texas House of Representatives highlights some of the challenges of expanding the use of P3s in the United States. These issues will need to be addressed if we are going to attract more private investment to help address our infrastructure needs.

The debate on the Texas bill showed that P3s are not a strictly partisan issue, as Republicans and Democrats spoke both for and against.

On May 5, the Texas House voted down a bill to extend the authorization for 18 highway projects to be done under Comprehensive Development Agreements, a form of P3 which involves the private sector assuming the risk and responsibility of building and maintaining a road in exchange for the ability to collect tolls from road users. The debate on the Texas bill showed that P3s are not a strictly partisan issue, as Republicans and Democrats spoke both for and against. However, many votes did line up along party lines, with the overwhelming majority of “no” votes coming from Republicans and most of the votes in favor coming from Democrats?an interesting twist, given that in the national dialogue on P3s, Democrats have generally been seen as less supportive than Republicans. Moreover, there was a distinct split between urban and rural representatives; 80 percent of rural Republicans voted against the measure while 70 percent of urban Democrats voted in favor. 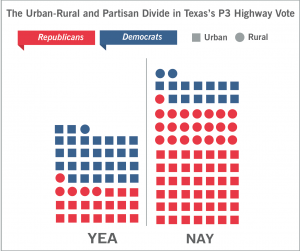 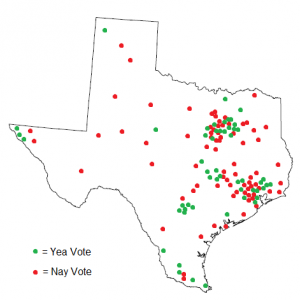 District locations are approximate. Rural and urban designation is based on the US Census Bureau Dataset

The bill sponsors presented P3s as a tool in the toolbox for addressing growing congestion on Texas highways while freeing up limited state dollars for other important projects. According to State Rep. Larry Phillips (R-Sherman), the chief sponsor, allowing the private sector to take on the cost and risk of constructing and financing these highways would allow them to be “built within the next decade rather than the next 30 to 40 years.” Opponents cited constituent concerns about tolling and the fear that private companies would profit at the expense of drivers.

The fate of the Texas bill reflects several trends we have written about before. First, it clearly demonstrates the concept of political risk, one of the key barriers to greater private investment in U.S. infrastructure. Projects in the United States must survive frequent election cycles at multiple layers of government, which result in a seemingly endless series of chances for a project to be stopped in its tracks. Texas has gone so far as to enshrine political risk into its P3 development process: its legislature enacted a moratorium in 2007 on toll road P3s, from which specific projects can be exempted by a legislative vote. Private companies are understandably reluctant to commit millions of dollars of pre-development funds to projects that may or may not survive a political vote.

Second, public misunderstanding of P3s?and more fundamentally, of the costs and risks of upgrading and maintaining infrastructure?continues to be a problem. The benefits of the 18 potential P3s?which, as State Rep. Victoria Neave (D-Dallas) noted, would include faster commutes, less time spent in traffic, and more time with family?were drowned out by the opposition to tolls. The idea that drivers should not have to pay both a gas tax and a toll was a recurring theme, even as Phillips explained that gas taxes and other fees were not providing enough revenue to pay for all of Texas’ infrastructure needs.

Importantly, opponents cited the bankruptcy of the private partner who invested in Texas State Highway 130. However, this actually demonstrates why local and state governments may want to consider P3s: the private partner assumed the risk that the road would be underutilized; meanwhile, the state continues to receive a portion of the toll revenues and the road remains available to drivers.

The Texas vote, while a setback for the affected projects, does not signal a sea-change in America’s view of P3s.

The Texas vote, while a setback for the affected projects, does not signal a sea-change in America’s view of P3s. The issues raised in the debate are common concerns that arise whenever the subject of P3s comes up. But these challenges are not insurmountable. The New American Model for Investing in Infrastructure proposed by the Bipartisan Policy Center’s Executive Council on Infrastructure includes several recommendations that, if implemented, would help to reduce the likelihood that future projects will be stopped short:

Following on former President Barack Obama’s support for P3s, the Trump administration has indicated that more private investment in infrastructure will be vital. But if there are actually going to be more P3s, the states must be active partners. Following the recommendations of the New American Model will help states and cities build the tools, trust, and know-how to move P3s forward.

A New Model for Investing in Infrastructure