Representative Dave Camp (R-MI) and Senator Max Baucus (D-MT), the respective chairmen of the House and Senate tax-writing committees, continue to push forward with their work on tax reform. Most recently, Chairman Baucus and his committee’s ranking member, Orrin Hatch (R-UT), penned a bipartisan letter to their colleagues announcing that the committee’s deliberations over a new tax code would start with a baseline of no tax expenditures, calling on senators or others to make case-by-case arguments for why specific exemptions, deductions, credits, or exclusions should be reinserted. Although this type of tax reform ? as advanced by the Bipartisan Policy Center’s Domenici-Rivlin Task Force and the Simpson-Bowles Fiscal Commission ? is often promoted on the grounds that it would create a simpler, fairer, and more growth-conducive system, economists Donald Marron and Eric Toder argue that such a reform should also be viewed as reducing the footprint of the federal government.*

In a recent paper, Marron and Toder lay out their reasoning. They suggest that common measurements of the “size” of the federal government ? such as spending as a percent of gross domestic product (GDP) ? are incomplete and understate the actual funds that the government directs to individuals and entities throughout the economy. For a more accurate picture, the authors contend that a portion of what are commonly-known as “tax expenditures” ? special tax breaks in the code ? must be counted as spending. Some of these targeted reductions in taxes can be utilized in exactly the same way as spending programs to influence resource use ? such as the deduction for charitable donations ? or to make transfers among taxpayers. Thus, Marron and Toder argue, discussions about the proper size of government and about the impact of policy changes on that metric ought to be undertaken with the understanding that the government’s control of resources is not limited to traditional spending programs, but rather extends to “spending through the tax code,” as well.

How big are these tax expenditures? According to the Office of Management and Budget, tax expenditures ? credits, exclusions, exemptions, and deductions that are not part of a “normal” income tax baseline ? will sum to more than $6 trillion from 2012 to 2016, of which the largest ten account for roughly $4 trillion. Marron and Toder are quick to note that, even under their conceptualization, not all tax expenditures can or should be thought of as spending: only six of those largest ten expenditures, by the authors’ measure, function equivalently to government spending programs targeted at specific economic goals.** The rest are more along the lines of general tax policy choices than targeted spending. 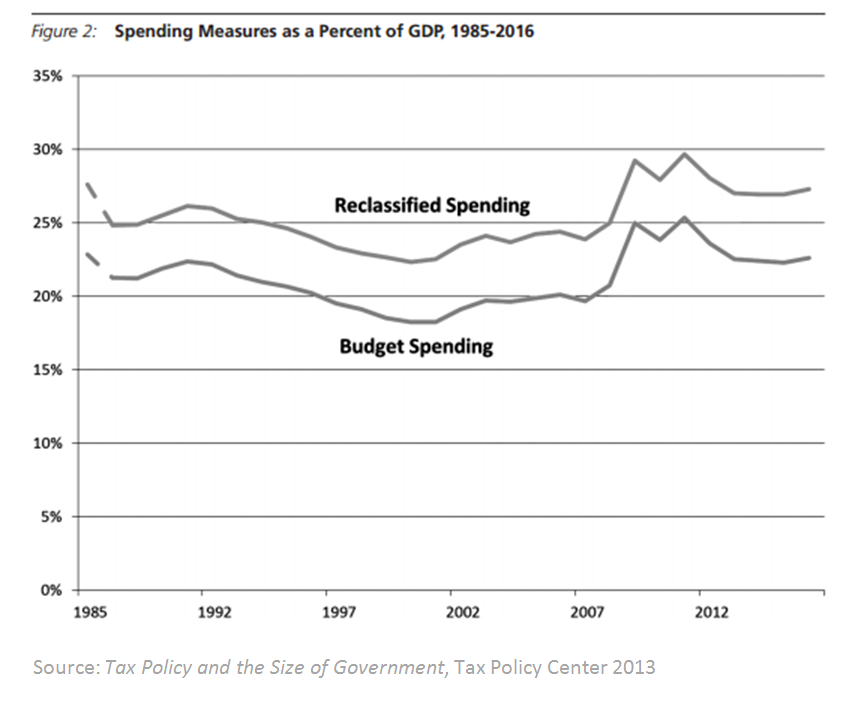 Categorizing certain tax expenditures as spending would change how one might view various policy proposals. The authors consider three possible policy changes: a broad-based carbon tax, elimination of the mortgage interest deduction, and an increase in individual income tax rates. Each of these policies would raise revenue, but have no impact on spending under standard federal budget accounting, thereby leaving that traditional metric of the size of government unchanged. If targeted tax expenditures are classified as spending and included in measuring the size of government, however, some of these policies produce markedly different results. A carbon tax would still have no impact on federal spending, but elimination of the mortgage interest deduction would reduce spending (and thereby the size of government) by withholding federal dollars that would otherwise be distributed to homeowners (in the form of lower tax payments). Finally, an increase in income tax rates would actually increase federal spending, under this expanded definition, as all tax deductions and exclusions would become more valuable to their recipients. Likewise, a reduction in income tax rates would have the reverse effect ? reducing federal spending under this definition.

Important to note is that under Marron and Toder’s metric, the Tax Reform Act of 1986 significantly reduced the size of government in two ways: The reform directly curtailed or eliminated many of the spending-style tax expenditures in the code, and it also lowered the statutory rates, reducing the dollar value of the remaining tax expenditures.

Nevertheless, as a percentage of GDP, spending through the tax code is now back above its 1985 level, due both to new and expanded tax credits, deductions, and exclusions, and to increases in the values of existing ones (as the top tax rate rose from 28 percent in the 1986 reform to 39.6 percent today). As Chairmen Camp and Baucus continue their work on bringing national attention to comprehensive tax reform, Marron and Toder’s important paper presents a new perspective on what could be accomplished. In addition to simplifying the current code, making it more equitable, and encouraging economic growth, policymakers have an opportunity to raise revenue to reduce the debt while simultaneously reducing the size of the federal government and its intervention in the economy.

* Donald Marron was a member of BPC’s Domenici-Rivlin Task Force and Eric Toder served as a consultant to that group.