As prepared for delivery:

Thank you very much, Ron. On behalf of the Bipartisan Policy Center, we’re very glad to be cosponsoring this event with Brookings on such an important issue for the future of our country.

A few months ago, 12 “super” members of Congress set sail on a “super” ship ? their course had been charted, the hull and the rigging were brand new, and the only task those sailors had was to work together to get that ship across the Sea of Debt. For a while, it looked promising. Democrats took steps forward on healthcare and some Republicans crossed their line in the sand on taxes. But eventually, the vessel ground to a halt, and before it started taking on water, the crewmembers on both sides jumped ship. None of them wanted to be stuck on that baby when it sunk, and for good reason. So the Democrats donned their life preservers with big “Ds” on them and Republicans put on the big “Rs.” All of them swam safely to shore as the Ship of State foundered.

The problem is that while both parties may have come away unscathed, America’s economic and fiscal woes have clearly not disappeared with the sinking of that ship.  The economy is still sluggish, and the central drivers of our debt went untouched.

Medicare and tax reform remain the cornerstones of real fiscal reform.  The plan that you will hear about today, Domenici-Rivlin defined support, is a policy that will fundamentally reform Medicare to control its costs while keeping our promise to seniors.  And this coming February, the Bipartisan Policy Center’s Debt Reduction Task Force will be hosting a major event focusing on tax reform and the critical role it plays in restoring our fiscal health.

The framework for a grand bargain is already done. There’s Domenici-Rivlin, Simpson-Bowles, and the Gang of Six ? each of which saves somewhere around 4 or 5 trillion dollars over the decade, and much, much more thereafter. If you don’t like a policy from one, then you can grab a replacement from another, but these three consensus plans tell the same story:  We will not have a solution until we fundamentally reform healthcare to control its costs and we overhaul the tax code to raise significant new revenues.  There are other smaller components to deficit reduction, but as I’m fond of telling people, if you show me a plan, and your plan is missing one of those two big ones, then I’ll tell you “you don’t have a plan.”

Furthermore, the strategy for tax reform is clear. There is broad agreement that we must enact a more pro-growth and progressive system by lowering the rates, but at the same time modifying or eliminating the loopholes and other junk that has been stuffed into the code over the years. The Task Force that Alice and I co-chaired was able to raise substantial revenue to pay down our debt while getting the top individual and corporate rates down to 28 percent. It is doable, and it isn’t rocket science.

But that is not the focus of our gathering today. Just as important as revenues ? and some of us would argue, even more important ? is the necessity of dealing with this very chart. I don’t leave home without it. 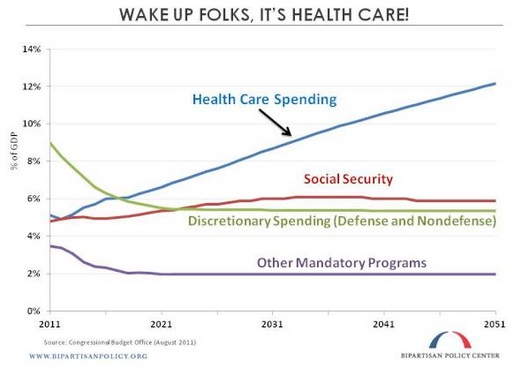 Part of the reason for that line’s steep trajectory is the retirement of the baby boomers.  No one can prevent that from happening, and that is the primary reason that we will need more revenue.  Providing Medicare for 80 million seniors a few decades from now will inevitably cost more than today’s 50 million.

But what we can ? and absolutely must ? address is the continued explosion in cost growth per beneficiary.  The defined support plan that we are here to discuss today does just that.  Over the long run, those costs are what drive healthcare up, up, and away, making it totally unsustainable.

Our proposal would strengthen traditional Medicare by permanently maintaining it as an option for all of our nation’s retirees. At the same time, the new system would expand choice for seniors by allowing the private sector to compete with Medicare.  This will bring seniors better-quality and more-affordable health care choices.

Chairman Ryan and Senator Wyden came out yesterday in support of these principles, and we commend them for their proposal and their bipartisanship.  That is the type of serious policymaking that we’ll need to get us out of this fiscal mess.  We hope that they will continue to prod their colleagues on this proposal, as well as revenue-raising tax reform, in order to restore America’s future.

Alice Rivlin, my dear friend and respected colleague, with whom I have greatly enjoyed working over these past two years, will now share some more details and rationale for our Medicare proposal.