In tax year 2009, college students and their parents left nearly $800 million in tax benefits for higher education on the table. Students and parents filing their taxes this spring will confront the same trio of tax breaks and many will likely make similar errors.

In particular, the Government Accountability Office (GAO) found that for the 2009 tax year, 14 percent of those eligible for higher education tax benefits ? more than 1.5 million returns ? failed to take any credit or deduction and did not claim an average $466 in tax benefits. GAO also found that about 40 percent of those choosing the deduction for tuition ? about 237,000 of the 588,000 returns claiming that particular tax break ? would have lowered their federal tax liability by choosing a different tax break (the Lifetime Learning Credit) and, by not doing so, lost average tax benefits of $284.1

The Law of the Land

Students and parents who want to claim a tax break for higher education currently have to choose among the American Opportunity Tax Credit (AOTC), the Lifetime Learning Credit (LLC), and the deduction for tuition expenses. Each filer can only claim one of these for a given tax year and the value of each varies depending on the student’s circumstances. Both the Camp plan and the Black-Davis bill would eliminate this triumvirate of tax breaks in favor of an expanded AOTC.

The credit is worth a maximum of $2,500 and can only be claimed if the student is studying at least half-time towards a degree. The AOTC is partially refundable (up to 40 percent) and phases down from $2,500 for individuals with income over $80,000 to zero for those with income of $90,000 or above (thresholds doubled for joint filers). The current AOTC applies to expenses only after Pell Grants have first been applied to those expenses, oftentimes lessening the credit’s value.2 (See bottom-most graphic.)

Absent congressional action, the permanent HSC, which is less generous than the AOTC for almost all students, will take the place of the AOTC in 2017.

This deduction is available through the 2013 tax year but expired at the end of the year and, absent congressional action, will not be available for the 2014 tax year. Notably, the tuition and fees deduction is one of the “tax extenders,” which are a collection of about 55 tax breaks that Congress has repeatedly extended in the past but allowed to expire at the end of 2013.

What do Camp, Black, and Davis Suggest?

The proposal on the table would repeal the LLC and the HSC and would not renew the deduction for tuition and fees in favor of an expanded AOTC.  The new AOTC would concentrate its benefits on lower-income Americans by increasing the credit’s refundability, lowering the phase-out levels, and altering the way that Pell Grants are included in the formula. 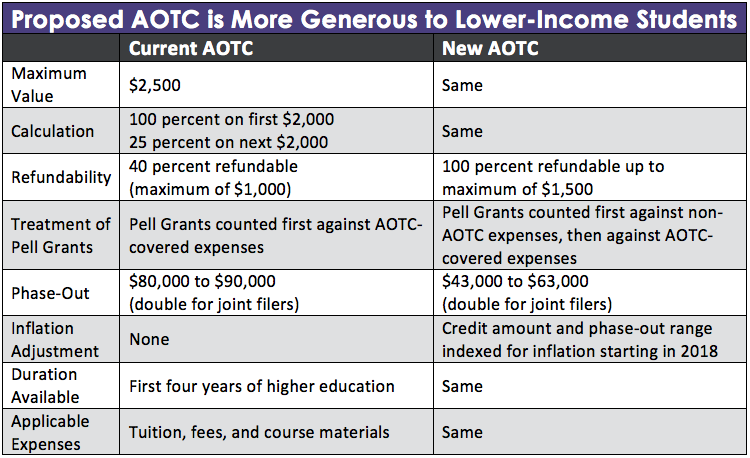 The proposed AOTC would still be worth a maximum of $2,500, but would be 100 percent refundable up to a maximum of $1,500 (rather than having the entire credit be refundable at 40 percent up to $1,000). The proposal would also begin phasing out the credit at about half of the income threshold of the current AOTC ($43,000 compared to $80,000) and would index the phase-out levels and the value of the credit to inflation starting in 2018.

The Black-Davis bill would also increase the generosity of the credit to students who concurrently receive Pell Grants (which are applicable to a wider array of expenses than the AOTC, such as on-campus lodging). Under current law, any Pell Grants ? regardless of what the student applies them towards ? count against AOTC-covered expenses first.

The graphics below illustrate the AOTC benefits gained by an example low-income student who has $8,000 in pre-tax education expenses ? $5,000 of which are covered by the AOTC and $3,000 of which are not. Under the old system, the student would get $1,000 of benefit from the AOTC and would face net expenses ? after Pell Grants and the AOTC are applied ? of $3,000. Under the Black-Davis proposal, however, the student would get $2,500 (the maximum) in AOTC benefits and would have net expenses of only $1,500.3 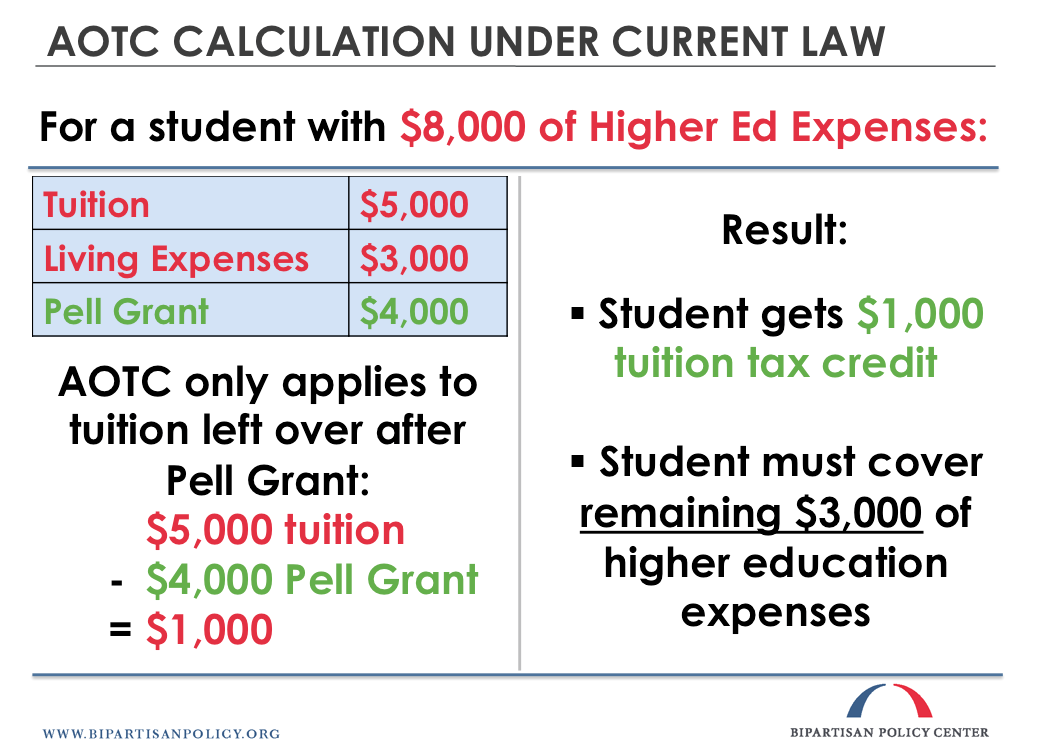 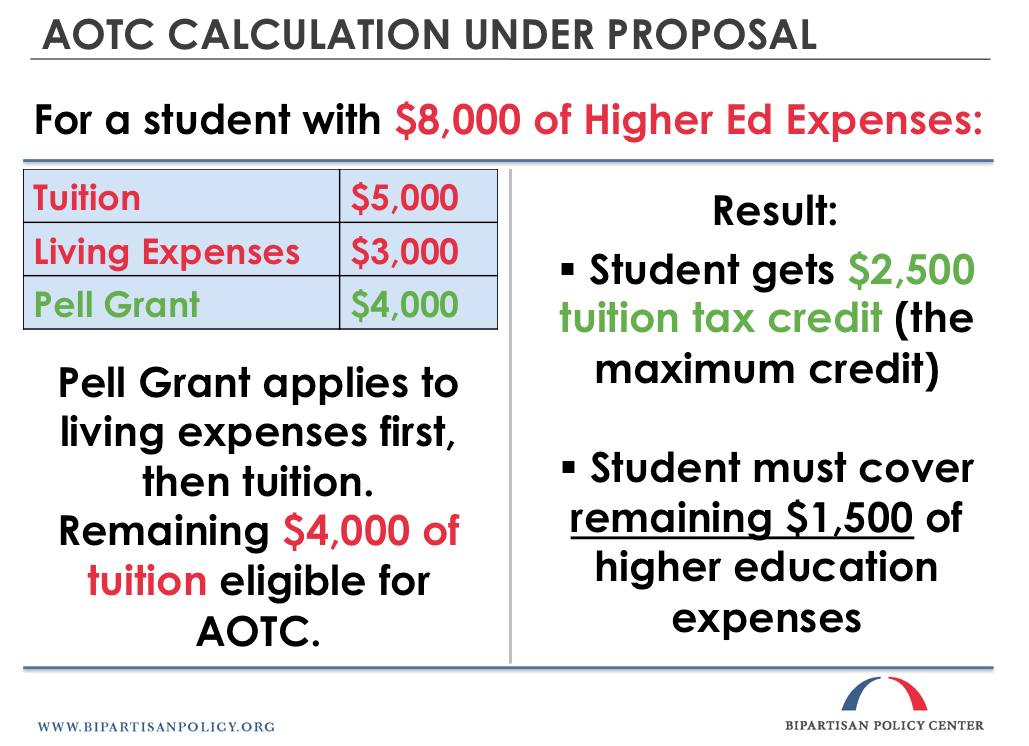 Under this reform, some individuals would get a reduced tax benefit. In particular, students who are not degree-seeking, are not studying at least half-time, or are past their first four years of post-secondary education (such as some part-time, often older, students) would not qualify for the expanded AOTC, whereas they currently qualify for the LLC or the deduction for tuition and fees. Higher-income students (or parents who are paying their tuition) who are less in need of the assistance and incentives would also receive less support.

According to an estimate from the Joint Committee on Taxation (JCT), adopting the new AOTC would cause a net increase in the deficit of $8.7 billion over the period from 2014 to 2023.4 In total, revenues would increase by $29.4 billion and outlays would increase by $38.1 billion over that time period.  (The increased outlays are a result of the enhanced refundability of the credit, which is categorized as spending.)

Incentivizing higher education is a worthy cause, but the confusing set of tax breaks that we currently have is a bad way to go about it. We need to rethink how to provide these incentives. The Black-Davis bill (and its inclusion in the Camp tax plan) is a good, bipartisan example of how these tax breaks might be reformed.

2 Pell Grants are government-provided funds that are given to students with financial need who have not earned a bachelor’s degree. They do not need to be paid back. The maximum award for the 2013-2014 school year is $5,645.

4 The JCT score provided here also incorporates a provision that would exclude the entirety of students’ Pell Grants from their gross income rather than only the amount that is applied to qualified educational expenses. We believe that this element is a fairly small component of the overall scored budgetary impact.