The omnibus spending bill passed by Congress on January 16 has important implications for two financial regulators that are covered by the agreement: the Securities and Exchanges Commission (SEC) and the Commodity Futures Trading Commission (CFTC). Under the agreement, the SEC would be allocated $1.35 billion in 2014, a 2 percent increase over its appropriated 2013 budget but $324 million less than the 25 percent increase the president had requested. Similarly, Congress turned down the president’s request to grow CFTC’s budget by over 50 percent, from $205 million to $315 million, instead increasing it by just $10 million, or less than 5 percent.

This action by Congress continues a long-standing trend. The president has consistently requested, and Congress has consistently rejected (or been unable to agree to), substantial increases for both agencies. As a result, the budgets of both regulators have grown at relatively low rates since 2010, despite the argument that they need additional funds to fulfill their greatly expanded responsibilities under the Dodd-Frank Act. As the figure below illustrates, both agencies saw only modest increases in their funding levels between 2010 and 2013? thanks in part to sequestration reductions? in their appropriated 2013 budgets: 14 percent for the SEC and 16 percent for the CFTC.

While these figures are comparable to the increase in the operating budget of the Federal Deposit Insurance Corporation (FDIC) over the same period, they lag well behind the growth levels enjoyed by the Federal Reserve (Fed) and the Office of the Comptroller of the Currency (OCC). Why the divergence? 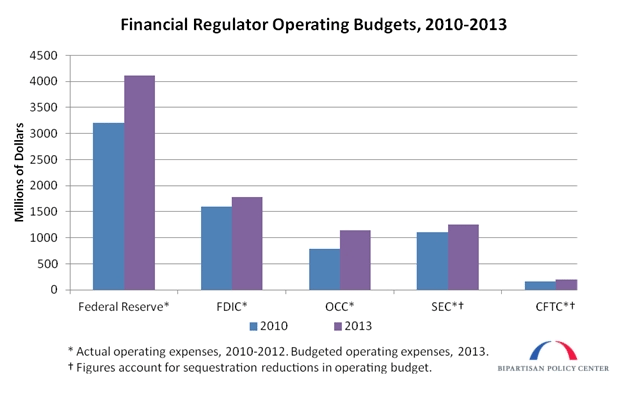 To a large extent, the answer lies in how each agency is funded. The three banking regulators enjoy budgetary autonomy from Congress, with their income deriving mainly from a variety of independent sources such as fees, returns on investments, and in the case of the Fed, income from monetary policy actions. By contrast, the SEC is required to submit all the fees it collects back to the Treasury and instead receive its appropriations from Congress. The CFTC, which does not earn revenue from fees, is similarly reliant on the appropriations process. In an era of fiscal austerity, this leaves both agencies with little opportunity to grow their budgets despite their new responsibilities.

In order to illustrate the funding differences among the agencies, the revenue sources and recent operating budgets of the three banking regulators are outlined below.

The Fed has traditionally derived the bulk of its income through open market operations. In order to control the money supply, the Fed purchases and sells U.S. Treasury securities, as well as debt issued by government agencies and government sponsored enterprises such as Fannie Mae and Freddie Mac. In turn, the Fed earns interest on these assets and may profit from their sale, providing it with a significant source of revenue. Indeed, the Fed earned nearly $80 billion on this income last year. The remainder of the Federal Reserve’s income is generated through the provision of services (such as check clearinghouse services) to banks, interest on loans made to via the “discount window,” and earnings from foreign currency reserves. Since 2012, the Fed has also collected fees (known as “assessments”) on institutions with assets greater than $50 billion.

In contrast to the SEC and CFTC, the Fed sets its own internal budget, deciding how much the Board of Governors and the Federal Reserve Regional Banks will spend. The Board then turns over excess profits to the U.S. Treasury. The Fed spent $4.1 billion on operating expenses in 2013, which represents an extra 3 dollars for every 10 dollars it spent in 2010, when the Dodd-Frank Act was passed into law.

The FDIC’s income is primarily generated from interest earned on the Deposit Insurance Fund (DIF). The DIF is funded through assessments charged on banks and is used primarily to pay for the costs of resolving failed institutions. As of August 2013, the DIF stood at $37 billion, a recovery from a deficit of over $7 billion as recently as 2010. Between 2008 and 2012, the agency also received income from fees and surcharges imposed on participants in the temporary Debt Guarantee Program and the Transaction Account Guarantee Program.

The FDIC has significant discretion in spending the revenue it collects, but in recent years, it has opted to only grant itself a moderate increase in operating expenses. In 2012, it dedicated $1.78 billion of its total revenue, or approximately one out of every ten dollars, to cover agency expenses, with the remainder either used to pay for bank resolutions or contributed back to the DIF. The 2012 operating budget represented an 11 percent increase from 2010.

Office of the Comptroller of the Currency

The OCC is housed within the U.S. Department of the Treasury but is nevertheless independently funded. Its revenue comes almost exclusively through fees imposed on the institutions it regulates: nationally-charted banks and federal savings associations (thrifts). In 2012, 94 percent of the OCC’s revenue was collected through assessments, with the remainder earned through interest on investments.

The agency spent $1.14 billion on operating expenses in 2012 and estimated it would spend a similar amount in 2013. This represents a close to 50 percent increase in its operating budget since the passage of the Dodd-Frank Act, though approximately 7/10ths of that increase can be explained by the expansion of its jurisdiction to cover thrifts following the abolition of their regulator, the Office of Thrift Supervision, in 2011.

The Dodd-Frank Act required the SEC to formulate 95 separate sets of rules and the CFTC to issue 60 new regulations. Most of these rules are highly complex and have, in many cases, taken years to finalize. Moreover, Dodd-Frank greatly expanded the responsibilities of both agencies, particularly the CFTC, which is charged with regulating and overseeing important aspects of the vast over-the-counter derivatives markets. Yet both agencies have received essentially nominal increases since the passage of the Act. Gary Gensler, who was the CFTC’s chairman until earlier this month, stated that as a result “we don’t have the staff to oversee the markets,” while commissioners at the agency have pointed to problems retaining high quality employees in the face of underfunding. Similarly, the SEC has been unable to expand its staff or invest in new electronic filing technology.

By contrast, these types of problems are conspicuously absent at the three major banking regulators. Had the SEC and CFTC been able to collect and retain user fees, they would have been able to grow their budgets ? and therefore their staffs and technological infrastructure – to meet their expanded responsibilities under the Dodd-Frank Act, much as their financially independent banking counterparts have been able to do.

15800
The SEC and CFTC have received marginal budget increases since 2010, despite expanded responsibilities under Dodd-Frank