The House of Representatives has spent the last few days debating and voting on amendments to the Energy and Water Appropriations bill, which passed Wednesday evening by a vote of 227-198. The table below shows the levels of budget authority recommended in the final House bill (for selected programs), along with FY 2013 appropriations levels and the Senate Appropriations Committee’s FY 2014 recommendations. The chart depicts the differences between each chamber’s recommended FY 2014 budget authority and the FY 2013 levels.


View larger versions of the graphics below 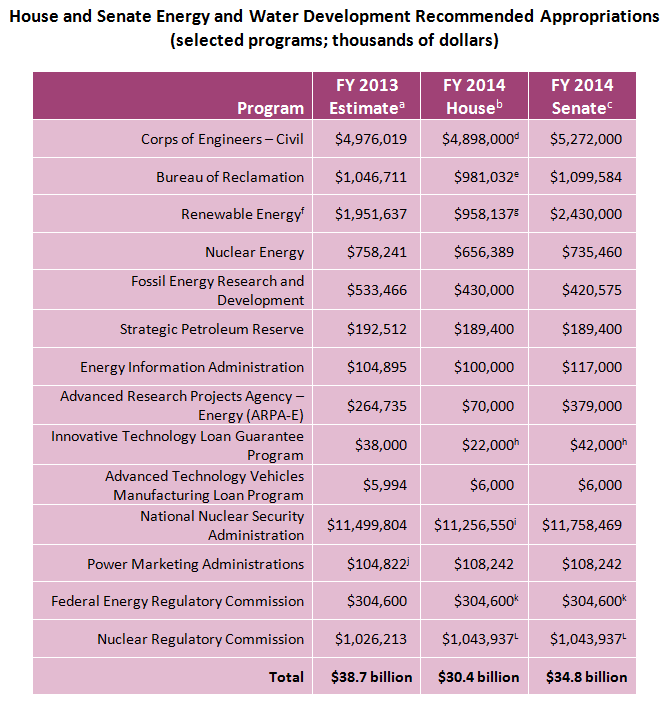 Reference notes listed at the bottom of the post 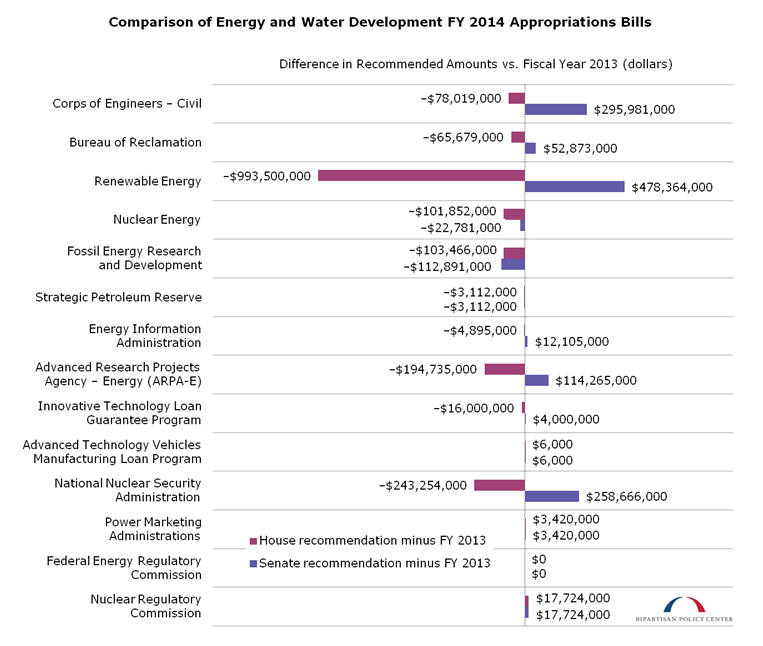 Differences are rounded to the nearest thousand.
All of the notes for the table above also apply to this graphic.

a – The FY 2013 estimates are an average of the FY 2013 amounts given in the House and Senate reports accompanying their respective Energy and Water Development appropriations bills (House Report 113-135 and Senate Report 113-47). For all programs except Power Marketing Administrations (as noted in (j) below), the House and Senate amounts were within 1 percent of one another.
b – These are amended amounts as passed in H.R. 2609 (July 11, 2013).
c – These are Senate Appropriations Committee recommended amounts as presented in Report 113-47 (June 27, 2013).
d – Excludes a $200,000,000 rescission recommended in the bill.
e – The House bill includes some changes to account structure for this program, though the amount here is presented without modification.
f – Due to a new account structure included in the House bill, this item is referenced differently in each chamber; in the House: “Renewable Energy, Energy Reliability and Efficiency”; in the Senate: the combination of “Energy Efficiency and Renewable Energy” and “Electricity Delivery and Energy Reliability.”
g – Excludes a $157,000,000 rescission recommended in the bill.
h – Gross appropriations; with offsetting receipts, net appropriations are $0 in the House bill and $20,000,000 in the Senate bill.
i – Excludes a $142,000,000 rescission from Weapons Activities and a $20,000,000 rescission from Defense Nuclear Nonproliferation.
j – The FY 2013 estimate for Power Marketing Administrations is taken from House Report 113-135 alone rather than an average of the numbers from both reports. Due primarily to a large difference in Western Area Power Administration offsetting collections in the two reports, the Senate number is much larger. Given that the House number is closer to the FY 2014 budget request and the recommended amounts from both the House and Senate, it was chosen for the comparison purposes of this table.
k – For salaries and expenses; with revenues applied, the net appropriation is $0.
l – Gross appropriations; including revenues, net appropriations are $123,216,000.