COVID-19 has damaged many Americans’ personal finances—especially those of women, people with low incomes, people without college degrees, and workers of color. But the impact was so severe in part because too many households are chronically short of savings that could protect them against unexpected losses of income or surprise expenses.

These are among the findings from a new Morning Consult survey commissioned by BPC—conducted in partnership with Funding Our Future and Edelman Financial Engines—for America Saves Week, an annual week-long effort focused on helping Americans save more and highlighting how employers and policymakers can facilitate saving. The survey reveals an alarming picture of Americans’ low savings, inadequate access to savings vehicles, wide disparities in savings and account access, and a broad desire for tools that could help build savings to protect them when the next crisis—whether national or personal—hits. This evidence further underscores the urgent need for policymakers and corporate leaders to implement solutions that can make workers more financially secure.

Thanks to the massive federal response to the health and economic crisis, overall incomes and savings for U.S. households have actually increased over the past year. These averages, however, conceal the fact that many Americans have suffered immensely during this time.

In general, the same pattern repeats across all questions that asked about personal finances in 2020: Workers who were already more likely to be struggling fared worse. Workers with low incomes, those without college degrees, workers of color, and women (for simplicity, “disadvantaged workers”) were all more likely to report financial distress over the past year. Figure 1 breaks down a summary measure—whether someone’s financial situation has gotten worse over the past 12 months—by demographic.

BPC’s survey reveals a nation in which a large share of the population is struggling to save money and achieve financial security. 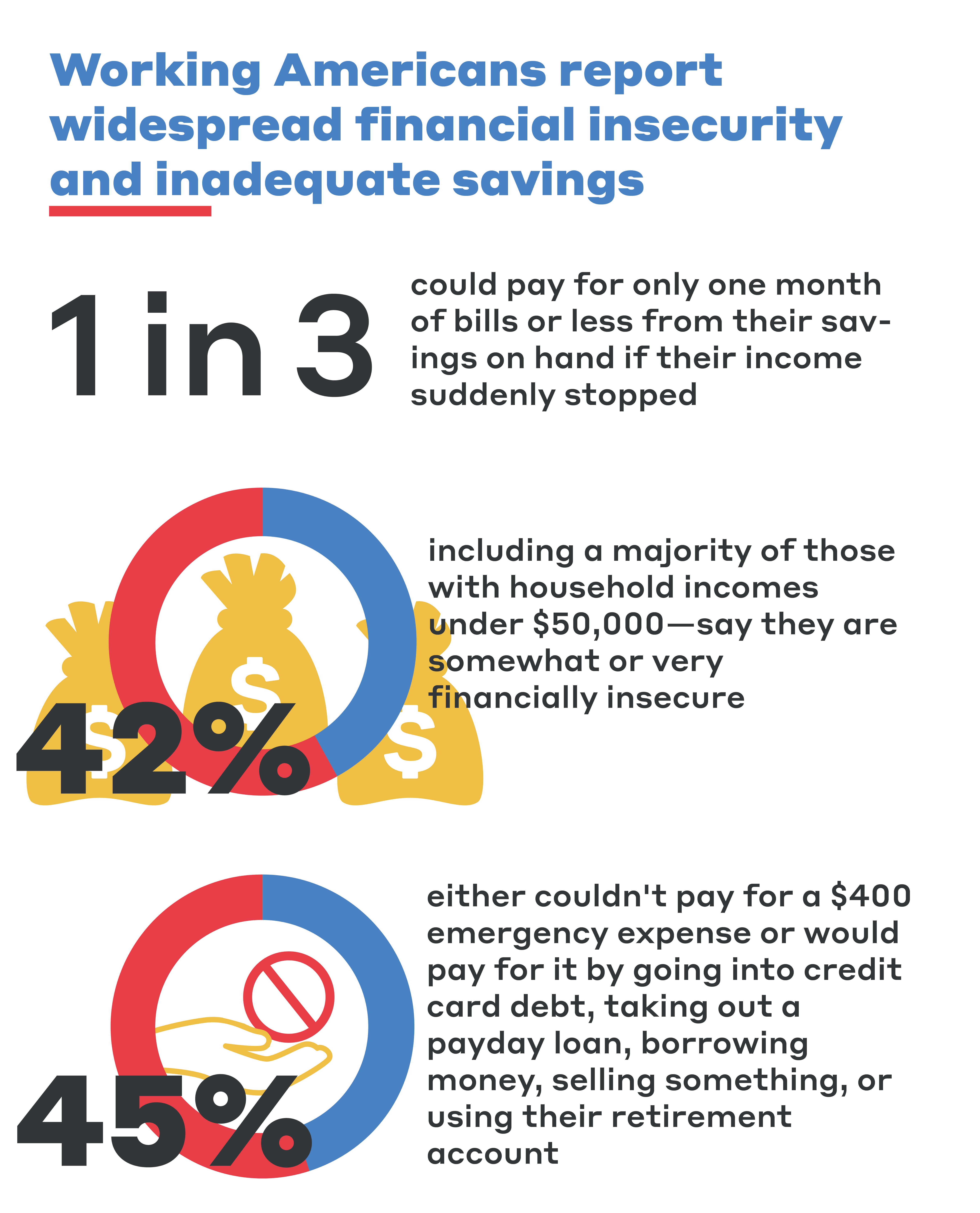 People with low incomes, workers without college degrees, and workers of color have more volatile incomes and more tenuous job security. Thus, they are most in need of a buffer of savings. Perversely, however, these Americans’ lower incomes make it especially hard for them to pay their bills, let alone put money aside to save. This combination leaves such workers both particularly exposed to negative shocks and particularly vulnerable when those shocks arrive.

For instance, BPC’s survey finds that 43% of adults in households with incomes less than $50,000 a year report having no money set aside for emergencies, compared to only 8% of respondents in households earning more than $100,000.

This lack of savings is a lack of protection against the unexpected. If workers lost their source of income, nearly half (44%) of those in houesholds making less than $50,000 per year report that they could pay their bills for approximately one month or less out of their savings on hand. Meanwhile, 59% of Black respondents say they either couldn’t fully pay for a $400 emergency expense or would do so by going into credit card debt, taking out a payday loan, borrowing money, selling something, or turning to their retirement accounts (compared to 42% of white respondents).

As Figures 2 and 3 show, disadvantaged workers are far more likely to feel financially insecure, and this insecurity is related to a remarkable lack of savings. The large disparity in financial wellbeing between women and men in these indicators is particularly striking.

Share who say they are somewhat or very financially insecure

Figure 3: Many disadvantaged workers have no emergency savings

Share who say they have no money set aside for emergencies

Consistent with other sources, BPC’s survey finds that only 67% of workers report having the opportunity to contribute to a retirement plan through their employer.1 Workplace retirement plans are an essential, tax-advantaged savings vehicle, and far too few Americans have access to one.

But as our survey shows, Americans need help not only saving for retirement, but also for emergencies. One promising tool to help them is an employer-based emergency savings account. Similar to 401(k)s, these accounts have the power of being linked to payroll, which means that, with a worker’s permission, employers can deposit a share of each paycheck directly into an emergency savings account that the employee could access, penalty-free, at any time. Figure 4 shows that far more Americans want this opportunity than currently have it.

If anything, Figure 4 understates the gap between how many workers want their employer to offer emergency savings plans and how few have the opportunity today. The top bar shows that 42% of Americans want to be automatically enrolled in such plans, but another 14% are open to the idea (“don’t know”), and even more would likely want the option of contributing without automatic enrollment. Meanwhile, the bottom bar shows that 22% of survey respondents report that their employer offers such a plan, but anecdotal evidence suggests the true share is lower. Emergency savings accounts are new and haven’t been adopted widely—large organizations have only recently begun rolling out these offerings—suggesting that respondents may not have learned to distinguish them from direct deposits into their checking accounts. Figure 4 is thus qualitatively suggestive but likely understates the scale by which demand for employer-based emergency savings plans exceeds availability.

* Question text: “Would you want your employer to automatically divert a small portion of your paycheck into an emergency savings account at work that you could access at any time?”

** Question text: “Some employers let their employees place money from their paycheck into an emergency fund that’s separate from the retirement plan. With this emergency fund, you can access the money penalty-free anytime. Does your employer offer this type of account?”

In short, Americans are keenly focused on building emergency savings, and they want their employers to offer vehicles to help. Unfortunately, the widespread desire to save more for emergencies may reflect the fact that workers find it so hard to do so.

Table 1 shows that despite widespread desire for access to workplace savings vehicles, the Americans who most need help building their savings are least likely to work for an employer that offers them.

These survey results make clear that Americans need help saving. The private sector and policymakers have both an opportunity and an obligation to make saving more accessible and feasible. There must be a focus on how to boost workers’ financial resiliency—especially for workers who find it hardest to save.

Building emergency savings through payroll deduction allows employees to commit once to saving and then automate their desired behavior—rather than trying to find money to save every time they receive a paycheck. Because workers without emergency savings often withdraw from their retirement accounts in a crisis, greater emergency savings can shield their retirement savings. The private sector can play a major role in expanding this option. Indeed, some companies are leading the charge in offering this benefit to their workforce, and BlackRock’s foundation has an entire initiative (of which BPC is a part) to expand the availability of emergency savings.

This year, America Saves Week arrived in a nation with meager savings, poor financial security, and disparities between the thriving and the struggling—longstanding dynamics exacerbated by the pandemic. With urgent policy and political focus, however, we can ensure that this dedicated week, when it rolls around in future years, finds Americans in better financial health.

Morning Consult surveyed 1,599 adults who were employed in January 2020 and/or currently employed (for simplicity, “workers” or “working adults”). The survey took place in late January and early February of 2021. The margin of error for the full sample is +/- 2%.

1 The denominator excludes the 7% of respondents who didn’t know whether their employer offers a plan. The most obvious reason why someone wouldn’t know whether they have access to a plan is that they don’t, so this may slightly overstate the share of workers with plan access.