Beginning on January 2 of next year, the Fiscal Year 2013 sequester will cut $55 billion from non-defense spending. Of this, $39 billion will come from discretionary accounts. This will:

The remainder of the domestic cuts will come from mandatory spending:

Based on Congressional Budget Office data, we project that the non-defense and defense sequester combined could:

The majority of the jobs lost will be in the private sector.

Further, the majority of the private sector job losses are likely to be in the non-defense sector.

More specifically, according to the Office of Management and Budget, under the sequester:

Additionally, the Department of Health and Human Services recently stated that with sequestration:

The Impacts Are Already Being Felt

Businesses and government departments must prepare for layoffs in advance and will likely send out notifications shortly before November elections. 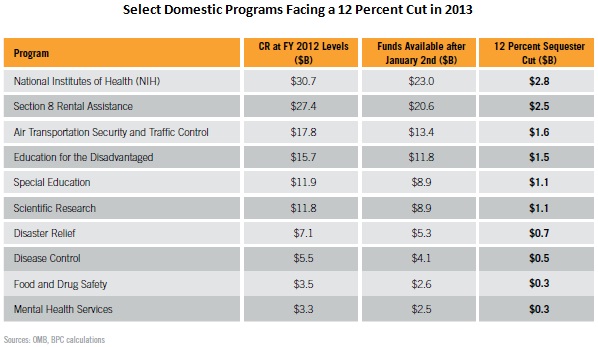 The Coalition for Health Funding is leading a group of nearly 3,000 national, state, and local organizations in bringing attention to the potential impact of the sequester cuts on non-defense discretionary programs. They have urged Congress to avert sequestration by adopting a “balanced approach to deficit reduction that does not include further cuts to NDD programs.” Read their letter here.