Last week, at the House Republican retreat in Williamsburg, VA, members of the leadership team announced that they were considering a short-term increase in the debt limit that would allow Congress to address several other budget-related deadlines first. These include the automatic across-the-board sequestration cuts set to take effect March 1, the March 27 expiration of the continuing resolution to finance the federal government for the current fiscal year, and the April 15 deadline for a congressional budget resolution for the next fiscal year.

Today, the House of Representatives approved a bill (H.R. 325) that seeks to implement the short-term debt limit increase while forcing the Senate to pass a budget resolution this year, which that chamber has not done since 2009.

The Bipartisan Policy Center (BPC) notes that the debt limit provisions are novel, contain substantial complexity, and may have implications that we have not foreseen. The following is BPC’s initial interpretation.


Fiscal Timeline Under Passage of H.R. 325


Scroll over each entry below for more details

// check which background gradient to use for date on the left

// if no over lay - don't do anything with the link. No hover, no roll-over, no bubble

All estimates assume BPC’s most likely interpretation of H.R. 325 and that the bill is passed before February 1.

What follows is a more detailed explanation of this new approach, along with some questions that remain.

A New Approach to the Debt Limit

With respect to recent history, the House bill is a somewhat new approach to the debt limit. In the past, Congress has almost always increased the limit by a specific dollar amount.** H.R. 325 would instead select a specific date (in this case, May 19, 2013) and increase the debt limit by the amount needed to finance federal obligations up to that point (minus the outstanding Extraordinary Measures in use on the date of enactment).

Under the conventional approach of raising the debt limit by an exact amount, the time between enactment of a debt limit increase and when the debt limit would be reached again was mostly dependent on two variables: the dollar amount of the increase and the future operating cash flow (the difference between revenues collected and expenditures made) of the federal government.***

Under the approach in H.R. 325, however, the date at which the debt limit will next be reached is known in advance, but the dollar amount of the increase is unknown and would be based on projections of federal operating cash flow and changes in intragovernmental debt.

How It Would Work

The House GOP approach would be implemented by suspending the debt limit upon enactment of H.R. 325 and through May 18, 2013. In other words, after enactment, Treasury would be able to return to issuing debt using normal operations to finance the government. This bill would be just like other debt limit increases in that respect. Treasury would immediately begin unwinding the Extraordinary Measures that it started using on December 31, 2012, including making legally-required reimbursements to funds for suspended investments (such as the Thrift Savings Plan G-Fund) and for the interest that would otherwise have been earned.****

On May 19, absent further action by policymakers, the debt limit would come back into force, and rather than “snapping back” to the existing $16.394 trillion ceiling, the limit would be at a new, higher level. What that level would be and what would occur at that point in time (absent a further increase in the debt limit before then) are two important questions.

The reinstated debt limit on May 19 would be increased from the previous limit to cover new debt issued to meet commitments that were due before May 19, net of any outstanding Extraordinary Measures on the date of H.R. 325’s enactment. For example, if Treasury issues $475 billion in additional debt to cover payments due before May 19 and there are $25 billion in outstanding Extraordinary Measures in use on the date of the legislation’s enactment, then the debt ceiling would increase by $450 billion on May 19. This means that on May 19, the total debt subject to limit that the U.S. has accrued would be scheduled to exceed the newly-imposed debt ceiling level. 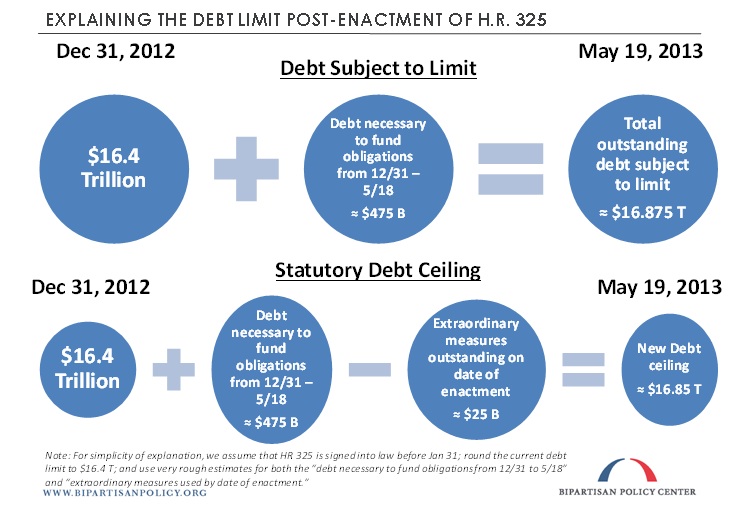 At that time, based on an initial review of the bill, BPC’s interpretation is that Treasury would be able to issue a new Debt Issuance Suspension Period (DISP) and once again begin using Extraordinary Measures. Because of the mismatch cited above, Treasury will immediately either need to use some Extraordinary Measures to stay under the new limit or use cash on hand to redeem some outstanding debt.

If H.R. 325 is enacted before the end of January, BPC projects that these measures would provide Treasury with sufficient funds to meet all federal financial obligations through at least the end of July. BPC also estimates that the magnitude of this debt limit increase would be approximately $450 billion.

Finally, the proposed legislation includes an important qualification: The debt limit increase will only cover the issuance of debt “necessary to fund a commitment incurred by the Federal Government that required payment before May 19, 2013.” This effectively prevents Treasury from issuing large amounts of debt to the public in the days before May 19 to stockpile cash to pay bills that are due after May 19.

About That Budget Resolution

H.R. 325 also includes a provision designed to spur the Senate to pass a budget resolution this year. The bill would withhold congressional pay for the members of a respective chamber of Congress that fails to pass a budget resolution ? a plan for spending and revenues for the coming fiscal year ? by April 15. Under the Congressional Budget and Impoundment Control Act of 1974, failure to adopt a conference agreement on a budget resolution by April 15 generates procedural speed bumps in the Congress, but those consequences have been regularly waived in years when such agreements have not been reached. This new legislation does not require that the House and Senate agree on a conference agreement on a concurrent resolution, but merely that each chamber pass its own.

A major potential issue with the incentive described above is that the Twenty-Seventh Amendment to the Constitution limits the ability of Congress to make changes to member compensation for the current term. Since ratification, changes (including pay cuts) have only gone into effect after the next session of Congress had begun. The drafters of H.R. 325, however, tried to address this issue by including a provision (Section 2. Holding Salaries of Members of Congress in Escrow Upon Failure to Agree to Budget Resolution) proposing to hold members’ pay in escrow for a period of time (beginning April 15), and then paying those funds out on the date that a budget resolution is passed or the last day of the 113th Congress (at the end of 2014), whichever comes first.

No one on BPC’s economic policy team is a legal scholar, but whether this approach is actually constitutional may be open to question, and if it were actually to go into effect, members of Congress could potentially sue to have it overturned . Furthermore, there is no severability clause included in the legislation.

* Some are interpreting the debt limit provision in H.R. 325 to mean that the debt ceiling would increase on May 19 by the full amount necessary to cover all outstanding debt subject to limit at that point in time. This is a plausible reading and, assuming that the bill is passed quickly, differs only modestly from BPC’s current analysis, which is effectively that those Extraordinary Measures outstanding on the date of H.R. 325’s enactment will not be available again after May 19. At this point, however, no one can be certain about what the final interpretation of the statute will be.

** During a debt limit event in 1996, Congress temporarily exempted from the limit any debt issued in order to pay Social Security benefits.

*** The timing of reaching the debt limit is also dependent on changes in intragovernmental holdings of debt, which include securities in the Social Security and Medicare trust funds and are covered by the statutory debt limit.