Under the Trump administration, there has been a notable increase in immigration enforcement actions by U.S. immigration and Customs Enforcement (ICE). With this increased activity has come increased scrutiny. Reports calling attention to the types of locations, such as courthouses and hospitals, where arrests are being made, has led to a debate about where ICE should and should not exercise its power.

Immigration advocates claim that ICE is conducting its activities in locations previous administrations deemed off-limits, and some so-called “sanctuary jurisdictions” believe they are increasingly being targeted for enforcement. To enhance public trust and community safety, the Department of Homeland Security maintains non-binding guidelines outlining policies for “sensitive locations.” While advocates fear the types of covered locations is too narrow, ICE has stated that they can and will overrule these guidelines when deemed appropriate.

As Figure 1 shows, the list of sensitive locations in ICE policy guidelines includes religious sites, hospitals, and schools. The guidelines do not include spaces such as public transportation stops or courthouses, nor do they allow for protection when persons are in transit to and from sensitive locations. 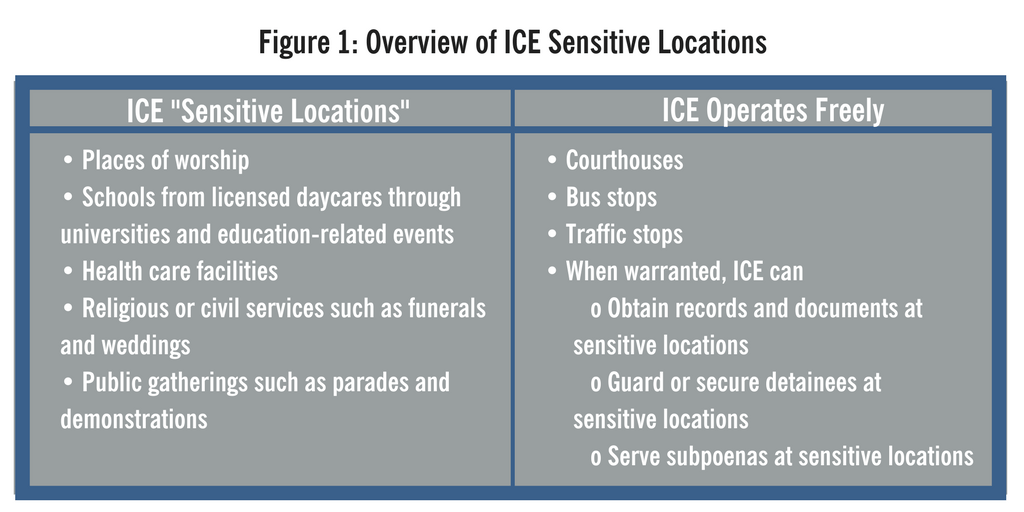 While this policy appears to be straightforward, interpretations diverge significantly between ICE and immigrant advocates. For instance, public school districts in New York and Los Angeles, building on their sensitive location status, adopted “sanctuary policies” to protect undocumented students in their facilities. These policies include protocols for responding to requests from law enforcement, and assurances that student immigration data will not be collected. While these policies do not formally prohibit ICE agents from entering the school districts’ facilities, they demonstrate how advocates can take a more expansive view of the protections that exist under the sensitive locations policy.

ICE’s interpretation of these policies, which, again, do not exist in law, allows for significantly more leeway to enter sensitive locations. For example, ICE can take enforcement action in sensitive locations if urgent circumstances exist, other law enforcement actions bring officers to this location, or a supervisory official has given prior approval. Legal experts emphasized that ICE policies on sensitive locations are a set of discretionary guidelines that are largely symbolic. There are no measures in place to prevent agents from disregarding the guidelines, if they deem it necessary.

Misconceptions about the policy extend to non-sensitive locations, which immigrant advocates have portrayed as sensitive ones, such as courthouses. In February 2017, ICE agents arrested a woman in Texas who was seeking a protective order in a courthouse against an abusive partner. El Paso County Attorney Jo Anne Bernal spoke out against the courthouse arrest, describing it as unprecedented for immigration authorities to take enforcement action during a protective order hearing. A spokesperson for ICE defended courthouse arrests, stating that courthouses aren’t actually sensitive locations, and that such enforcement actions occur when investigating officers have exhausted all other options.

ICE agents determine where and how to make arrests on a case-by-case basis. They  must consider several variables including: the target’s criminal history, sensitivity of the location, and safety for officers and bystanders. In the case of courthouses, ICE noted that the security check points create a safer environment for arrest than public spaces, and the lack of cooperation from local law enforcement has driven federal agents into courthouses. In short, ICE has the authority to operate in these locations even if these actions target potentially vulnerable populations.

In light of the increased ICE enforcement activity in and near sensitive locations, Rep. Andriano Espaillat (D-NY) introduced the Protecting Sensitive Locations Act (H.R. 1815). The legislation would limit immigration enforcement actions at sensitive locations, and redefine them to include: any location where school children are present, government buildings, and any organization that provides social services to vulnerable populations. The legislation would address the non-binding nature of existing ICE policies, by specifically outlining the powers of immigration authorities in sensitive locations, and significantly limit their discretionary power over the policy.

It remains unclear whether Congress will take any action on sensitive enforcement locations. However, the debate over these spaces, as well as sanctuary cities, are pieces of a greater discussion over the appropriate relationship between the federal government’s responsibility to enforce immigration laws and the local authority’s charge to provide for the safety and well-being of their community.