While U.S. policymakers’ attention has been focused on Turkey’s response, or lack thereof, to the conflict raging in Iraq and Syria, there have also been significant developments in the country’s domestic politics worthy of attention. Having taken over the presidency, Recep Tayyip Erdo?an continues to consolidate power, undermine the rule of law and wear down any separation of powers.

In particular, the battle for Turkey’s judiciary continued on October 12, 2014 with elections for members of the Supreme Board of Judges and Prosecutors (HYSK), the body tasked with overseeing the major functions of the Turkish judiciary. Ahead of the elections, the Turkish government poured considerable resources into stacking the board with its supporters.

They succeeded. Pro-government figures now hold a comfortable majority on the 22-member board. Immediately following this win for the ruling Justice and Development Party (AKP), the Turkish government continued its overhaul of the judiciary by passing a controversial package of amendments, further diminishing the independence of the judiciary and expanding police power. Meanwhile, pro-government judges flexed their newfound power by opening investigations into the opposition.

HSYK is central to the administration of law and justice in Turkey. It oversees the legal curriculum for students, admission into the legal profession, as well as the appointment, promotion and disciplining of judges and prosecutors. As Turkey’s judicial system does not include juries, judges are the sole arbitrator of all legal cases. Thus, HSYK’s control over the selection of judges grants it de facto sway over the administration of justice. Its independence is a central component of Turkey’s system of checks and balances.

In February 2014, the Turkish Grand National Assembly approved a bill designed to restructure HSYK. The new legislation changed the composition of the board and the selection of members, and it gave the Minister of Justice the ability to unilaterally issue decrees in HSYK’s name, decide on disciplinary action against members of the judiciary and wholly set the agenda for all board meetings. Many in the judiciary, political opposition and international legal circles argued that these reforms were unconstitutional. 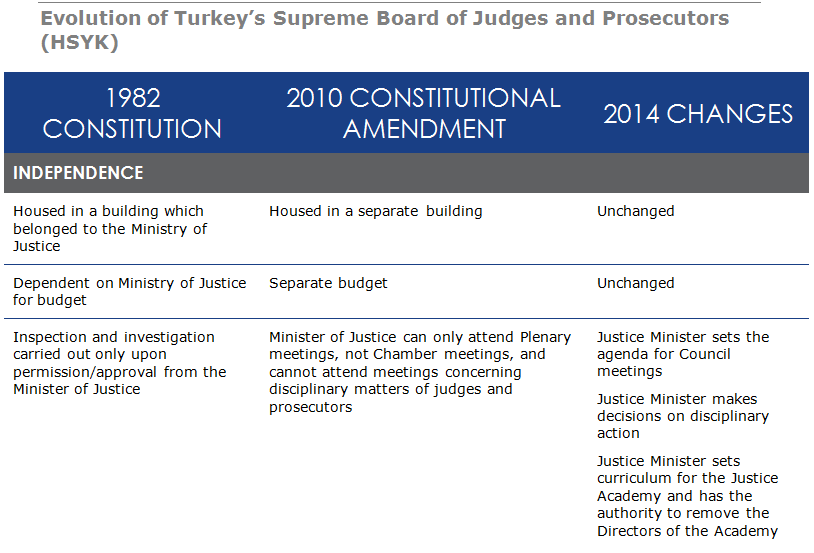 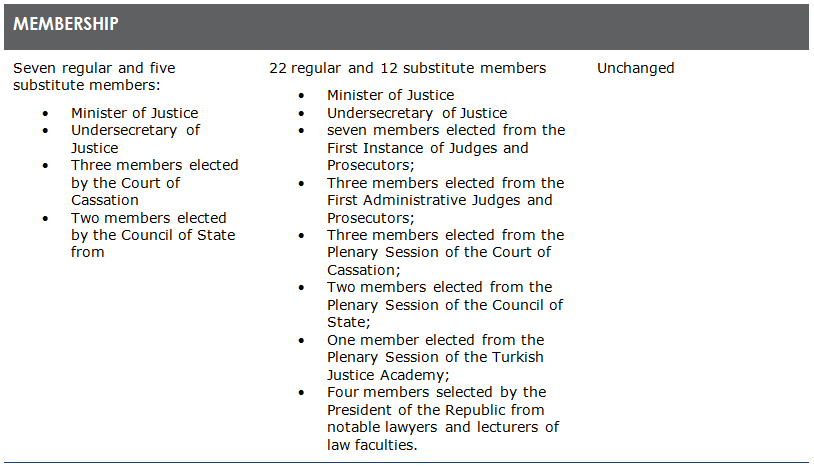 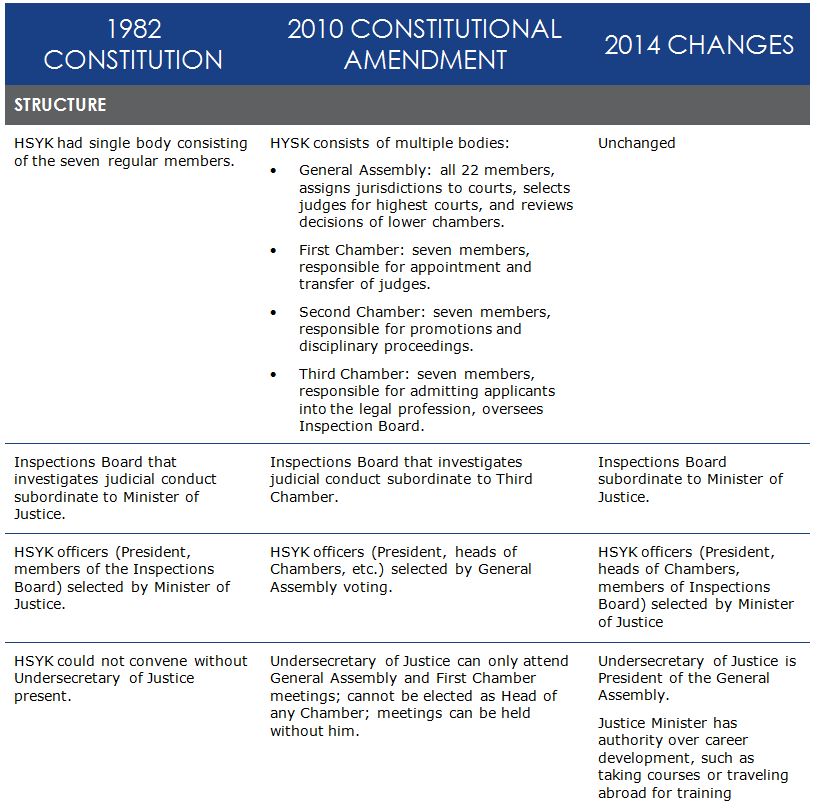 For more information on HSYK, its structure and function, and the 2014 reforms see BPC’s analysis on

The term for the previous HSYK members expired in October, giving the Turkish government an opportunity to repopulate the entire board with its supporters. Under the structure of the new HSYK, the board consists of 22 members and 12 alternate members. Out of that number:

In mid-September, the Supreme Court of Appeals and the Council Estate HSYK appointed their allotted members to HSYK. Some of these new members were allegedly affiliated with the Gülen movement. Led by Islamist scholar Fethullah Gülen, members of this movement were previously allied with the AKP but have since become one of its chief critics. They are believed to have been over-represented in the Turkish government, particularly the judiciary, allegedly controlling 80 percent of the previous HSYK board. The Gülen movement’s early electoral success in the HSYK selection process upset AKP government officials such as Davuto?lu and Erdo?an (though, technically Erdo?an has cast off his party membership in order to fulfill the role of the presidency), who helped sponsor numerous campaign programs aimed at winning the larger October 12 elections.

Leading up to that vote, President Erdo?an, Prime Minister Davuto?lu and Justice Minister Bekir Bozda? all campaigned on behalf of pro-AKP candidates and used government powers to try and influence the vote. Police officers distributed leaflets on behalf of government-backed candidates. A TL 1,155 raise in salaries was promised to judges and prosecutors to buy goodwill for the government. The Ministry of Justice summoned top judges from the Supreme Court of Appeals and gave them briefings on whom they should vote for. The opposition Republican People’s Party (CHP) claimed that some members in the higher judiciary had even been given luxurious houses as a bribe for their vote.

At the polls, where a total of 13,994 judges and prosecutors went to the ballot boxes on Sunday, October 12, 2014, the pro-AKP faction was victorious. Eight of the ten newly elected members of the HSYK backed the government, and only two seats went to “independents,” or candidates believed to be affiliated with the Gülen movement.

Additionally, under the new HSYK law, the president has the power to appoint four primary HSYK members from among academics and lawyers, presenting Erdo?an with yet another opportunity to stack the board. On October 26, Erdo?an appointed four members, three of whom have direct relations with the AKP. With the announcement of these four members, the names of all 22 HSYK members have been finalized, with their term expiring in four years. Within the HSYK, a minimum of 12 votes is required to pass a decision.  AKP-affiliated members hold 15 seats on the final board, forming a majority.

The new members officially began service on October 27. On October 28, the General Council of the HSYK convened to distribute roles to its new members. Unsurprisingly, YBP candidates were appointed as HSYK deputy chairman and the heads of HSYK’s three chambers.

What do these results mean?

Turkey’s judiciary is losing its independence. At issue is a seeming commitment of a majority of new HSYK members to issue rulings and decrees in support of the ruling party. Indeed, pro-government candidates ran on a platform promising to “work in harmony with the executive,” proclaiming their subservience to Erdo?an and the AKP. A CHP deputy explained, “[i]t shows that the rule of separation of power is being destroyed. Constitutionally there has to be a separation of power and the judicial system has to be impartial and apolitical.” As an opposition deputy stated, “[t]his HSYK is the AKP’s.”

Ahmet Gündel, a retired Supreme Court of Appeals prosecutor has voiced fear that the government may attempt to use the HSYK to punish judges and prosecutors who attempt to investigate government corruption or those who will not toe the government line. As he explained, “[t]he [members of the judiciary] will fear that they might, after a complaint against them, be reassigned to another post [in another town], be investigated or be expelled from the profession.”

Indeed, the new HSYK has already acted in the government’s favor, requiring an investigation into military commanders who ordered the stopping and searching of trucks belonging to Turkey’s National Intelligence Organization (MIT) en route to Syria in January 2014. The trucks were alleged to be carrying explosives and weapons to be supplied to the Syrian opposition. While the previous HSYK did not give permission to launch an investigation into the generals involved in the incident, the government’s more agreeable HSYK readily acquiesced.

On December 2, the Turkish parliament approved a controversial package of legislation expanding police powers and reforming the court system, by a margin of 211 to 17.

The law expands police powers of search and seizure by lowering the standard to conduct a police search from “strong suspicion based on concrete evidence” to “reasonable suspicion.” It expands the list of crimes for which courts can seize assets and property to include attempting to overthrow the constitutional order, which could easily be used against individuals and companies believed to be linked to the Gülen movement or other opposition parties.

The law also adds to the powers of the penal judges of peace, a system created after the wide-sweeping graft probes of December 2013 to handle cases linked to the “parallel structure,” a phrase known to refer to the Gülen movement. Penal judges of peace give rulings on detentions, arrests, seizures of property and search warrants during the investigative stage of such cases; the judges are also authorized to handle appeals on those rulings. Under the new law, these judges will now have the ability to authorize wiretaps for an expanded range of crimes, including crimes against state security and against the constitutional order.

The new law is also designed to address one of the AKP’s major weaknesses and the reasons it struck up an alliance with Gülenists in the first place: its lack of human capital. The Islamist circles from which the AKP emerged had long shunned the Turkish state, feeling oppressed and marginalized by it. The Gülen movement, on the other hand, not only promoted education but had worked to place its members among the government bureaucracy. Thus, elected AKP officials felt they could trust Gülenists within the state to carry out their program and block elements of the old, Kemalist order that might try to revolt. Now, finding itself at war with Gülenists, the AKP is finding that it must not only purge the bureaucracy of its former allies but also, if it is to retain control, bring in its own people. Despite having been in power for 12 years, the AKP often lacks sufficient cadres that meet the requirements?in terms of educational level and years of service?to fill some of the highest positions, especially within the judiciary. Thus, AKP is using its control over Parliament to legally lower these barriers, so that it can more easily staff the bureaucracy with its supporters.

To this end, two of Turkey’s top courts, the Supreme Court of Appeals and the Council of State, were restructured by the recent law, adding new judges and reducing the number of years of seniority required to be elected. Expanding the power of the now government-controlled HSYK, the Supreme Court of Appeals will no longer be able to veto judges appointed by HSYK. Additionally, the Ministry of Justice will appoint 4,000 new judges and prosecutors, flooding the profession with pro-government figures.

“These amendments contain by their nature, the possibility of inflicting serious damage to the Court, the judicial culture, the independence of the judiciary and the nature of the appeal assessments,” said Ali Alkan, chief judge of the Supreme Court of Appeals. Additionally, a CHP Deputy Chairman said that, “[w]ith the ‘reasonable doubt’ regulation introduced by this law, anyone who is an AK Party opponent has been declared a potential criminal.”

Just One More Election: Hurdles to Consolidating a Presidential System in Turkey

Davutoğlu and the “New Turkey”: The Closing of a “Hundred Year Old Parenthesis”