For the second year in row, employers are expected to file enough H-1B visa petitions to reach the annual limit within days after the filing window opens. U.S. Citizenship and Immigration Services (USCIS) opened the filing period for FY 2015 visas today and has already announced that it anticipates receiving more than enough petitions to reach the cap by April 7. For approved petitions, visas will be available on October 1, 2014, the beginning of the fiscal year. Each year’s application period usually opens on April 1st?six months prior to the beginning of the fiscal year. Typically, the earliest an employer may petition for an H-1B visa is six months prior to the “need” for a foreign worker. However, because caps are met quickly each year, employers rush to apply by April regardless of actual need.

The H-1B Specialty Occupations visa is one of several temporary categories that authorize “non-immigrants” (i.e., those who are not granted permanent residence or a green card) to work in the United States. The program was created in 1990 and allows U.S. employers to temporarily employ foreign skilled workers in “specialty occupations” that require expertise in specialized fields and a bachelor’s degree or higher.1 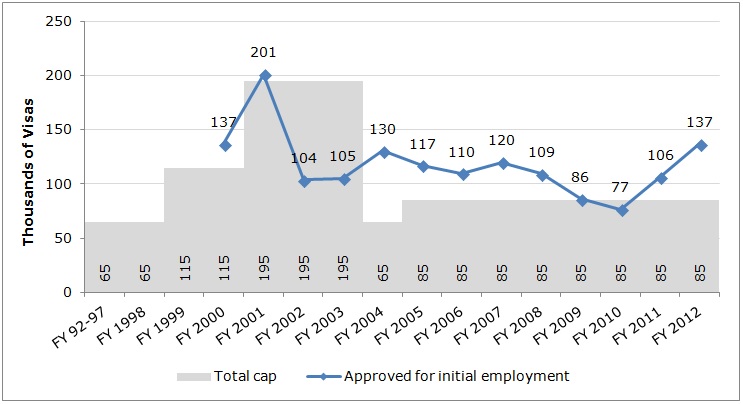 Demand for H-1B visas has exceeded the annual cap every year since 2004. Last year, USCIS announced that it had received a sufficient number of H-1B petitions to reach the cap for FY 2014 on April 5?five days after it began accepting petitions. This is not a new phenomenon. Although the pace at which employers filed petitions decreased during the recession, the H-1B cap was hit within two days for the FY 2008 filing year and within five days for FY 2009. It was reached within one month for the FY 2007 filing year. (See Table 1.)

When the FY 2008 cap was reached within two days in 2007, USCIS established a lottery selection process that randomly determined which H-1B petitions would be processed, since it was impossible to establish the order in which petitions were filed. The same process was used during last year’s five-day H-1B season when the number of H-1B petitions for FY 2014 reached 124,000. USCIS announced last week that it expects to use the lottery system once again this year to meet the numerical limit for FY 2015. While the process of randomly selecting petitions is understandable from the administrative perspective of USCIS, the process essentially determines the “winners and losers” of the H-1B visa year without regard to merit.

The House and Senate each recently proposed reforms to the H-1B visa program. The Senate-passed Border Security, Economic Opportunity, and Immigration Modernization Act of 2013 (S.744) would increase the base cap from 65,000 to a flexible cap of 115,000-180,000 based on economic circumstances and would increase the exemption for advanced degree holders from 20,000 to 25,000. The bill would also increase prevailing wage requirements for H-1B visa holders (from 95 percent of the prevailing wage to 100 percent) and mandate that employers advertise job openings to American workers for at least thirty days prior to hiring an H-1B worker. The House Judiciary Committee also approved a bill last year with H-1B reform proposals. H.R. 2131, the Supplying Knowledge-based Immigrants and Lifting Levels of STEM Visa Act (or SKILLS Visa Act) would more than double the base cap from 65,000 to 155,000 visas. The bill would also increase the exemption for advanced degree holders from 20,000 to 40,000 visas per year.

As the immigration reform debate continues through the spring and the House considers if and when it will address the issue, this latest announcement from USCIS will surely renew calls to more closely align the H-1B visa cap with employer demand.

2 Although the H-1B visa allows a temporary stay, the law allows H-1B visa holders to be sponsored for permanent residence while in the United States in H-1B status. This is called “dual intent,” i.e., the individual holds both the intent to abide by the temporary nature of the H-1B status while in that status, and to immigrate when an immigrant petition is approved and an immigrant visa is available.

3 Once the initial 20,000 visas set aside for advanced degrees are used up, additional advanced-degree applicants count against the regular 65,000 cap.

4 Nonprofit organizations, government research organizations and institutions of higher education are exempt from these limits, and USCIS continues to accept petitions from cap-exempt employers after the cap has been reached. Thus, the actual number of approved H-1B visas in a given year typically exceeds the annual cap of 85,000. Petitions for continuing employment of previously-approved foreign nationals are also exempt from the cap. These include requests for extensions of stay, amended petitions, transfers to new employers or concurrent employment in a second H-1B position.