Social Security claimants are not consistently provided with the necessary information to make well-informed decisions about their benefits. That is the conclusion of a new report from the Government Accountability Office (GAO) prepared for the Senate Special Committee on Aging. The committee held a hearing on Wednesday afternoon to review the findings of the report, just one week after holding another hearing on the recommendations of the Bipartisan Policy Center’s Commission on Retirement Security and Personal Savings. The topic of Social Security claiming trends was also discussed during that hearing.

Fewer than one in four Social Security claimants wait until the full retirement age (currently 66) to claim benefits.

In the study, GAO observed 30 in-person claims at Social Security Administration (SSA) field offices to see if employees were following the standard protocols of SSA, as outlined in its Program Operations Manual System, or POMS. POMS directs SSA field officers to provide prospective claimants with complete information, such as the advantages and disadvantages of claiming benefits at a particular age. This is particularly important for claimants under age 70, for whom waiting to claim would result in a higher monthly benefit for life.

According to Aging Committee Ranking Member Sen. Claire McCaskill (D-MO), GAO’s observations were originally supposed to be done in two parts. First, GAO investigators (identified as such) would join and observe SSA employees’ discussions with Social Security claimants. Then, GAO investigators would be sent “under cover” as claimants so that they could observe what potential claimants were being told by SSA employees when a third party was not watching. That second part of the investigation, however, was quickly deemed unnecessary.

“What these investigators heard in their official visits was so disturbing and so disheartening that there was no need for GAO investigators to go undercover as secret shoppers. Multiple people were told they could claim their benefits retroactively and get a big check today without the incredibly important warning that this would reduce their benefits for life. Others were given outdated information like breakeven analyses that we know pushes people to claim benefits earlier,” McCaskill said in her opening remarks. “The idea that so many mixed and inconsistent messages occurred in just 30 interviews is startling.”

BPC’s commission recently concluded that a higher guaranteed monthly income from waiting to claim Social Security is a strategy that would improve retirement security for many Americans. Indeed, by forgoing benefits for just one year, an individual’s monthly benefit can be increased by up to 8 percent for the rest of their life, making delayed claiming of Social Security one of the best annuities money can buy. Because of the substantial impact that the age of claiming has on the financial security of many older Americans, the poor information provided by SSA is shocking and deeply concerning.

Unfortunately, fewer than one in four Social Security claimants wait until the full retirement age (currently 66) to claim benefits. While there are certainly some older Americans for whom such early claiming makes sense (such as those who can no longer work or are in poor health), many claim benefits early simply because they are misinformed about the impact of doing so. A 2015 AARP study found that two out of three future beneficiaries significantly underestimate the impact that delaying claiming past age 62 would have on their benefits, while fewer than a third know that waiting until age 70 to claim Social Security would maximize their monthly benefit, perhaps explaining why less than 3 percent choose to do so. 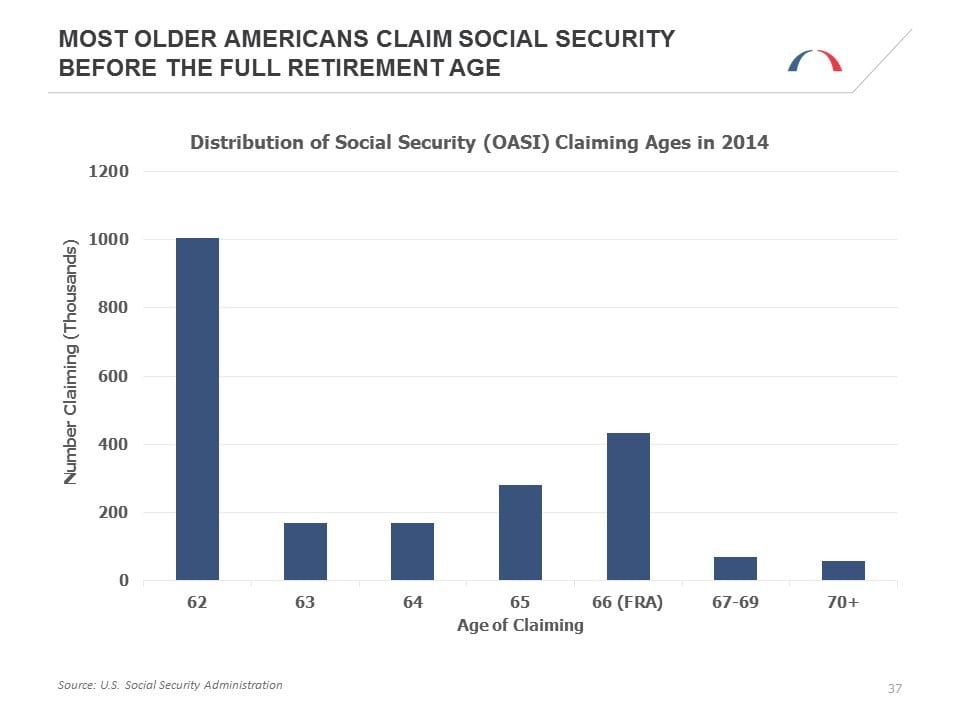 BPC’s commission recommended a number of changes to SSA’s communications in order to make these tradeoffs clearer for individuals who are deciding when to claim benefits. One proposal would rename Social Security’s “early eligibility age” to the “reduced benefits age” to make the implications of early claiming clearer and make it sound less attractive for prospective claimants. The commission also recommended better counseling for individuals at the moment they are deciding whether to claim benefits, a recommendation which is echoed in GAO’s latest report.

“It’s critical that those who are approaching their retirement years have the information they need to decide when to begin claiming their benefits and what will work best for both them and their families,” said Committee Chairman Sen. Susan Collins (R-ME) in her opening remarks at the hearing. BPC’s commission agrees, and hopefully this week’s activities will shed some much-needed light on this important issue. With some relatively easy changes, SSA could significantly improve retirement security for Americans from all walks of life.

One Social Security Reform that Democrats and Republicans Agree On