The Senate is considering new legislation that seeks to change an obscure interest rate paid by the Federal Reserve to its member banks as part of broader legislation to pay for transportation investment. The interest rate determines dividends private banks receive, risk-free, on funds they are required to invest as a condition of becoming a member of the Federal Reserve System. This rate was originally set at 6 percent when the Federal Reserve was created and has never been changed. The proposal would cut this rate to 1.5 percent and has now advanced to the Senate floor with no debate or discussion before the Senate Banking Committee. Tinkering with the Federal Reserve’s system to fund current congressional spending initiatives, without public debate or thought on its ramifications, sets a dangerous precedent and is bad policy.

Over the 102 years this interest rate has been in place, the amount banks received from it has varied widely from what banks would have received had they invested in an alternative risk-free asset, such as U.S. Treasuries. BPC analysis in the chart below shows the difference in what banks received in return for holding Federal Reserve shares versus the interest rate on U.S. Treasury 10-year notes. From the introduction of the dividend in 1913 to present, the average return on 10-year U.S. Treasuries was approximately 5 percent, just slightly under the 6 percent rate paid by the Federal Reserve. Thus, over history, the original framers of the Federal Reserve System picked an interest rate for Federal Reserve Bank capital that would turn out to be remarkably close to actual experience over the next century.

That said, the overall average covers three distinct time periods. Between enactment and 1969 prevailing interest rates were lower than what was being paid out by the Federal Reserve. However, almost every year between 1970 and 1997 banks were worse-off holding capital in the Fed compared to buying Treasury notes. Since 2001, prevailing interest rates have once again been lower. Overall, banks received a lower return with Fed shares one-fourth of the time and a higher return three-fourths of the time than they otherwise would have with Treasury notes. It is worth noting that the reason the overall average difference between the fixed interest rate of 6 percent and the observed interest rates on Treasury notes of 5 percent is small, but the rate was lower for a longer duration is because when this was a ?good’ deal for banks it was a much smaller ?good deal’ than during the time period when it was a ?bad deal’ during which it was a much ?worse deal’. 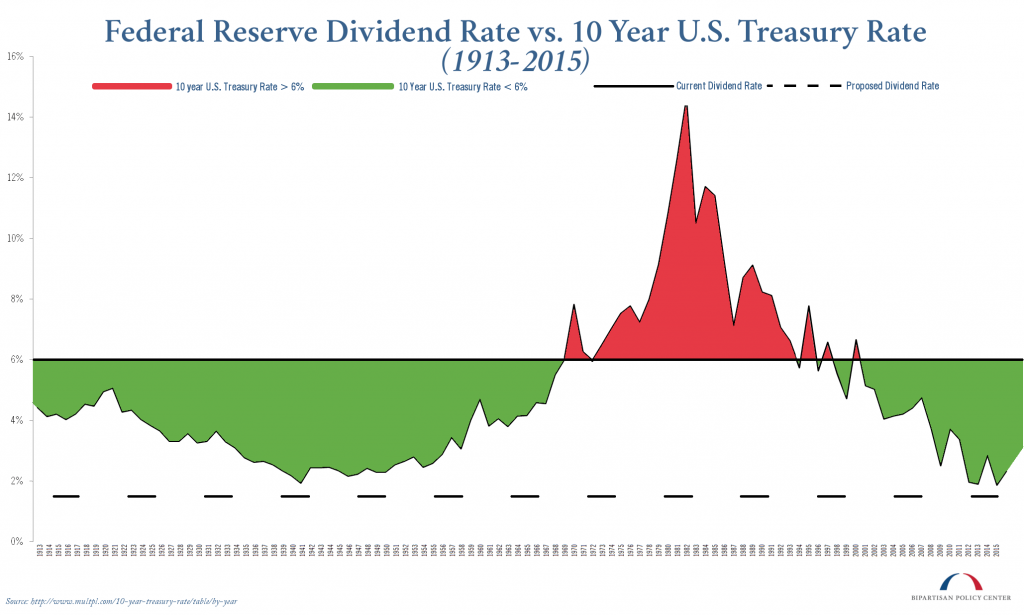 There is a reason that Congress has never before changed this rate to fund current spending.2 The famed Glass-Steagall Act, expressly reaffirmed the 6 percent interest rate. Any direct reinstatement of Glass-Steagall would mean a return to 6 percent, which would then score as costing the taxpayer money. On the other side of the political ledger, do those that are concerned about Federal Reserve accountability and want to ?Audit the Fed’, want to give the Federal Reserve billions of dollars of additional income with no additional oversight? Finally, for those in the middle, consider the political precedent that this sets as to Congress’s ability to change the rules that govern the Federal Reserve, including the conduct of monetary policy, as a way to create short-term ?savings’ to use as offsets to fund anything. Simply put, it is bad public policy to abruptly change a key interest rate with no public debate, especially as part of a mission to search the couch cushions for more money to fund the topic du jour.

1 The President’s FY 2014 Budget has Federal Reserve remittances going to zero or negative in 2018. More current budgets have the number shrinking but remaining positive. For a more in depth discussion of why this is, check out Carpenter (2013).

Dodd-Frank at Five: Looking Back and Looking Ahead

UK Regulator’s Transparency Should Be a Model for U.S. FSOC