Turn to page 8 of the Obama Administration’s Fiscal Year 2014 budget request (released earlier this week), and you will see a section dedicated to of one of his priorities: “Investing in American Innovation.” The president’s proposed budget aims to increase federal research and development (R&D) by 9 percent above 2012 levels. Energy, in particular, is given significant attention.

The administration’s emphasis on energy innovation is not wholly new ? but it is important and it echoes a similar emphasis on innovation in Senator Murkowski’s energy blueprint released earlier this year. In fact, since the election, a flurry of energy policy reports have been released, representing a range of perspectives. Despite this diversity of viewpoints, a common theme emerges in each of them?energy innovation is critical to the nation’s future and global economic competitiveness. Still, the nation’s current economic and fiscal climate has had a dampening effect on both private and public sector investment in innovation. This investment shortfall is illustrated sharply in comparisons of U.S. energy research and development as a share of gross domestic product to other nations (see Figure 1). 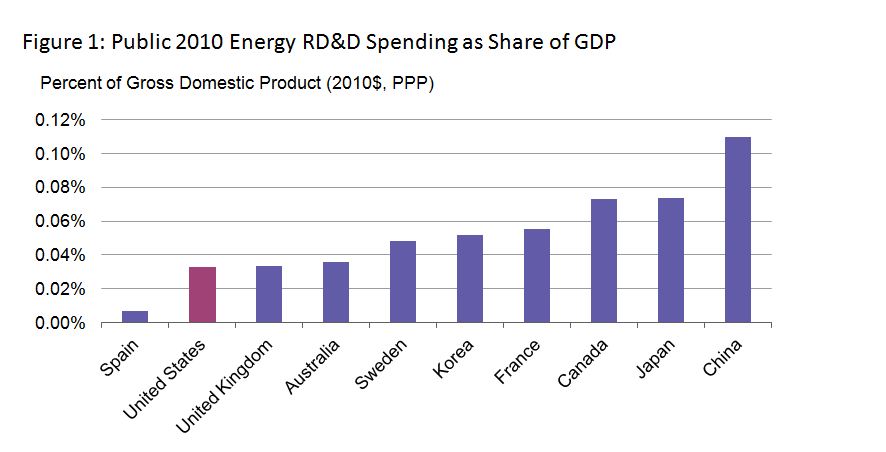 The BPC Energy Project’s Strategic Energy Policy Initiative (a diverse group of 20 stakeholders) released a report in February naming innovation as a key strategic priority for U.S. energy policy and recommending a number of discrete policies to spur energy innovation. The BPC report argues that “innovation occurs through complex and dynamic processes, and technological development often does not follow a linear path from research to commercialization.” Consequently, our recommendations emphasize the innovation ecosystem, and aim to foster an environment conducive to energy innovation by ensuring that federal interventions target specific market inefficiencies?from basic research through deployment.

Our report emphasizes that federal investments in energy research and development must be significantly increased, a view that has been reflected in recent reports by many other diverse groups (e.g., AEIC; PCAST; AEI-Brookings-Breakthrough; Murkowski; and Harvard.) Additionally, the BPC report recommends a review of the Department of Energy’s (DOE) technology programs to rebalance its energy research and development portfolio, to guide budget priorities, and to align energy innovation activities beyond DOE with broader national energy goals (including, for example, the Department of Defense). These recommendations go beyond applauding current energy innovation efforts and actually propose multiple reforms, including reforming elements of DOE’s institutional architecture to prioritize energy innovation, and undertaking reforms to the loan guarantee program.

Finally, the BPC report acknowledges the role of the tax code in spurring private sector investment in energy technology; the report not only recommends assessing the effectiveness of doing so through the tax code but also considering mechanisms to leverage public-sector resources to demonstrate and deploy energy technologies.

While vigorous ? and often bipartisan ? support for basic and applied federal investment in energy R&D has persisted for decades, energy R&D budgets have remained a small fraction of total federal R&D spending. Even in these challenging economic and fiscal times, we must prioritize investments in our energy future. The BPC report outlines a strategy to nurture innovation in the energy sector and recommends bolstering our nation’s investment in energy innovation and ensuring that those investments are efficient and accountable.