“’The debt is yesterday’s problem.’” That’s the new cry in Washington, D.C., and, apparently, on Wall Street. Lulled by new forecasts that show deficits declining for the next three years, policy- and market-makers have moved on to the next challenges?guessing what the Federal Reserve will do (or perhaps who the Federal Reserve Chair will be) and how Congress will fund the government next year.

Thus, CNBC conducted a poll of Wall Street participants that revealed that concern about debt and deficits had declined among those polled from 80 percent in January to less than 50 percent now.

This dramatic change of view mirrors the new call for “growth” above all else in Washington.

Here are the facts:

These three facts were trumpeted by both the Legislative and Executive Branches as evidence of real progress.

As we have noted before, the rest of CBO’s analysis seems to have been lost in the rush to declare victory over deficits.

Below the fold, CBO repeated its warning that “with such deficits, federal debt held by the public is projected to remain above 70 percent of GDP?far higher than the 39 percent average seen over the past four decades. (As recently as the end of 2007, federal debt equaled 36 percent of GDP.)”

A picture is worth a thousand words, so here is the future in three pie charts: 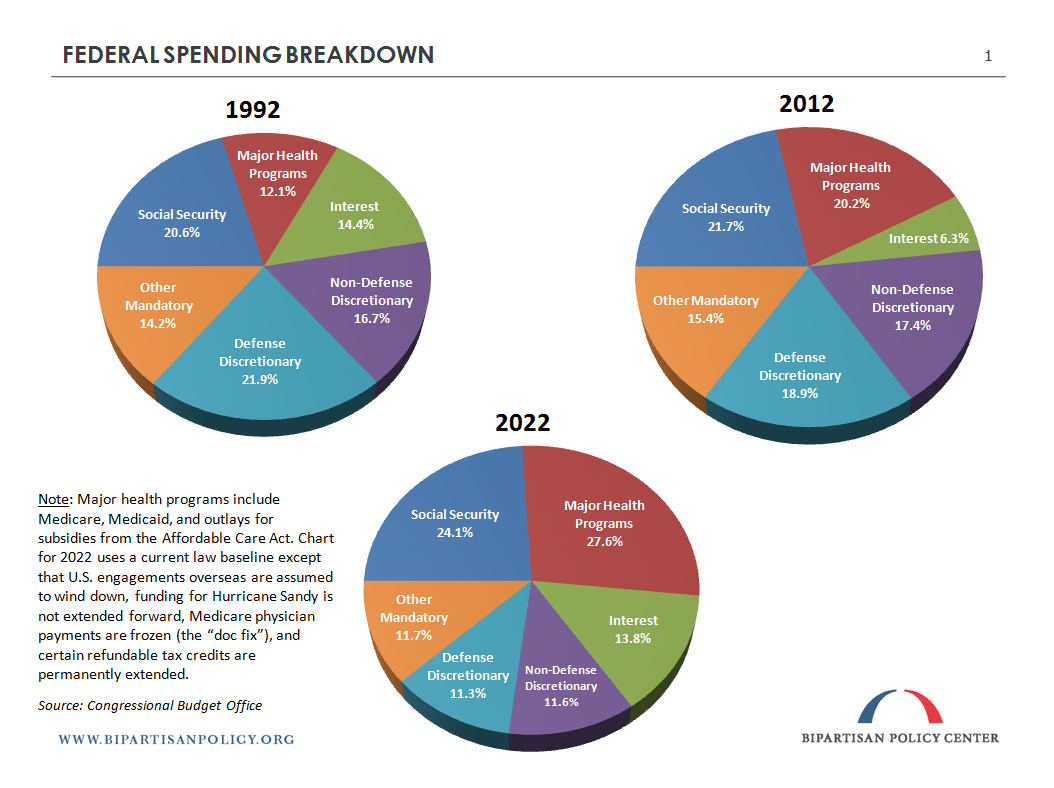 Click here for a larger version of this image.

Comparing the three charts shows the stark realities of the federal budget. Under current law, interest spending will exceed defense spending by 2022. Interest costs will also exceed all non-defense discretionary spending in that year.

Here’s one way to look at the national situation as if it were a business and you were considering buying part of that business.

That is an incomplete, crude, business-like analysis of the United States budget and fiscal situation.

It is not all that dissimilar to real businesses that during the past ten years have shown similar characteristics?and which the American taxpayer had to bail out to avoid an economic meltdown.

A simple question emerges: Would you invest in a business whose balance sheet looks like that?

Well, you might if you were assured that the CEO and directors of the firm would begin to quickly reduce costs by selling non-essential assets and closing redundant production lines.

Yet, the CEO and Board have made similar promises for the past 30 years and, except for one four-year span about 20 years ago, have failed to undertake those reforms.

The United States has the “exorbitant privilege” of having the world’s reserve currency?and its own printing press with which to print more of that currency.

So, the CEO and the Board keep their collective heads in the sand and hope that future CEOs and Board members will somehow avoid the obvious catastrophe ahead. Let the shareholder beware.