Remember in “Willy Wonka and the Chocolate Factory” when they walk down the ever-shrinking hallway? Discretionary spending ? the federal government’s annually-appropriated funds for defense and domestic programs ? appears set to join those lucky golden ticket-finding kids. Specifically, a recent New York Times article stated that many in Congress have proposed cutting State Department foreign aid funding for fiscal year 2012 (which began this week) by $2 billion in the context of deficit reduction.

This would be on top of a $5 billion cut that was enacted last year for fiscal year 2011.  Leaving aside the merits of foreign aid, two important facts shed light on the context:

Analyzing these cuts to foreign aid from a budgetary perspective may seem like small beans, but the two points above are equally applicable to the larger pot of domestic and defense discretionary spending. As we have discussed in previous posts, discretionary spending is much less than half of the federal budget and those expenditures already are projected to decline significantly relative to the economy. Thus, the treatment of foreign aid epitomizes what is taking place in the federal budget as a whole.

Up to this point, Congress has directed its deficit reduction efforts toward the path of least political resistance ? chopping away at the broad category of discretionary spending that allows them to avoid detailing any specific cuts ? rather than tackling the areas of the budget that are fundamental to improving our situation.  Fast-rising health and a shortage of revenues, not discretionary spending, are the primary drivers of our debt.

Bill Hoagland, former Republican staff director of the Senate Budget Committee and member of BPC Domenici-Rivlin Task Force, believes that by ignoring this fact, “we are sacrificing the investment areas of our federal budget, the seed corn for future economic growth, on the altar of current consumption.” The chart below shows that in recent decades the U.S. already has dramatically reduced the investment portion of our budget. The recently-passed Budget Control Act further cut these priorities, and we likely have reached ? if we have not yet crossed ? the verge of eroding future growth. 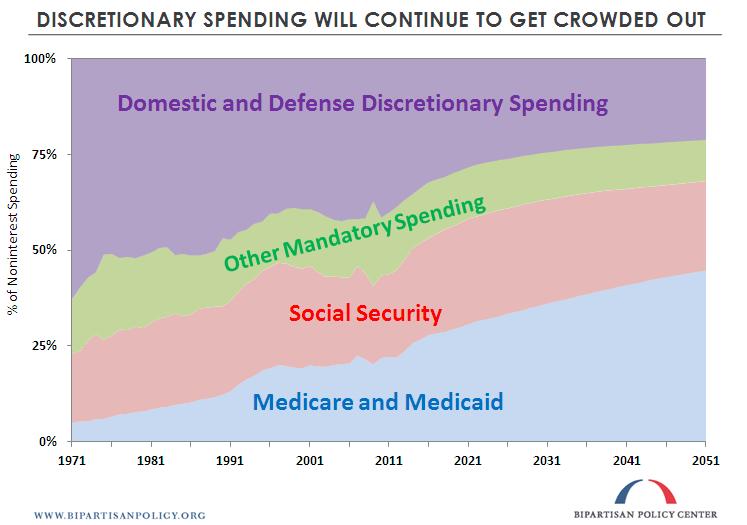 The composition of the looming sequester ? should the Joint Select Committee on Deficit Reduction (JSC) fail ? is the indisputable evidence. Instead of addressing health care or revenues, it would cut domestic and defense discretionary spending to the bone, bringing it down to unprecedented levels, threatening our security and strangling our ability to remain competitive in a global economy.

As the JSC’s November 23 deadline approaches, the members face a fork in the road: They can continue to slash relatively small and shrinking parts of federal spending to avoid the tougher tasks at hand, or they can set up serious entitlement and tax reform to put our budget back on a sustainable track. The choice is stark, yet clear.