Absent an increase in the debt ceiling, there will come a day when Treasury exhausts its borrowing authority and runs out of cash on hand to pay the nation’s bills. Starting on that day ? which the Bipartisan Policy Center (BPC) refers to as the X Date ? daily revenues will be the only means by which Treasury can cover the payments that come due. Since the federal government is running a large deficit, these cash flows will be insufficient to meet all obligations.

BPC’s projected range for when the X Date will occur was echoed on Monday by the Treasury Department in a letter to Congress, which forecast that extraordinary measures would be exhausted at some point between mid-February and early March. The cash flows over the past week (since BPC’s original estimate was released) have been largely as anticipated, with no large fluctuations. We also reviewed the Internal Revenue Service announcement of the delay in the start date of the tax filing season to January 30, but did not find it would necessarily have a significant impact on total tax refunds paid in February. Thus, at this point, BPC’s projected window for the X Date remains unchanged. BPC will continue to regularly update its projection as the X Date draws closer. 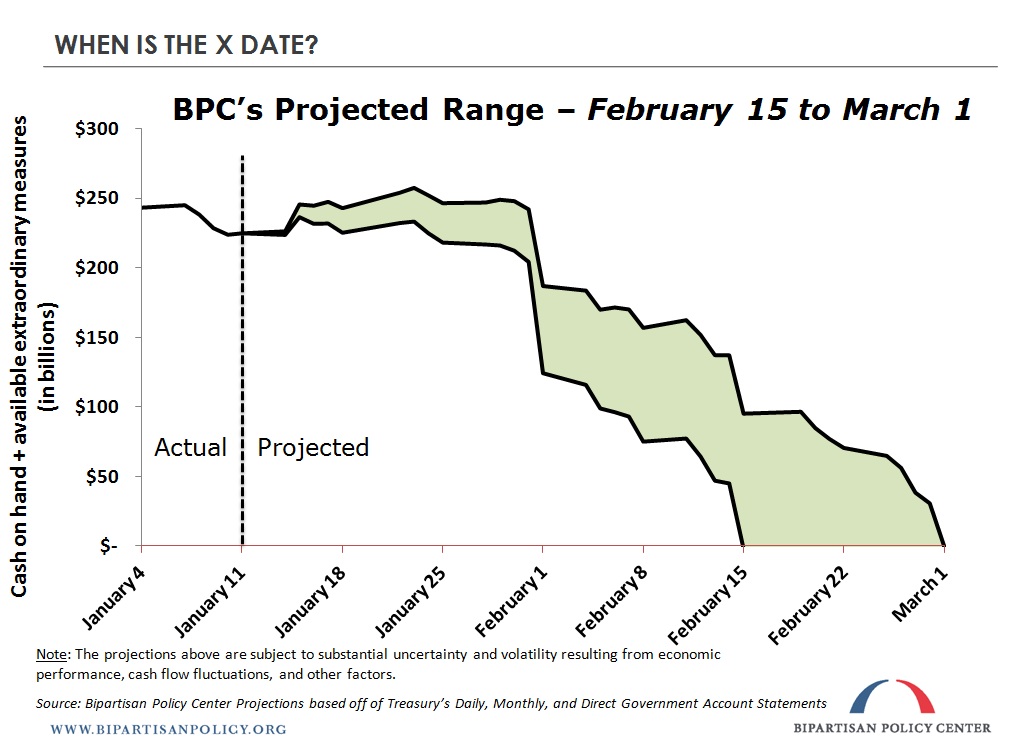 What Actions Might Treasury Take in a Post-X Date Situation?

Once the X Date is reached, the president and Treasury officials will find themselves in largely uncharted waters and be forced to choose a path forward. BPC’s debt limit analysis laid out two potential scenarios that could follow:

The Treasury Department’s Office of Inspector General (OIG) released a report last year in response to Members of Congress who inquired about Treasury’s planning during the debt limit event of 2011. Among the OIG’s findings was that some Treasury officials determined prioritization to be an unlikely course of action due to the concerns discussed above, and that delay of payments was the most likely outcome because the officials considered it to be feasible and the least harmful among a variety of bad options. Treasury officials realized that delays would cascade dramatically within a short amount of time due to the nation’s large deficit, resulting in significant consequences for individuals and organizations expecting government payments and a slowdown in the broader economy.

BPC has estimated the consequences of this payment delay scenario under a set of assumptions, including (for illustrative purposes): that the X Date occurs at the beginning of the BPC estimated window (February 15); that Treasury enters the X Date with precisely enough cash on hand to make that day’s $30 billion interest payment on the debt; that all interest payments are prioritized and paid on time; and that federal trust fund operations continue as normal. In this situation, the $22 billion of non-interest payments owed on February 15, which include military pay and unemployment benefits, would be delayed until February 20. Similarly, over $30 billion of payments due on February 20, which include Social Security benefits, would not be made until February 25. Delays would continue to grow ? payments due February 22 would be made a week late on March 1. And payments due on March 1, which again include Social Security benefits, as well as payments for all Medicare Advantage and Part D prescription drug benefit plans, military salaries, and veterans’ benefits, would be delayed until March 15, half a month late. 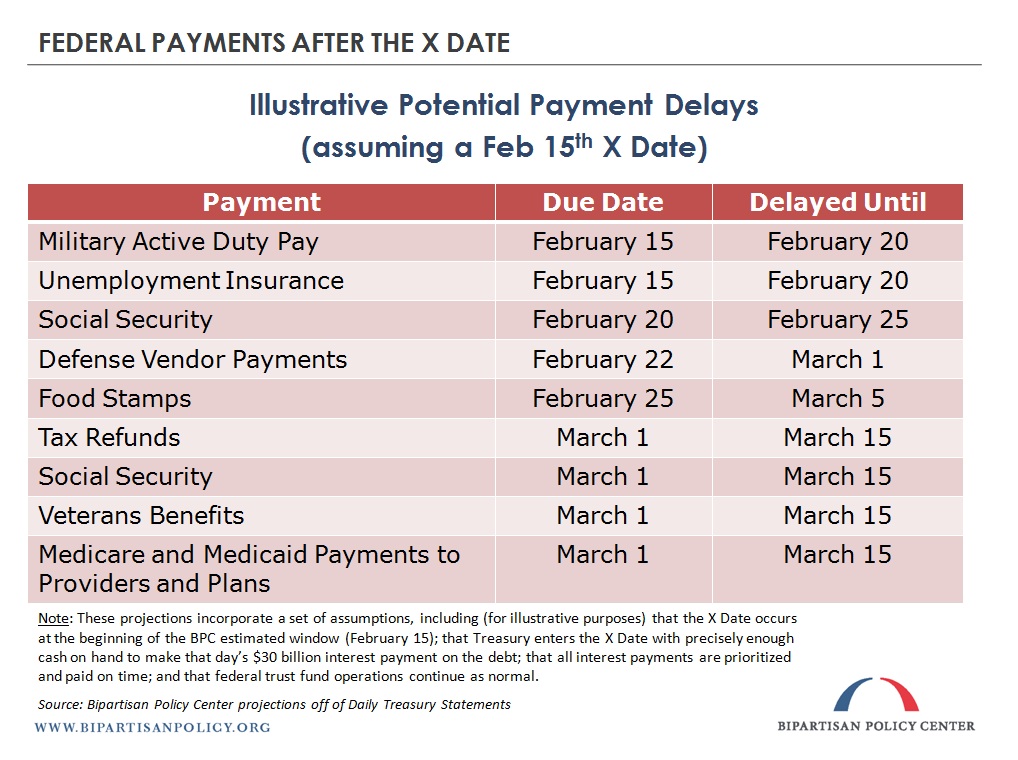 These payment delays would have a real impact on individuals and businesses across the country. Consider a point at which payments are delayed for multiple weeks. Both the first- and second-order effects of such a delay would be very tangible: a senior who depends on Social Security benefits and has no other source of income might be unable to pay rent when due; a physician who treats many Medicare and Medicaid patients may be unable to meet payroll for nurses and administrative staff; a small government contractor may be unable to pay a subcontractor on time; a family depending on its tax refund to make a credit card payment might incur a substantial interest expense; and a member of the military whose paycheck is delayed might miss a mortgage payment, incurring penalties. These and many other similar circumstances would all be possibilities under a delayed-payment scenario.

Under normal conditions, Treasury issues new debt to the public in order to raise cash to pay off outstanding securities as they mature. Many buyers of U.S. government debt routinely roll over their debt at maturity, and Treasury has never been unable to find sufficient purchasers for its auctions. In a situation where Treasury has begun to default on its obligations (i.e., after the X Date), however, there is a possibility that such auctions would not go as smoothly. Investors might demand a significant premium on their debt purchases, or in a worst-case scenario, Treasury could find itself with insufficient buyers for an auction. Were this to occur, it would force Treasury to step in with enough cash to pay off the redeeming bondholders or face a default on the U.S. debt. The OIG’s report found that this was a serious concern among Treasury officials during the summer of 2011, as there was a large auction scheduled to take place in early August of that year. BPC has researched the upcoming bond rollovers and finds that there will likely be over $500 billion of debt that will need to be rolled over from February 15 through March 15, 2013. (Very short-term securities that would be due in that period have yet to be issued; therefore, we cannot determine exact total quantities at this point.) 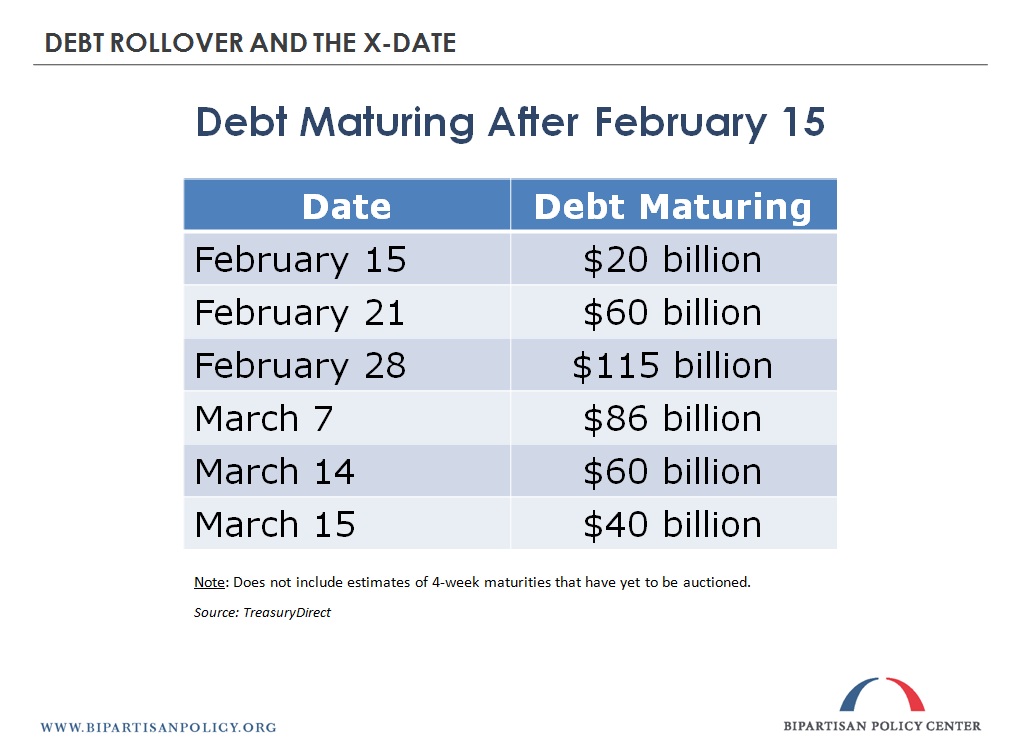 With no legal authorisation for net debt issuance, the Treasury would be forced to immediately eliminate the deficit – a fiscal contraction twice as great as the recently avoided ‘fiscal cliff’ – by delaying payments on commitments as they fall due. It is not assured that the Treasury would or legally could prioritise debt service over its myriad of other obligations, including social security payments, tax rebates and payments to contractors and employees. Arrears on such obligations would not constitute a default event from a sovereign rating perspective but very likely prompt a downgrade even as debt obligations continued to be met.

In other words, if the U.S. goes past the X Date without an increase in the debt limit, prepare for a likely downgrade.

As an important caveat to both the Treasury Department’s and BPC’s X-Date projections, the IG’s report found that when projecting cash balances for August 2011, Treasury’s forecast model had a 98-percent confidence interval at plus or minus $18 billion looking one week ahead and plus or minus $30 billion two weeks out. Based on BPC’s analysis of typical daily cash flow needs, this variability could impact the X Date by several days in either direction.

606
14415
608
Once the X Date is reached, White House and Treasury officials will find themselves in largely uncharted waters