Congress’ vote last week to extend expanded unemployment insurance benefits, the payroll tax holiday, and the Medicare “doc fix” will bring the date upon which the U.S. reaches its debt ceiling closer to ? and likely into ? calendar year 2012. The official scoring of that bill by the Congressional Budget Office (CBO) shows that Congress’ action added $101 billion to the projected deficit for fiscal year (FY) 2012 and additional tens of billions of dollars for the first three months of FY 2013.

We have taken this occasion to use the same methodology that BPC employed last summer when projecting to the week the Treasury Department’s expiration of cash on hand. There was a significant amount of economic and policy uncertainty when we made our projections then, and there likely is even more now, since arrival at the debt ceiling is much further in the future. But, at this point, we believe that a forecast can be made with reasonable confidence.

We have carefully analyzed projected monthly deficits, intergovernmental borrowing, and various other accounts to estimate the accumulation of debt subject to limit over the coming months. We incorporated the additional deficit spending produced by the bill mentioned above, as well as the recent revelation by CBO that corporate tax revenues have come in well below expectations (as explained in our previous post). As such, our projected time frame for reaching the $16.394 trillion debt ceiling under current economic and policy assumptions has moved forward to somewhere between late November 2012 and early January 2013. This is consistent with Secretary Geithner’s current expectation that the debt ceiling will be reached “significantly after the end of the fiscal year, but before the end of the calendar year.” 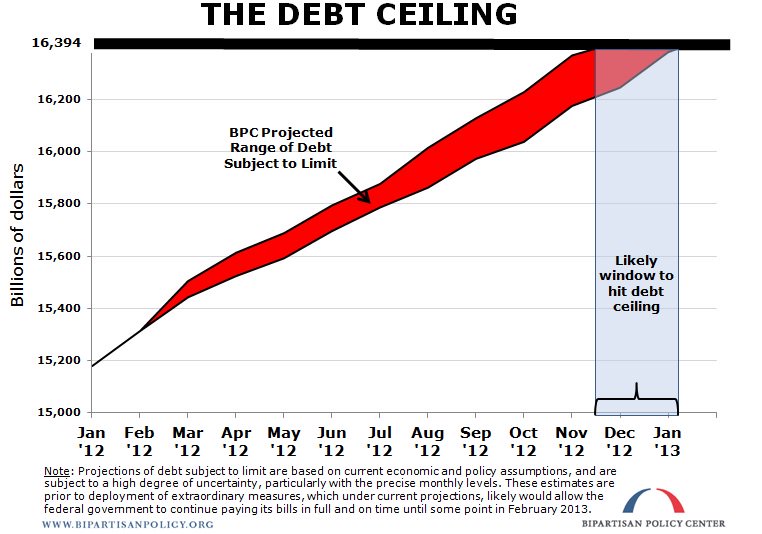 It is important to remember that reaching the debt ceiling does not mean that Congress must immediately act to legislate additional borrowing capacity. It means that Treasury will have to rely on “extraordinary measures” at that point in order to continue paying its bills in full and on time. Last year, Treasury began extraordinary measures in May, and they would have run out within the first ten days of August if Congress had not acted and passed the Budget Control Act of 2011. Under current assumptions, BPC now projects that extraordinary measures to remain within the current debt limit likely would lapse in February 2013.

Again, substantial uncertainty still exists in estimating when policymakers will have to increase the debt limit. Among others, continued instability in financial markets and economies in Europe; increased tensions in the Middle East and Asia; substantial jumps in gasoline and related product prices in the U.S.; any significant slowing of the U.S. economy; and the precise magnitude of extraordinary measures all could affect ? in one direction or the other ? the time at which the debt ceiling is confronted.

When the Budget Control Act of 2011 increased the debt ceiling last August, Congress, the Administration, and outside analysts believed that this increase would allow federal borrowing under the limit well into 2013. Due to unexpected circumstances that we have mentioned above and in previous posts, that belief appears increasingly likely to have been misguided.