Traditionally, as Congress wraps up its term, the Senate rushes to confirm White House nominees for influential federal positions. This year, however, there will be no last-minute votes for high-level jobs at the major independent financial regulatory agencies.1 Why? None are pending.

Over the last year, the Senate confirmed all 11 nominations it received from the president for top financial regulatory posts, eliminating what had been a long-standing backlog. As a result, the Senate’s docket to fill these vacancies is itself vacant, and for the longest time since President Obama took office. Indeed, there has been no independent financial regulatory nominee pending before the Senate in the last 181 days.2

This development reflects the impact of the so-called “nuclear option,” the parliamentary action taken a year ago by Majority Leader Harry Reid (D-NV) to enable almost all federal judicial and executive-appointment nominees advance to confirmation by a simple majority vote, rather than the previous 60-vote super majority standard to overcome a filibuster. The following chart shows the nomination votes since the rules change last November, according to an analysis of data provided by the Bipartisan Policy Center’s Nominations Tracker. 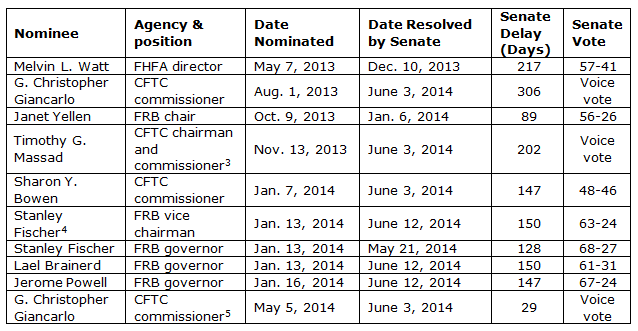 Three additional nominees were confirmed by the Senate, even though they each received fewer than the 60 votes required to overcome a filibuster in order to be approved under the old rules. The rule change appears to have been necessary to confirm two of the three nominees; now-Federal Housing Finance Agency Director Mel Watt and now-CFTC Commissioner Sharon Bowen were confirmed with 57 and 48 votes, respectively. (The FHFA had been operating without a permanent director for 1563 days, including 217 days since Mr. Watt’s nomination was announced.) In the third case, now-Federal Reserve Board Chair Janet Yellen, received 56 votes, with 18 Senators abstaining. Previously, Ms. Yellen had been confirmed as the FRB’s vice chair and governor with broad bipartisan support, and received some Republican support in the Senate Banking Committee for her nomination as chair.

Although more nominees have been confirmed, the length of the process remains protracted. The average nominee waited 161 days, or just over five months, before lawmakers voted on whether or not to approve them. That is essentially unchanged since a 2013 Bipartisan Policy Center analysis of the nominations process, before the Senate changed its rules.

Even though the Senate has confirmed more nominees, several top regulatory jobs will remain unfilled until the White House formally appoints a nominee. Three vacancies exist on the Federal Reserve Board: two for governors and one for the vice chairman for supervision, a position that has remained vacant since it was established in July 2010?1603 days ago?by the Dodd-Frank Act. Nor has anyone been named to fill the vacancy created by the departure of Scott O’Malia at the CFTC, who gave up his seat on the commission 124 days ago.

Justin Schardin, associate director of the Financial Regulatory Reform Initiative, frequently provides comments and analysis on financial policy developments, including the BPC’s Nominations Tracker. He can be reached at [email protected]

2 The only other time this happened during the Obama administration was a brief three-month window in early 2010, when the Democrats controlled 59 Senate seats.

3 The CFTC’s chairmanship is a separately-confirmable position from its five commissioners, one of whom holds the chairmanship. Because of this, Massad was nominated to fill both positions.

5 Giancarlo was nominated for a second term.

Analysis of the Nominations Process for Financial Regulators