Today, the Congressional Progressive Caucus (CPC) released its vision for fiscal policy over the next ten years. This plan is the latest in a string of budget proposals for fiscal year (FY) 2013, and on this blog, we will continue to produce objective analyses as additional plans are put forward.

The CPC budget is entitled the Budget for All, and represents the ideas of a progressive Democratic coalition in the House of Representatives.

The release follows President Obama’s budget submission and House Budget Committee Chairman Paul Ryan’s The Path to Prosperity, which has passed through his committee.

All three plans would stabilize the debt over the ten-year budget window (albeit at different levels), but they offer starkly different visions for federal taxing and spending policy. There are substantial ideological divides among the plans over the proper role for the federal government in society.

Although the CPC budget includes some spending cuts ? primarily in the area of defense ? they would be more than offset by additional deficit spending (i.e., tax cuts and spending increases that are intended to strengthen the sluggish economic recovery and repair the national infrastructure). Thus, nearly all of the deficit reduction in the CPC plan can be considered to stem from a heavy dose of additional revenues, the vast majority of which would be collected from high-income taxpayers and corporations.

As detailed in our explanation of Ryan’s budget, that plan takes the opposite approach. There is no deficit spending proposed for the near term. Additionally, since the budget specifies that revenues should remain at or near historic averages, the Ryan plan achieves all of its deficit reduction over the decade through aggressive spending cuts and reforms, with particular focus on Medicaid, low-income support programs, and annually appropriated domestic spending.

President Obama, House Republicans and the CPC should be commended for releasing proposals that seriously attempt to address the nation’s debt problem over the coming decade. Elements of each will be necessary to reach a grand bargain that places the country back on a sustainable fiscal track.

Below is an objective analysis of the CPC’s proposed budget. As with our analysis of Chairman Ryan’s budget, this post will focus heavily on the ten-year budget window. Although it is critical to understand the long-term effects of major policies included in any debt reduction plan, significant uncertainty in projections and lack of specificity in policies make concrete scoring beyond the first decade extremely difficult for these packages.

The CPC’s budget, in a similar manner to Ryan’s, would reduce the size of the debt as a percentage of our economy, or gross domestic product (GDP), to 62 percent by 2022. Notably, this is lower than the debt levels achieved by either the Bipartisan Policy Center’s (BPC) Domenici-Rivlin or the Bowles-Simpson commissions (both of which reduce the debt to 67 percent of GDP by 2022), and significantly lower than the debt level in 2022 under the president’s budget proposal for FY 2013 (76 percent) or the BPC Plausible Baseline* (86 percent).

The chart below illustrates the revenue and spending levels achieved in 2022 by each major budget plan. 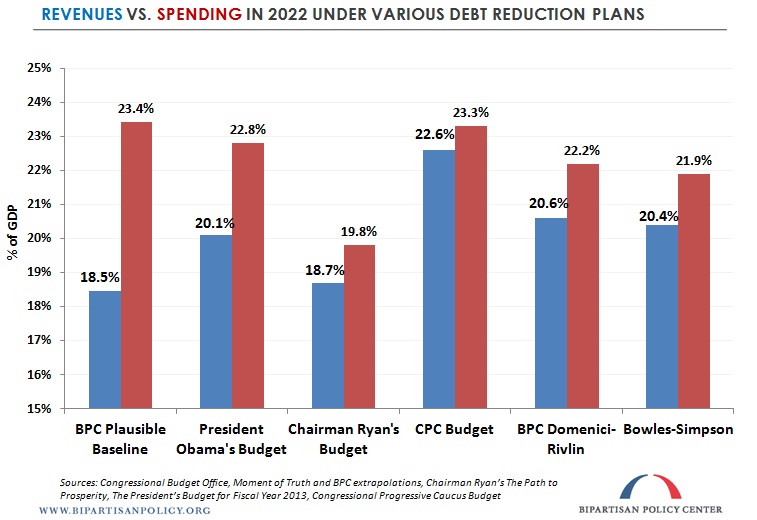 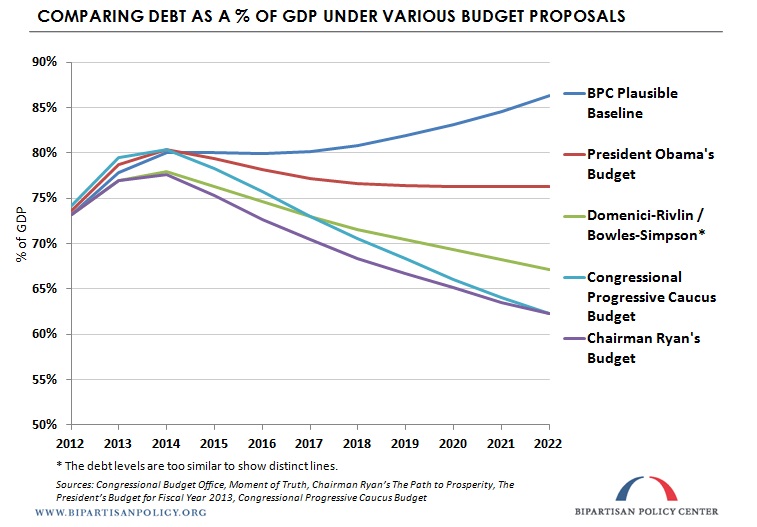 The CPC budget would necessitate an increase of the debt ceiling by roughly $5.5 trillion through 2022 ? an identical amount to that required by the Ryan budget. The president’s plan includes a somewhat higher level of overall debt in the year 2022, and so the requisite increase would be roughly $3 trillion greater for his proposal over the same horizon.

The CPC proposes to allocate substantial funds to initiatives intended to grow the economy and increase domestic investment. Some of these proposals have been circulating for the past few years, and President Obama included many of them in his American Jobs Act (and subsequently, in his FY 2013 budget). They include both targeted tax cuts and spending increases, totaling roughly $450 billion over the decade, according to the CPC. Below is a sample of the proposals:

One significant health care proposal from the CPC is to add a public option for the under-65 insurance market. Many progressives had been pushing to include this in the Affordable Care Act (ACA), but it was not in the final version of the bill. The public option is projected by the Congressional Budget Office to save $104 billion over the decade. In addition, a number of other health policies are recommended in the budget:

Finally, the CPC budget would prevent the 27-percent cut to physicians’ payments under Medicare that is scheduled to be imposed in calendar year 2013. This automatic cut resulting from the sustainable growth rate (SGR) mechanism installed in the 1990s has been avoided in recent years by providing offsetting deficit reduction ? referred to as the “doc fix.” CPC includes and fully pays for this “doc fix” over 10 years, preventing the physician payment cut. 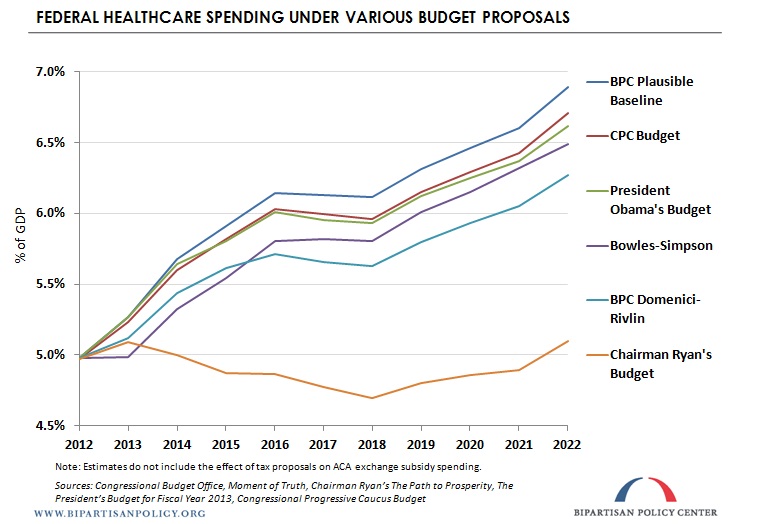 Over five years, the CPC budget would phase out the cap (or taxable maximum) for employees and employers on Social Security payroll taxes. This means that instead of current law, under which each party pays 6.2 percent only on income up to $110,100, both employees and employers would pay the 6.2 percent on all taxable income. Due to the Social Security benefit calculation formula, those who pay additional taxes under this proposal would receive higher benefits upon retirement. This policy is projected to raise $1.4 trillion for the Trust Fund over 10 years, and would extend the solvency of the program.

The CPC budget proposes significant changes to the individual income tax code that would markedly increase progressivity. The wealthy would be asked to pay significantly more than they do today. The Caucus also would make adjustments to the corporate tax and institute additional revenue-raising measures, detailed below. One unquestionably positive aspect to the proposal is the specific and detailed listing of the particular policies that CPC supports. In addition to provisions that would cost money, such as rate cuts and increases in credits or subsides, the budget enumerates the (potentially less popular) changes that would raise revenues. On the other hand ? regardless of one’s views on the total revenue take for the federal government and how the tax burden should be distributed ? because much of the complexity in the individual income tax code would remain in place and the corporate rate would remain uncompetitively high, many observers would not consider it to be a comprehensive tax reform plan. The following are some of the revenue proposals in the budget. For a complete list, please refer to the document itself (pp. 5-8): Individual

First, the CPC budget reverses all of the cuts enacted in the Budget Control Act (BCA) for both defense and non-defense spending. Both the automatic sequester cuts and the original caps on discretionary spending are waived.

On top of reversing those cuts, the CPC’s budget proposes substantial increases to domestic and international affairs spending, totaling $1.75 trillion over the next 10 years. However, exactly how much of the increase is dedicated to annually appropriated budget programs versus mandatory spending is unclear. Some of this would come in the form of short-term stimulus spending, as described in the Growth Initiatives section above, but the large majority would serve to increase the government’s commitment to low-income support programs, education, international development, veterans’ benefits and services, community development and housing assistance, and research on energy, health care, science, and the environment.

Alternatively, defense spending would be cut even deeper than it is scheduled to be under the BCA’s sequester, predominantly through a large reduction in force structure, private contractors, and the procurement and updating of weapons systems. Moreover, the CPC’s budget would eliminate all funding for any operation in Iraq or Afghanistan after FY 2013. For reference, the president’s budget, BPC’s Domenici-Rivlin, and Bowles-Simpson budget for spending of roughly $40 billion annually on these operations through the latter half of the decade. 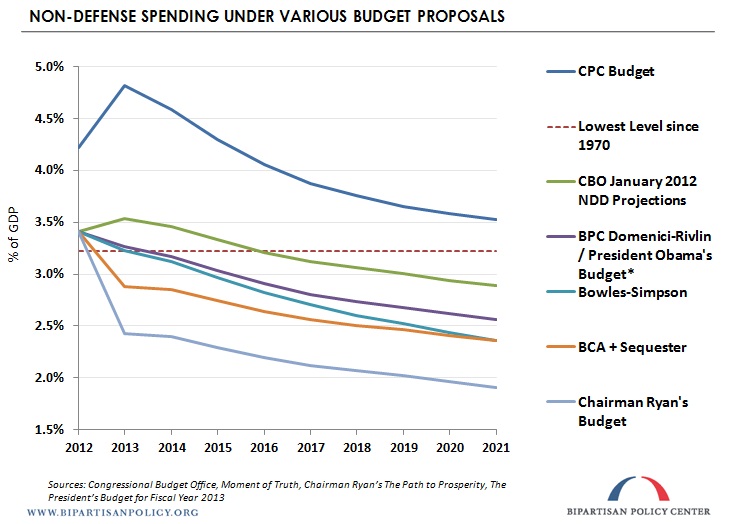