The United States is in the middle of a public health crisis. Based on provisional data from the Centers for Disease Control and Prevention (CDC), nearly 50,000 Americans died from opioid overdoses in 2017. Overdose deaths involving synthetic opioids such as fentanyl have tripled from 2015 to 2017. Overdose deaths involving fentanyl and fentanyl analogues are particularly stark in states east of the Mississippi River such as Ohio, Massachusetts, North Carolina, and New Jersey. 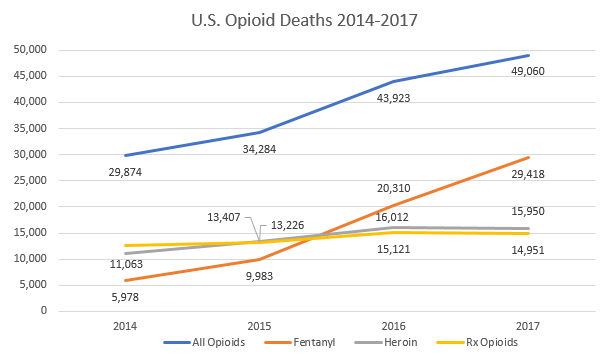 Since enactment of the Comprehensive Addiction and Recovery Act (CARA) in 2016, Congress has taken steps to address these staggering trends.

First, Congress has significantly increased the amount of federal support for programs to combat the opioid crisis, with commitments of $6 billion in new funding over FY2018 and FY2019. In March 2018, Congress enacted over $3 billion in new opioids funding provided in FY2018 appropriations legislation. For FY2019, Congress is in the process of advancing Labor, Health and Human Services appropriations of $3.7 billion in funding to address the opioid epidemic.

Second, Congress has undertaken a flurry of activity on legislative solutions to combat the opioid crisis. On June 22, 2018, the House passed H.R. 6, the Substance Use-Disorder Prevention that Promotes Opioid Recovery and Treatment (SUPPORT) for Patients and Communities Act with overwhelming support (396-14). It’s intended to serve as a legislative vehicle for Senate legislation and many of the other 55 House-passed bills aimed at curbing opioid addiction. This legislation includes 63 individual bills, the majority of which approved with strong bipartisan support at the committee level. It also includes several provisions that align with BPC recommendations to address the opioid epidemic in four key areas:

Additional details on the SUPPORT for Patients and Communities Act are provided in the House Energy and Commerce Committee one-page summary and section-by-section summary.

The Senate has advanced two major bills through committees of jurisdiction ? the Opioid Crisis Response Act (OCRA) and the Helping to End Addiction and Lessen (HEAL) Substance Use Disorders Act. Both OCRA (April 24) and the HEAL Substance Use Disorders Act (June 12) were approved with unanimous support by their respective Senate committees. Combined, 37 bill sections in OCRA and HEAL line up with House H.R. 6 SUPPORT sections. The table below lists provisions included in both the House and Senate legislative packages which are also in line with BPC recommendations.

BPC applauds Congress’s bipartisan work to respond to the opioid crisis. We encourage congressional leaders to look for additional opportunities to make policy changes ? informed by robust evidence ? to curb the overprescribing of opioids, increase access to medication-assisted treatment, and advance other policies that address the evolving nature of the issue.

How Can We Fix the Opioid Crisis: Four Ideas

The Opioid Epidemic and its Effect on Young Children