On September 10, the Bipartisan Policy Center (BPC) released its comprehensive debt limit analysis for fall 2013. On May 19 of this year, the debt limit was reinstated at a new, higher level, after having been suspended since February. Upon its reinstatement, the U.S. found itself up against the debt limit with the Treasury Department continuing to operate through the limited borrowing authority provided by extraordinary measures.

In July, BPC had projected that the X Date ? the point at which extraordinary measures and cash on hand are exhausted and Treasury can no longer meet all federal financial obligations in full and on time ? would be reached between mid-October and mid-November. With updated government financial data and a more extensive analysis of daily transactions that will occur in September, October, and November, BPC has narrowed that projected window to October 18 ? November 5. This range will be regularly updated in the coming weeks, as warranted by the data.

We have already hit the debt limit. The U.S. officially reached its statutory borrowing limit of about $16.699 trillion on May 19, 2013. (Technically, Treasury has stayed $25 million below the actual limit of $16,699,421,000,000 since that time). To raise additional funds for paying the nation’s obligations beyond that date, the Treasury Secretary has been using some of the approximately $303 billion in available extraordinary measures. As of August 31, roughly $108 billion of these measures remained. Unless the debt limit is increased, eventually there will come a point when Treasury does not have enough cash to pay all bills in full and on time, and the government will be forced to default on some of its obligations. BPC refers to this date as the “X Date.”

BPC now projects that the “X Date” will occur between October 18 and November 5. This represents a range, which can be thought of as a confidence interval. A more precise estimate is not yet appropriate due to the volatility of revenue and the nature of the government’s financial obligations leading up to and during this period. Furthermore, even BPC’s estimated range for the X Date is a projection, which is subject to some uncertainty. The most significant sources of uncertainty are the quarterly tax payments due in mid-September, which tend to be volatile, along with general economic conditions. While federal government revenue has been strong compared to the previous fiscal year ? coinciding with greater employment, increased corporate earnings, and slow-but-steady economic growth ? there is no guarantee that these trends will continue. 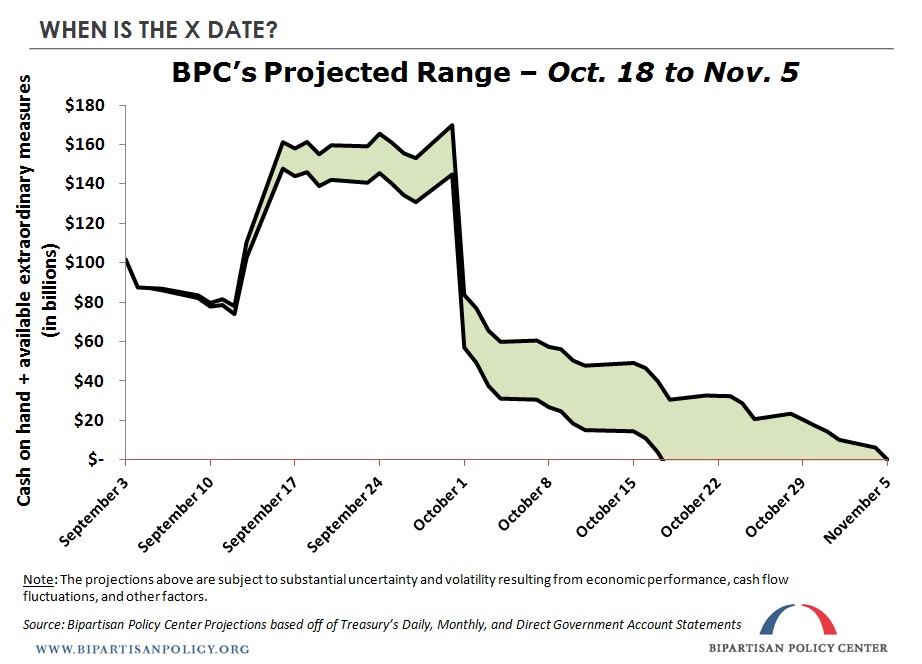 How will Treasury make payments on or after the X Date? We don’t know. This would be an unprecedented situation. If the X Date arrived on October 18 (the start of BPC’s X-Date window), we project that Treasury would be $106 billion short of making $328 billion in scheduled payments through November 15, meaning that 32 percent of those obligations would go unpaid.

In one scenario, Treasury might prioritize some payments over others; our full report provides an illustrative example. Treasury, however, may not find that it has the legal authority or the technical capability to do this (because such prioritization could require extensive reprogramming of computer systems, which may not be possible in a short timeframe). An alternative approach would be for Treasury to wait until enough revenue is collected to make an entire day’s worth of payments at a time, meaning that all payments would be made in turn, but everyone anticipating funds from the government would see delays. While payment delays would be short in the beginning (one or two days), they would quickly cascade. If Treasury were to delay payments in this manner, and the X Date were reached on October 18, for example, Social Security payments due on November 1 would not be received by beneficiaries until November 13.

In any scenario, we assume that Treasury would do whatever it could to ensure that interest on the debt is paid in full and on time.

Substantial debt is scheduled to roll over after the X Date. From October 18 through November 15, over $370 billion in debt is expected to mature. Normally, this would be rolled over in a standard procedure by issuing new debt. Uncertainty surrounding the debt limit, however, could force Treasury to pay higher interest rates on this newly issued debt. Also, while very unlikely, there is a possibility that in a post-X Date environment, Treasury may not have sufficient buyers to complete its standard auction operation.

How much would the debt limit need to be increased in order to get through next year? BPC has projected the magnitude of the debt limit increase necessary to enable Treasury to meet all obligations through calendar year 2014. An increase of approximately $1.1 trillion would be required. There is a great amount of uncertainty in this estimate, however, given the amount of time that is covered.

14186
14187
Unless the debt limit is increased, there will come a point when Treasury does not have enough cash to pay all bills in full and on time