Energy technology innovation is critical for expanding U.S. economic growth, enhancing energy security, and protecting our environment. However, critical federal investments in energy innovation have remained stagnant since 2010. The state of energy innovation and investments is described in a detail in BPC’s American Energy Innovation Council (AEIC) in its third report, Restoring American Energy Innovation Leadership: Report Card, Challenges, and Opportunities, released today. The report finds that Congress and the administration have a mixed record on implementing AEIC recommendations to promote energy innovation and urges greater federal investments as a means of achieving the country’s economic, security, and environmental goals. 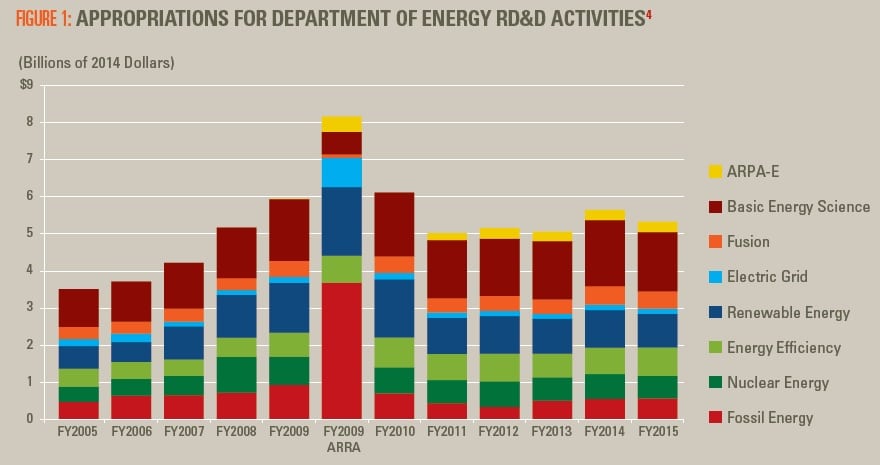 Six corporate leaders make up AEIC: Bill Gates, Jeffrey Immelt, Chad Holliday, Tom Linebarger, Norm Augustine, and John Doerr. They came together in 2010 because they shared a common concern over America’s insufficient commitment to energy innovation. In its previous reports from 2010 and 2011, AEIC recommended several federal policy actions to promote energy innovation. However, the federal government has a mixed record on these recommendations. Tangible progress has been made towards the development of a comprehensive national energy strategy through the release the Department of Energy’s (DOE) Quadrennial Technology Review and its follow-up Quadrennial Energy Review. Moreover, the Department’s Energy Innovation Hubs, Energy Frontier Research Centers, and Institutes for Manufacturing Innovation provide critical, collaborative forums for pursuing of energy research and for accelerating, the commercialization of new manufacturing technologies.

Nevertheless, inadequate government funding for energy RD&D over the last five years represents a major failure in U.S. energy policy. Public investment in energy RD&D remains less than one-half of one percent of the annual nationwide energy bill. The scale of energy RD&D is still just one third of what AEIC recommends for the United States to compete effectively in global markets, diversify away from foreign oil, and mitigate harmful environmental impacts from energy production. Private energy innovation investments, which often build on federally-funded science and RD&D, are also flat or declining.

Progress on AEIC Recommendations to Promote Energy Innovation is Uneven

Create an independent National Energy Strategy Board charged with developing a National Energy Plan for Congress and the executive branch. Alternatively, develop and implement a comprehensive, government-wide Quadrennial Energy Review that aligns capacities of the public and private sectors.

Create Centers of Excellence in Energy Innovation with each center receiving annual funding of $150?$250 million.

Develop a funding regime that is dedicated, consistent, and not beholden to annual appropriations.

Innovation remains an indispensable strategy for meeting the competitiveness, security, and environmental challenges of the American energy system.

RD&D investments made decades ago form the basis for the country’s competitiveness today. Although the United States maintains a significant lead in energy technology overall, American public investment in energy RD&D also faces increasing competition from other nations. The United States must build a pipeline of scientific discovery and invention that businesses can translate into globally competitive clean energy products. If these investments are not made, other countries have demonstrated they will step in to sell new technologies in energy production and delivery to the world.

By diversifying the energy technologies businesses and consumers rely on, the United States can reduce its economic vulnerability. For instance, U.S. transportation depends almost entirely on petroleum, the price of which is subject to the vagaries of the global market. This volatility threatens American economic wellbeing. To overcome this problem, we must develop technologies that enhance the resilience of our energy system.

In the face of climate change, the United States must drive down the cost of clean energy and energy efficiency technologies as fast as possible, both to make them viable choices worldwide and to ensure that American companies lead markets. Energy innovation offers a global approach to slowing and coping with climate change and is in the best interests of the United States.

The energy challenges facing the United States today demand a step-change in innovation investment. Although the United States still benefits from past progress on clean energy innovation, accelerated discovery and invention are essential to fully transforming our energy systems. The federal government has a critical role to play in this process; that role must include RD&D as a complement to regulatory and tax-based approaches. As the federal government invests more in RD&D, businesses and investors will be better able to justify and continue their own research, development, and venture investments. These actions will help to address supply and demand challenges in the energy system and drive down the unsubsidized cost of clean energy.

Energy innovation is an increasingly important driver of modern life; it is critical to building American companies’ global market share, creating jobs, avoiding disruptions to the economy, and reducing climate impacts. Our current energy abundance is in large part the product of past investments. Future generations also deserve a rich suite of options that will enable them to address the economic, environmental and security challenges described in the AEIC report.

“Any serious business leader would recognize that the country needs to take advantage of its current strength and act now to create a clean energy future. Only by investing in ingenuity and restlessness will the United States preserve its global leadership and ensure its future prosperity.”