The tools display the estimated $306.7 billion in payment obligations for August 2011 and enable users to choose which programs to pay for with the available $172.4 billion in monthly revenue.

Under BPC’s analysis, 44 percent of U.S. government bills would go unpaid if the federal government fails to raise the debt ceiling by the August 2 deadline. 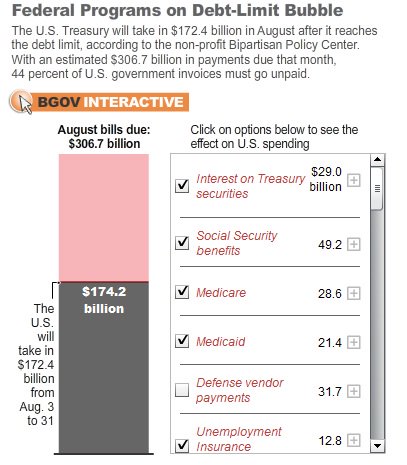 Check out both tools and try to make the difficult choices that would prioritize programs and balance the books:

“Treasury would exhaust all inflows just by paying six major items: interest, Medicare, Medicaid, Social Security, unemployment insurance and defense vendors. Without cutting from these six, there would be no money for entire departments such as Justice, Labor and Commerce among many others, or for veterans’ benefits, IRS refunds, military active duty pay, federal salaries and benefits, special education, Pell Grants for college students or food and rent payments for the poor,” said Jay Powell in a POLITICO op-ed. Powell is a Visiting Scholar at BPC and a former Under Secretary of the Treasury for Finance under President George H. W. Bush.