Earlier this month, our Commission on Political Reform hosted a town hall conversation featuring more than a dozen commission members ? including national political figures, volunteer and religious leaders, business executives, academics, state and local elected officials, and journalists. The meeting examined how polarized our country is, the causes of that polarization and its effect on our government and decision-makers.

Here is a round-up of our favorite quotes from the lively town hall meeting. You can find more commentary on bipartisanship by following BPC on Pinterest and on Twitter @BPC_Bipartisan using the hashtag #EngageUSA. 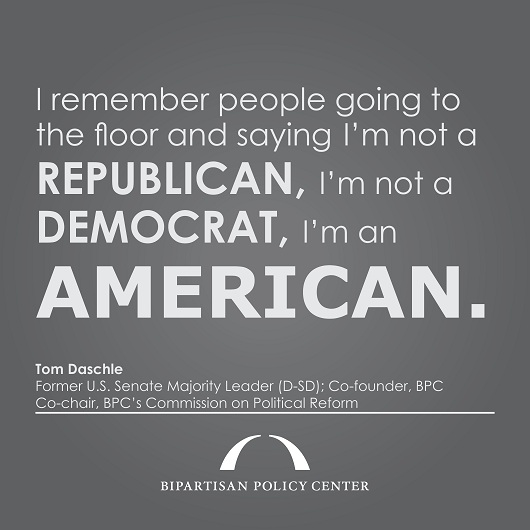 Tom Daschle on his advice to members:

“You know if I would if I could go back and be leader again I would insist that we have one joint caucus at least every other week. I would prefer them every week. We had joint caucuses only after disasters. Right after the 9/11 crisis we had joint caucuses and incredibly we bonded and we really, there was a chemistry among Democrats. I remember people going to the floor and saying I’m not a Republican, I’m not a Democrat, I’m an American. And they, they, there was a sense of unity. And after the anthrax attack in my office we had joint caucuses but then they dissipated. We don’t have these joint caucuses anymore and it’s a small thing and it would probably get lost on most people but the importance of that but there’s got to be a vehicle a venue for communication. ” 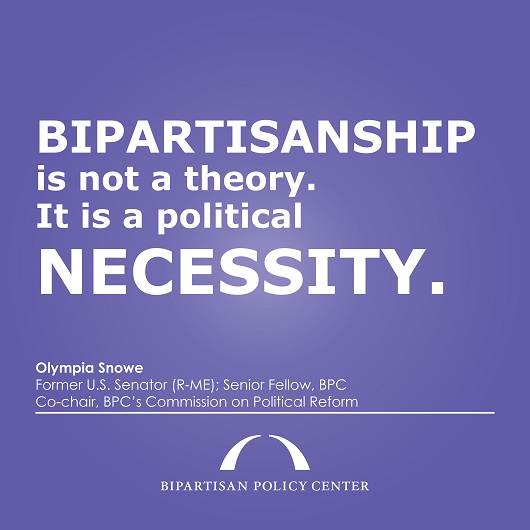 “Often times when you’re mending and so on you give a give and take in that process and it ultimately gets you to a place where you say well I didn’t get everything I wanted but I got some of what I wanted. Everybody doesn’t expect that you’re going to get 100% of what you wanted, everybody has one view of how to address the debt but you don’t expect that you’re going to get your 100% adopted. And the same is true in Congress, they have to reconcile those differences and the only way you can do that is through a legitimate process and it has to be bipartisan. Somebody once said “bipartisanship is not a theory it’s a political necessity.” 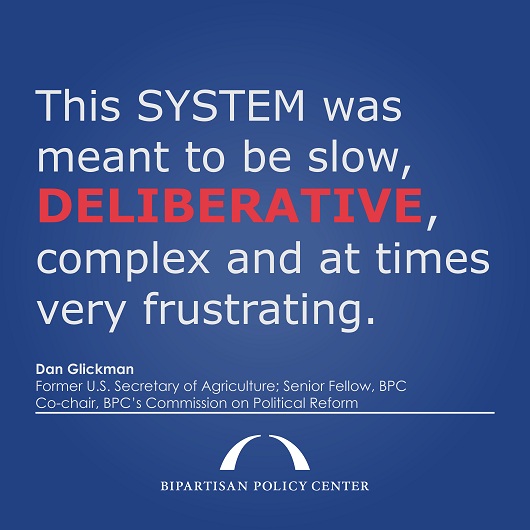 Dan Glickman on our political system:

“Our founding fathers really wanted our system to not work very well. So we got to start with that premise. They created a system that institutionalized conflict and gridlock because they created separation of powers. They didn’t want a strong executive versus a strong congress. They wanted an equal congress and an equal executive and then they further complexified it by dividing congress into two equal bodies. So the whole thing was designed so that we wouldn’t be able to run roughshod over anybody and we couldn’t move very fast. We, it’s the proverbial one foot on the break and one foot on the accelerator that’s what they wanted. OK. Now the problem is that in order to get anything done you’ve got to work through exquisite and important relationship building and develop trust in order to actually get through that, that great barrier that the Constitution had in mind. What’s happened in my judgment in recent years is, is that those barriers have been more difficult to jump over because of all the factors that we’ve talked about today. But even if we get, make changes and get through this barriers, this country still operates pretty well because there’s a kind of fundamental distrust of giving too much power to the government and so I don’t want people to think that if we make any of these all changes that everything is going to be hunky dory we’re going to be able to solve every problem overnight. This system was meant to be slow, deliberative, complex and at times very frustrating.“

Former Governor of Idaho, U.S. Secretary of the Interior, and U.S. Senator; President and CEO, American Council of Life Insurers 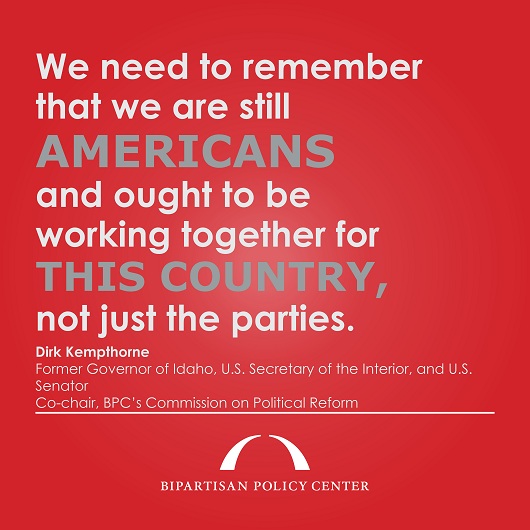 “I really think American politics today has migrated from and NFL atmosphere to Hunger Games. NFL you do everything possible to be victorious, you out think, outplay and out hit your opponent. But even in the NFL and athlete will reach down and lift their opponent back up. In Hunger Games you make sure your opponent is never ever capable of getting up again. We need to remember that we are still Americans and ought to be working together for this country, not just the parties.“