The landslide victory of the Justice and Development Party (AKP) in Turkey’s November 1 election came as a shock to many. Turkish pollsters had predicted the outcome would mirror that of the June 7 election when the AKP lost its parliamentary majority with nominal gains resulting in either a razor-thin majority or another hung parliament.

The latest election result, however, comes as less of a surprise when placed in the context of Turkey’s increasingly tumultuous environment and after deciphering President Recep Tayyip Erdogan’s divisive and fear-driven campaign strategy.

Erdogan’s AKP regained its parliamentary majority and surpassed voting predictions by a large margin, earning 49 percent of the national vote a 9 percent increase from June 7 and gained 317 seats in parliament, meeting the 276-seat requirement. The Nationalist Movement Party (MHP) suffered a dramatic 4 percentage-point loss, earning 11.9 percent of the vote, and the Peoples’ Democratic Party (HDP) lost over 2 percentage points with 10.8 percent of the vote, barely surpassing the 10 percent election threshold. The Republican People’s Party (CHP) vote share, however, remained the same, hovering around 25 percent.

The Bipartisan Policy Center (BPC) forecast was close to the mark after analyzing the June 7 election breakdown to determine major shifts in voting patterns and where the AKP would need to win back voters. In an earlier report, we predicted that Erdogan and the AKP’s divide-and-conquer strategy would garner enough support to regain a parliamentary majority.

Vote Thresholds in the Turkish Parliament 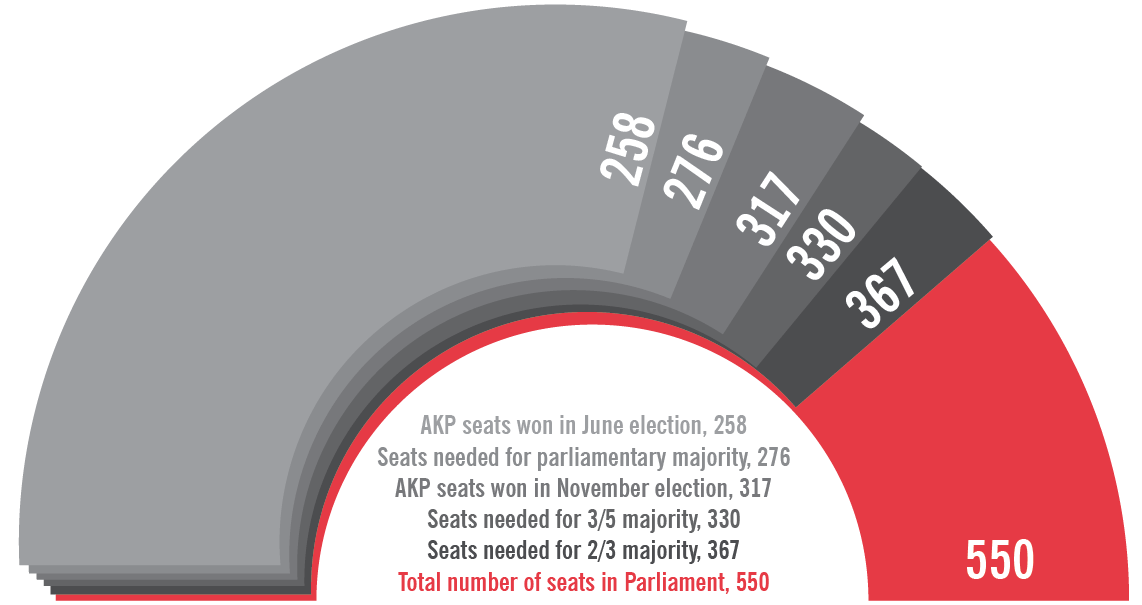 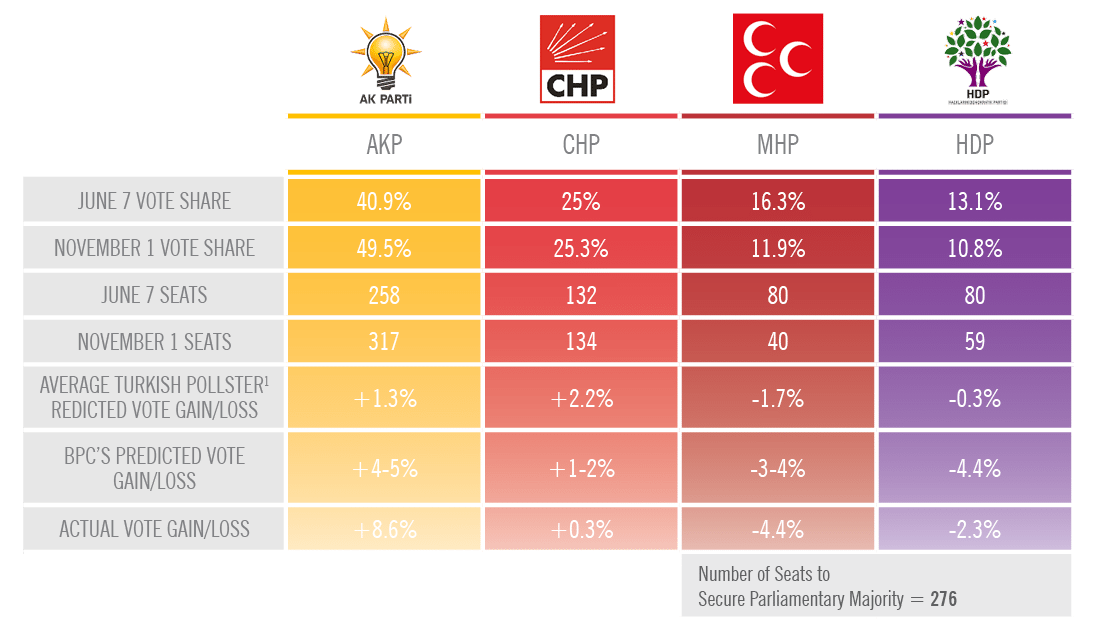 This report looks at voting patterns in Turkey’s November 1 election and highlights five distinct trends, including where the AKP’s calculated gains came from:

Several lessons emerge from this most recent election:

Turkey’s stability and security, however, will only be tested further under AKP leadership. Creeping authoritarianism and the Islamization of Turkish society, a reeling economy, an escalated Kurdish conflict, the mounting Syrian crisis, and the risk of further Islamic State attacks in Turkey will challenge the AKP as it balances continued provocation and fear-mongering with reconciling the deep divisions in society. It remains to be seen how the AKP will respond to these critical issues moving forward, but stability in Turkey and the surrounding region hinges on it.