When the Obama-era Environmental Protection Agency (EPA) drafted the Clean Power Plan to reduce carbon dioxide (CO2) emissions from existing power plants, it did so based on the state of the power sector in 2012. The Trump EPA is now poised to release a proposed replacement rule. In the intervening years between these two rule making efforts, the power sector has evolved markedly.

The changes- driven primarily by low natural gas prices, but also other factors such as falling renewable energy costs and environmental policies- are captured in the maps and charts below.

CO2 Emissions from the Power Sector Have Fallen 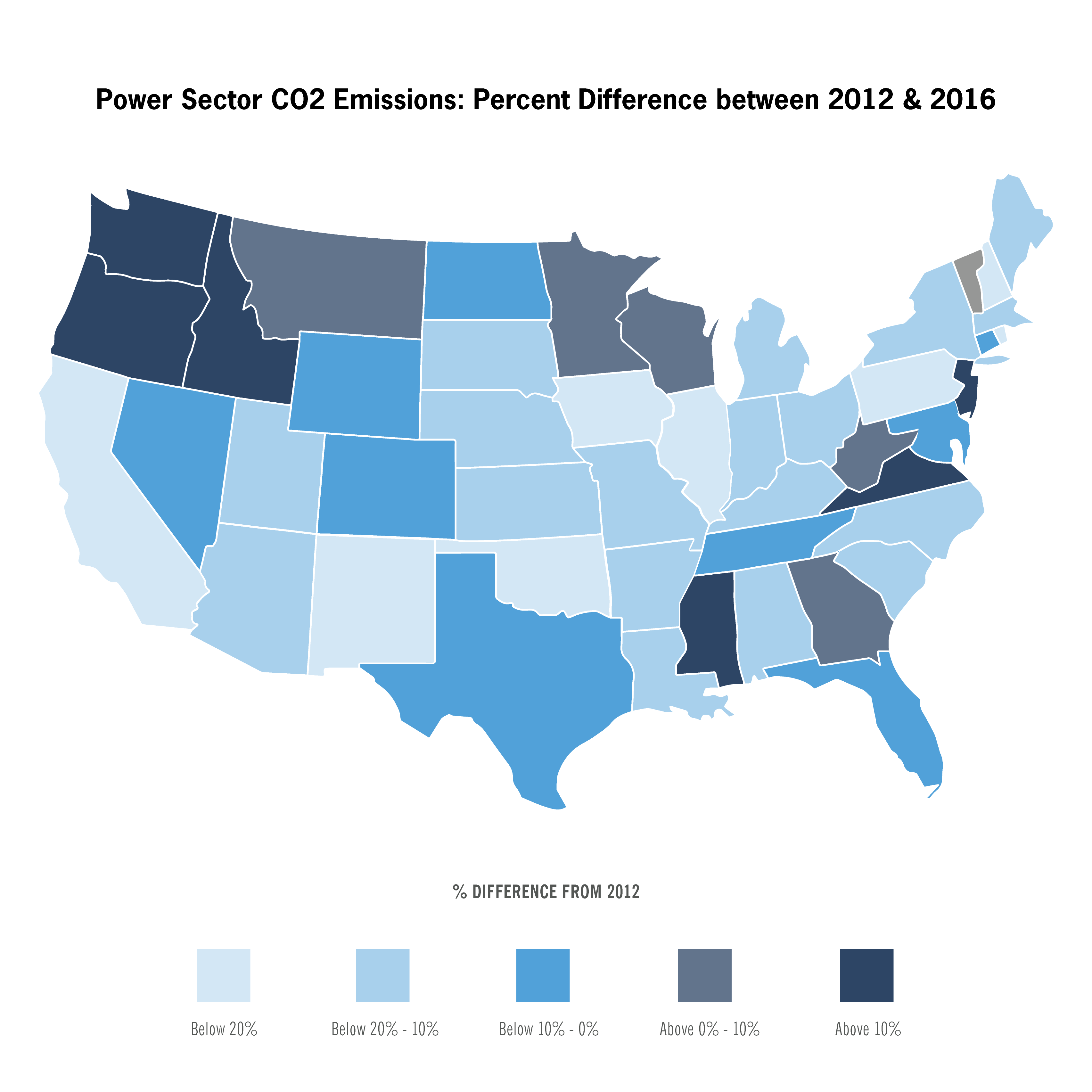 Power sector emissions have declined in many states in recent years. The reductions in several states were large enough that, by 2016, their CO2 emissions had already fallen to levels that would have satisfied the Clean Power Plan emission reduction goals. If the Clean Power Plan had taken effect, states would have had until 2030 to achieve these reductions in either total emissions (measured by tons of CO2) or emission rates.

As of 2016, at least 13 states had power sector carbon emissions that were at or below the final mass-based goals set out in the Clean Power Plan: California, Delaware, Idaho, Maine, Massachusetts, New Hampshire, New York, Oklahoma, Oregon, Pennsylvania, Rhode Island, South Dakota and Washington.

And, all but eight states were making progress toward their Clean Power Plan goals, with total power sector emissions down relative to 2012 levels. The eight states with increased emissions through 2016 were Georgia, Minnesota, Mississippi, Montana, New Jersey, Virginia, West Virginia and Wisconsin.

However, without a federal requirement to reduce CO2 emissions, states have varying levels of backstops to ensure power sector emissions reductions are sustained. For example, in the absence of a federal policy, the early retirement of at-risk nuclear units could lead to increased emissions if gas replaces the carbon-free generation. 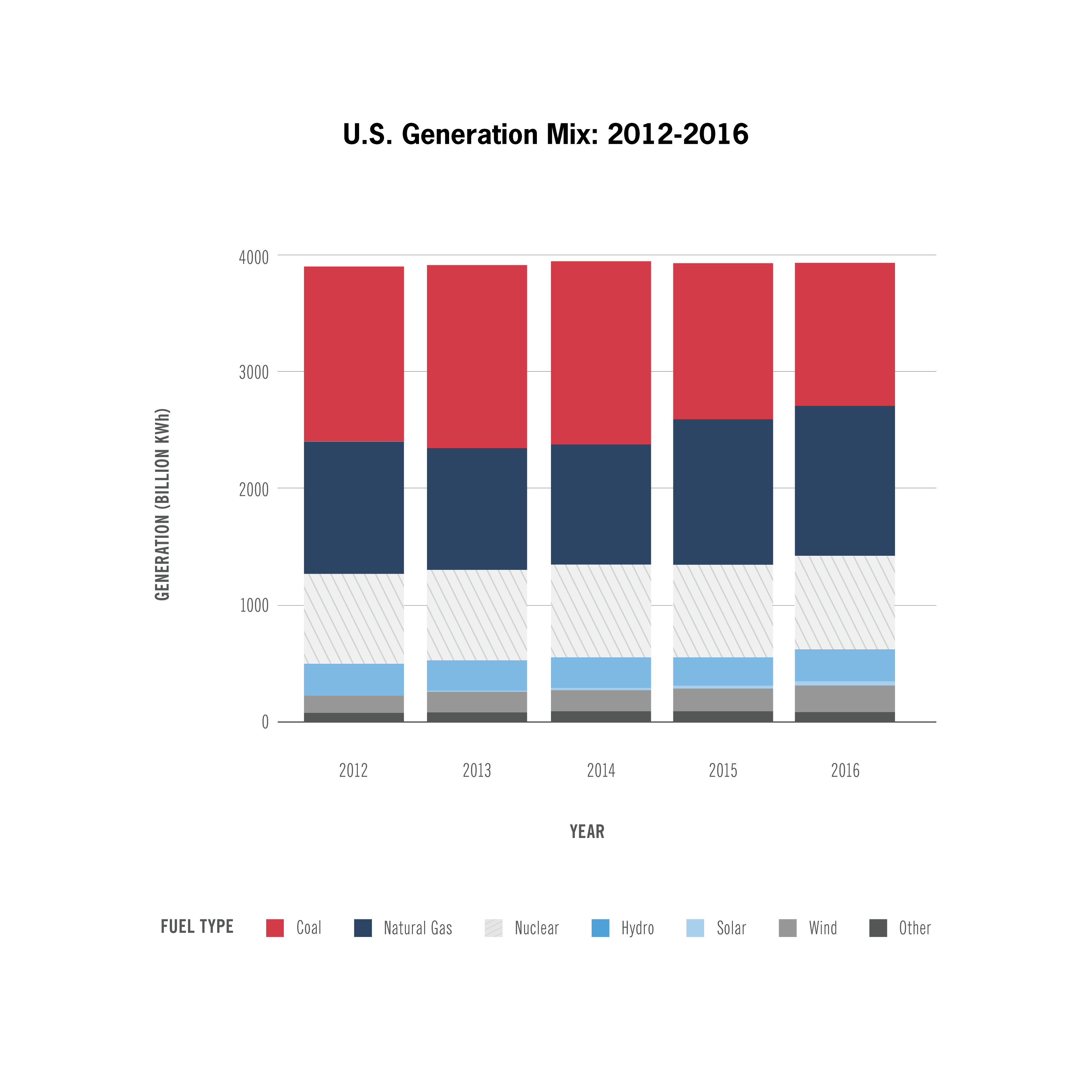 Coal Retirements Contributed to the Drop in Coal Generation 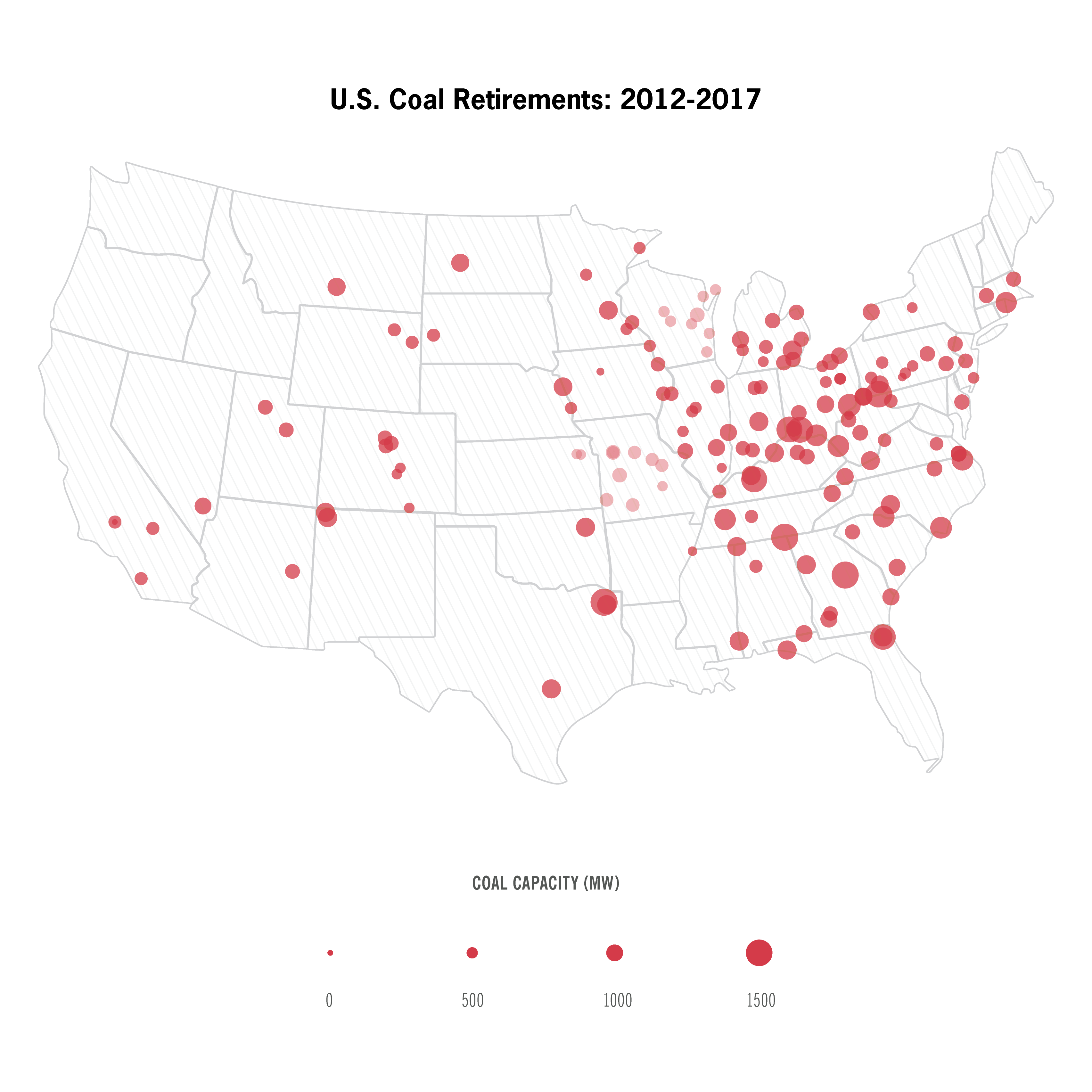 Between 2012 and 2017, about 39 gigawatts of coal shut down. Most of those retirements were in the Eastern Interconnect. There are still about 257 gigawatts of coal capacity remaining in the continental United States. 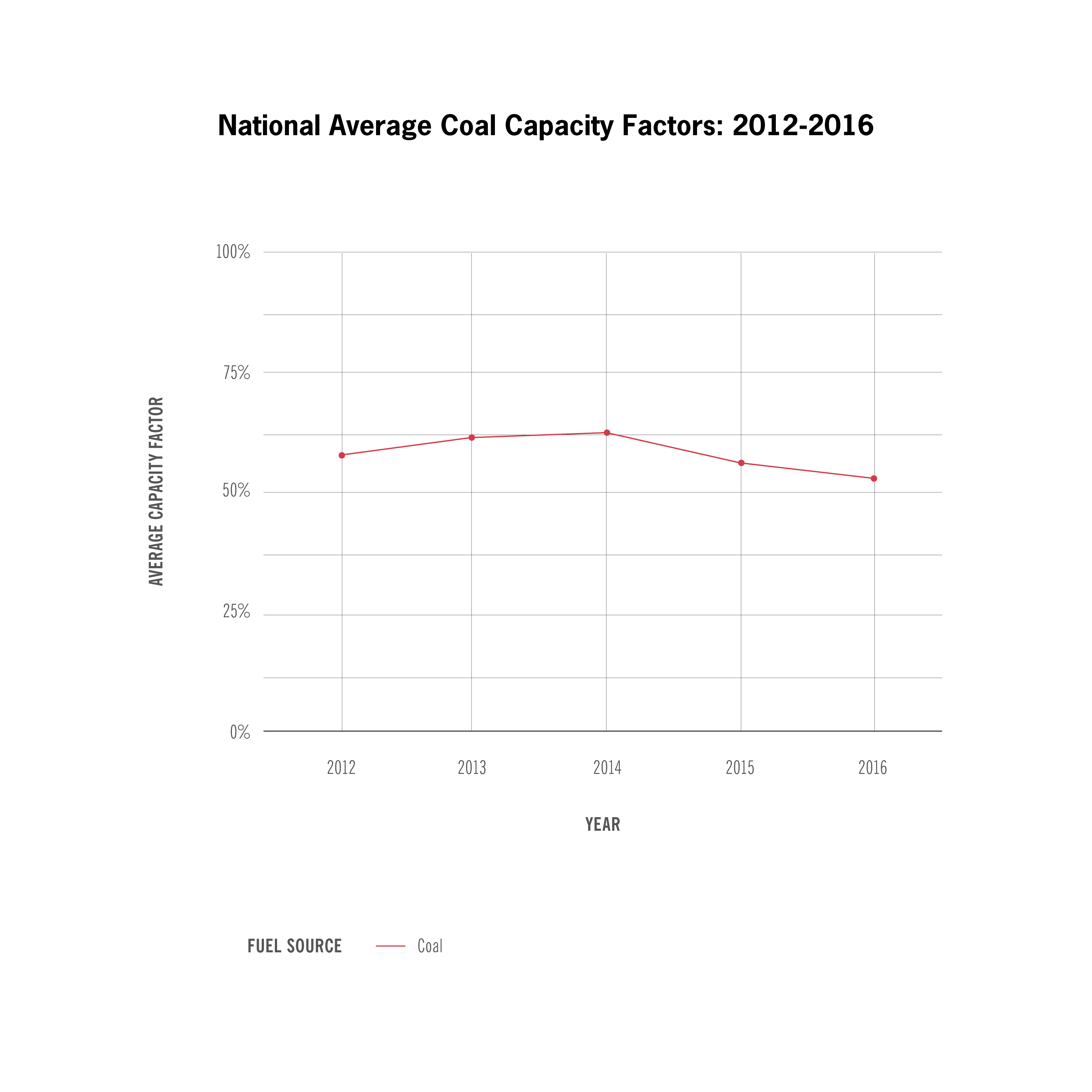 More Gas, Wind, and Solar on the Way 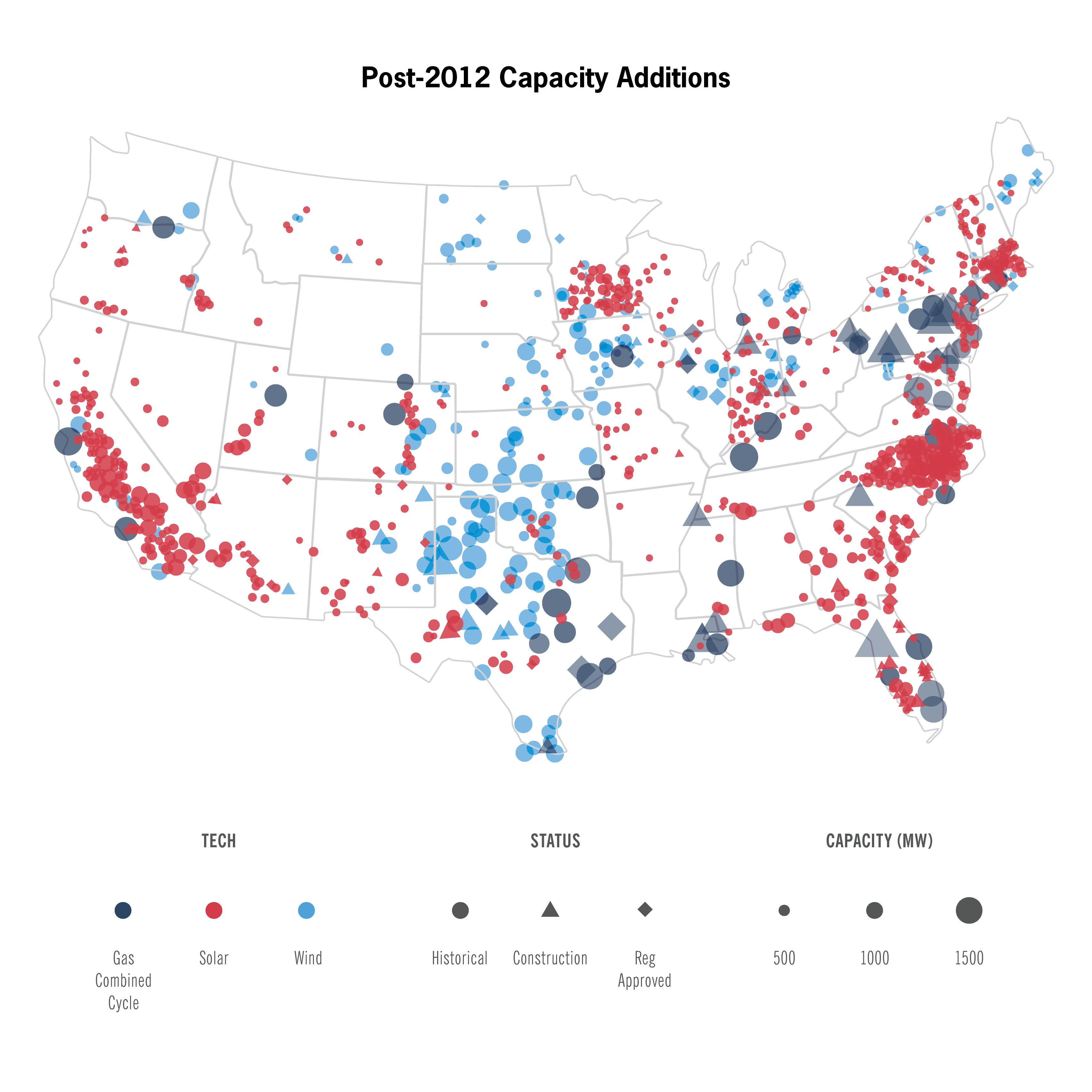 Post-2012 capacity additions are reinforcing these trends toward lower carbon emissions. The map shows new units that have come online as of 2013, are currently under construction, or have received regulatory approval to come online by 2023.

Next Steps for the EPA

The EPA is now poised to propose a Clean Power Plan replacement rule. It remains to be seen whether the new rule will help lock in or accelerate the power sector emission reduction trends of the past few years – or not.

The Clean Power Plan: What Happens Next?