In the ongoing debate over how to best allocate scarce federal resources, it is important to assess the state of public investment in young children and to ask whether current investments reflect the critical importance of the early childhood years.

Young children are simultaneously America’s most valuable and most vulnerable asset. Most valuable because our nation’s long-term success and prosperity depends on today’s young children growing up to be responsible, productive, healthy adults. Most vulnerable because today, millions of young children in the United States are growing up in environments and under circumstances that not only prevent them from realizing their full potential, but put their cognitive, social, and emotional well-being at risk.

Young children are simultaneously America’s most valuable and most vulnerable asset.

To inform the current policy debate about how government can more effectively support young children and their families, the Bipartisan Policy Center commissioned the Urban Institute to undertake an in-depth analysis of federal and state spending on American children ages 0-8. The detailed results of that analysis are described in a separate report titled Spending on Children Ages 8 and Younger. This issue brief highlights several main findings from the analysis and discusses their relevance for policymakers interested in ensuring that current and future patterns of public investment reflect the high stakes for our country’s future in promoting young children’s healthy early development. One important finding is that federal investment in young children is small as a share of overall federal spending. A second key finding is that federal spending on the 0-8 age group is dominated by health and tax-related expenditures, with much less support directed to child care and early learning. At the state and local level, meanwhile, the bulk of public investment is focused on educating school-aged children.

Together, these results point to a gap in public investment during the earliest years to ensure that all children are developmentally prepared when they enter school and on a path to succeed in school by the time they reach third grade.

Figure 1. Federal Outlays on Social Security, Medicare, and Medicaid for Adults Are Nearly 10 Times Larger than Total Outlays for Children Ages 8 and Younger 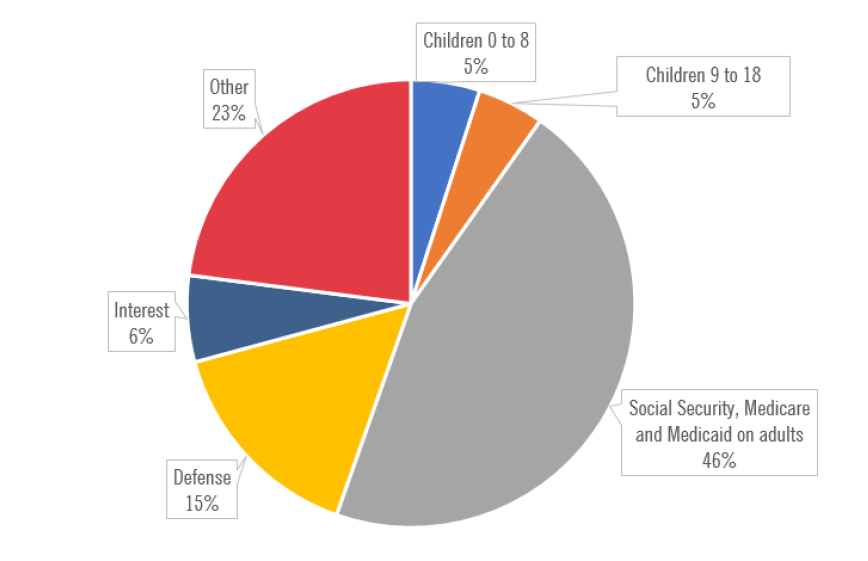