The following recommendations are from BPC’s Task Force on Managing Disorder in the Middle East.

On October 16, Iraqi government forces took control of the contested city of Kirkuk ? and its oil fields ? as Kurdish Peshmerga forces withdrew from positions they had held since 2014. The loss of Kirkuk, sometimes described as the Kurds’ Jerusalem, brought a dramatic end to the enthusiasm aroused by the Kurdistan Regional Government’s September 25 independence referendum. Where just weeks ago Kurdish leader Masoud Barzani anticipated negotiating an exhilarating new era in Kurdish history, now, amidst mutual recriminations, he is calling on Kurds to avoid turning against each other. Barzani’s supporters are accusing politicians affiliated with his rival, the late Jalal Talabani, of selling out Kirkuk by reaching a secret deal with Baghdad. Barzani’s critics, in turn, argue that by pushing prematurely for a referendum with an eye to his own political interests, Barzani brought the current crisis upon himself. As a result there is a real chance that Kurdish politics will revert to the internecine fighting that wracked northern Iraq in the 1990s. 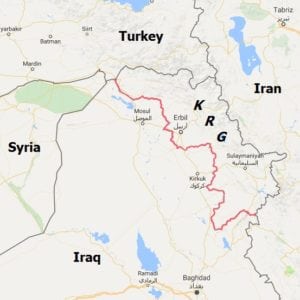 For Washington, which helped manage a successful campaign in which Kurdish and Iraqi forces worked together to drive ISIS out of Mosul, developments in Kirkuk represent a dangerous setback. With Kurdish and Iraqi forces turning on each other, and the possibility that Kurdish forces will do the same, ISIS, badly bloodied, may have more room to maneuver. While the U.S. government pressured Barzani to cancel his proposed independence referendum in return for subsequent support in negotiating with Baghdad, it failed to convince him. As a result, Washington found itself in the awkward position of joining with Iran in tacitly supporting Iraqi moves in Kirkuk at Barzani’s expense. Now, a key U.S. partner has suffered an embarrassing defeat, putting at risk one of the few islands of relative stability in a shattered region.

On the positive side, Baghdad’s victory will help bolster the political fortunes of Iraqi Prime Minister Haidar Abadi against more pro-Iranian challengers in upcoming elections. Yet the role played by Iran in this victory, including allegations that Iranian General Qassim Suleimani negotiated the withdrawal of Peshmerga units from the city, also makes Kirkuk another troubling example of Tehran’s growing influence. Certainly Iran has been eager to present it this way, undertaking an extensive social media campaign to hype (perhaps unjustifiably) the role Iranian-backed Shiite militias and commanders played in the Kirkuk operation.

Following on the recent capture of Raqqa in Syria and coming on the heels of President Trump’s announcement of a new plan for confronting Iran’s growing power in the Middle East, the crisis in Kurdistan risks significantly disrupting U.S. policy. Before the situation gets even worse, here are four steps that Washington can take to help stabilize it:

The loss of Kirkuk brought a dramatic end to the enthusiasm aroused by the Kurdistan Regional Government’s September 25 independence referendum.

The Kurdish Referendum: What Comes Next?

Principles for a New U.S. Strategy in the Middle East