An estimated 12 million Americans are currently in need of long-term services and supports (LTSS)?defined as institutional or home-based assistance with activities of daily living such as bathing, dressing, or medication management?including both seniors and persons under age 65 living with physical or cognitive limitations. In the next two decades, the U.S. health care system will face a tidal wave of aging baby boomers. This, among many other factors, will create an unsustainable demand for LTSS in the coming years.

Fewer family caregivers, increasingly limited personal financial resources, and growing strains on federal, state, and family budgets will further complicate efforts to organize and finance services. Although there is tremendous variation in what is, or will be, needed, fully 70 percent of people who reach the age of 65 will require some form of LTSS at some point in their lives. The number of Americans needing LTSS at any one time is expected to more than double from 12 million today to 27 million by 2050. Indeed, the demand for LTSS will substantially outpace the rate of growth in the U.S. economy over the next decade and drive significant growth in Medicaid spending.

Potential solutions for the nation’s long-term care challenges will be viewed by policymakers in the context of the current political and fiscal environments, which include significant concerns about the long-term cost of major entitlement programs and long-term public debt. The Office of the Actuary of the Centers for Medicare and Medicaid Services (CMS) estimates that Medicaid spending on LTSS will grow by an average of 6 percent annually from 2012 to 2021, far faster than GDP. Notably, the CMS actuaries expect that the babyboom generation, when they begin to exceed the age of 85 in the 2030s, will start to drive even faster growth in Medicaid LTSS spending. The Congressional Budget Office projects that public and private spending on LTSS for the elderly will grow from 1.3 percent of GDP in 2010 to 3 percent of GDP in 2050, assuming that the prevalence of obesity and functional limitations does not change.

If the growth of government spending continues to outpace taxes and other revenues, public debt is on course to grow to levels that are unprecedented in U.S. history. Without changes in policy, the nation faces challenging trade-offs between spending to meet our commitments to older and low-income Americans and investments in the nation’s future prosperity. Against this background, policymakers seeking to address the challenge of financing and delivering LTSS for an aging population will be looking for reforms that will reduce the rate of growth in spending over the long term through greater efficiency in public programs for those who need them and an increased reliance on privately funded solutions to constrain the need for publicly funded LTSS. 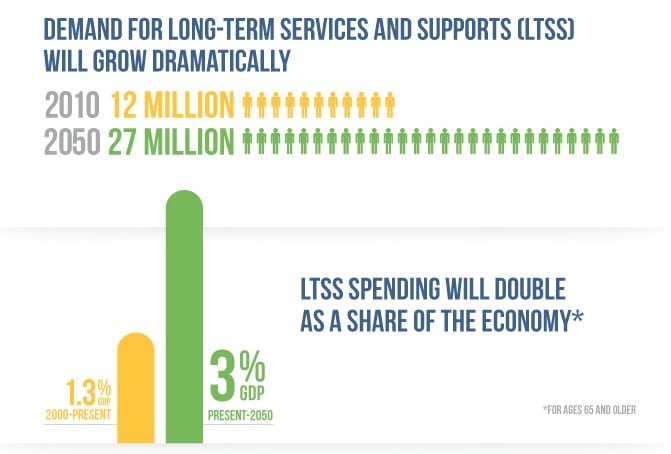 Current federal fiscal challenges, combined with partisanship in Congress, make it an especially difficult environment in which to enact comprehensive financing reform of LTSS. That said, given the long-term challenges facing families, states, and the federal government, it is important that policymakers begin to lay the groundwork for action before millions of baby boomers begin to need assistance. Failure to do so will undoubtedly overwhelm the existing structure, which requires those in need of LTSS to rely on individual family resources, family caregivers, and, once private resources are exhausted, the Medicaid program. As such, the looming financing implications for the Medicaid program?and the need for Democrats and Republicans to come together to enact solutions?cannot be overstated.

In December 2013, the Bipartisan Policy Center (BPC) launched a Long-Term Care Initiative under the leadership of the BPC Health Project leaders, former U.S. Senate Majority Leaders Tom Daschle (D-SD) and Bill Frist (R-TN), as well as former Congressional Budget Office Director Alice Rivlin and former Wisconsin Governor and Secretary of the U.S. Department of Health and Human Services Tommy Thompson. The Long-Term Care Initiative will propose a series of bipartisan policy options in late 2014 to assist in the effort to build consensus on how to finance and deliver long-term care?referred to in this paper as longterm services and supports (LTSS)?at a time of political discord and fiscal constraints. The initiative seeks to raise awareness about the importance of the issue, bringing it to the attention of the public, as well as to policymakers, and making a strong case for action. This paper sets the stage for BPC’s recommendations by identifying the major challenges and key questions in the financing and delivery of LTSS for both seniors and individuals under age 65.

The U.S. needs an immediate strategic shift at the southern border