What if federal budget decisions were in your hands? A new tool lets each American see the impact of changing priorities on issues like health care, Social Security, and income tax rates.

“With the federal budget deficit increasing once again and a presidential election underway, now is the perfect time for citizens to engage on the issue with the
Federal Balancing Act
budget simulation,” Bill Hoagland, senior vice president at BPC, said. “This tool gives individual citizens the opportunity to easily craft a budget that reflects their priorities.” 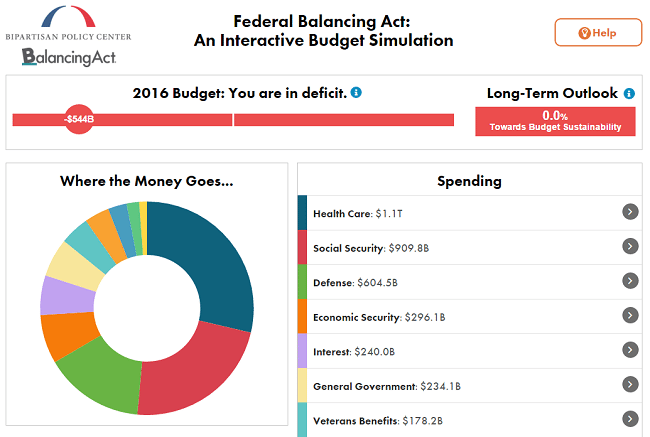 The
Federal Balancing Act
simulation begins with a breakdown of the budget for the current fiscal year, which is projected to run a $544 billion deficit, and includes information about how the government collects taxes and what programs the money is spent on. Users are then able to make changes to tax and spending categories based on their policy priorities. The simulator also projects the impact of those decisions 25 years out.

“Citizens pay trillions of dollars a year in taxes, but few understand the process for collecting and spending that money,” said Chris Adams, president of Engaged Public. “We are changing that with a convenient simulation-based tool that not only shows the public how their federal tax dollars are currently raised and spent, but also asks them to constructively join the decision-making process.”

Users have the opportunity to adjust a wide variety of federal programs, including: health care, Social Security, defense, anti-poverty safety nets, veterans’ benefits and services, infrastructure, education, scientific research, and many others. Changes to revenue sources?such as individual income taxes, corporate income taxes, the federal gas tax and more?can pay for these programs.

“As consumers, Americans have come to expect information about what they buy,” Adams said. “As citizens, they should expect the same. Our goal is to connect people to government at all levels through transparency and genuine opportunities for participation.”

“With each adjustment to tax and spending categories, users instantly see the near-term and long-term impact on balancing ? or not balancing – the nation’s budget,” Hoagland said.

BPC and Engaged Public will report regularly on what is learned about public preferences from the simulator.

Engaged Public
Engaged Public is a Denver-based, boutique public engagement firm that develops strategies for solving problems, working with civic leaders, stakeholders, and the public. Engaged Public is also the creator of civic engagement apps Balancing Act, an interactive budget simulation tool for learning about public budgets, and the Taxpayer Receipt, a breakdown of taxes paid. To learn more visit us at EngagedPublic.com, on Facebook, or on Twitter.