Washington, DC — The Bipartisan Policy Center has updated its forecast and now projects that the debt limit “X Date”—when the U.S. will no longer be able to meet all its obligations in full and on time—will most likely arrive between October 19 and November 2. Today’s update narrows BPC’s previous projection of October 15 to November 4.

“If we are to avoid crossing the Rubicon, Congress must act before, not on, the X Date to ensure the full faith and credit of the United States,” said Shai Akabas, BPC’s director of economic policy. “Even leading up to October 19, the Treasury Department will find itself with dangerously low cash levels. An unexpected event during that time frame could escalate into a financial crisis.”

Failing to act in the coming days to address the debt limit would be unprecedented and could yield significant economic consequences. The impact of debt limit brinkmanship has already drawn the attention of credit rating agencies, which have indicated they may downgrade the United States.

Interest rates on short-term Treasury securities that mature near BPC’s X-Date range have started to rise, demonstrating a degree of concern in the market. The financial and economic risks will only heighten as the debt limit impasse drags on. Taxpayers could face increased interest rates on everyday expenses, from mortgage payments to consumer loans.

“There could be an immediate impact on everyday Americans,” said Akabas. “Even briefly crossing the X Date could precipitate a stock market plunge, wiping out trillions of dollars in 401(k)s and other savings. A prolonged debt limit stalemate would likely lead to an economic contraction and increased unemployment, derailing the nation’s recovery from the COVID-19 pandemic.”

How the Treasury Department would operate in a post-X-Date environment is unknown. One scenario would attempt to prioritize certain types of payments over others. Another would delay all payments for a given day until there was enough revenue deposited to pay them in full. Under any scenario, priority would likely be given to principal and interest on the public debt, but legal and other risks loom large.

Households and business owners who rely on regular payments from the federal government—from unemployment benefits to Medicare and Medicaid provider payments, to military and federal salaries and veterans benefits—could also face serious income shocks if checks are missed or delayed. Such delays would grow over time and could last days or weeks depending on the duration of a debt limit standoff.

For illustrative purposes, if the X Date occurred on October 19, delays could include:

A further complicating factor is that the Treasury Department will need to pay back investors for the principal and interest due on approximately $400 billion of maturing Treasury securities in late October, the costs of which are usually covered by the country’s ability to attract new buyers. In an environment of heightened uncertainty and waning faith in the creditworthiness of the United States, however, these auctions may not go smoothly.

By the end of September, the Treasury Department had already utilized roughly half of these extraordinary measures, with approximately $173 billion remaining. Much of the balance was deployed on October 1, as Treasury faced a $77 billion cash flow deficit along with a comparably sized payment to a military retirement trust fund (see X Date chart below). After its remaining measures and cash on hand are fully exhausted, the United States would cross the X Date and find itself reliant on daily incoming revenues, which on most days are insufficient to pay all bills in full.

It is impossible to precisely determine when the X Date will arrive, and the COVID-19 pandemic and economic recovery have further increased uncertainty around estimates this year. BPC continues to closely monitor the Treasury Department’s daily cash flows and ongoing negotiations on Capitol Hill, and will update its projection as warranted. 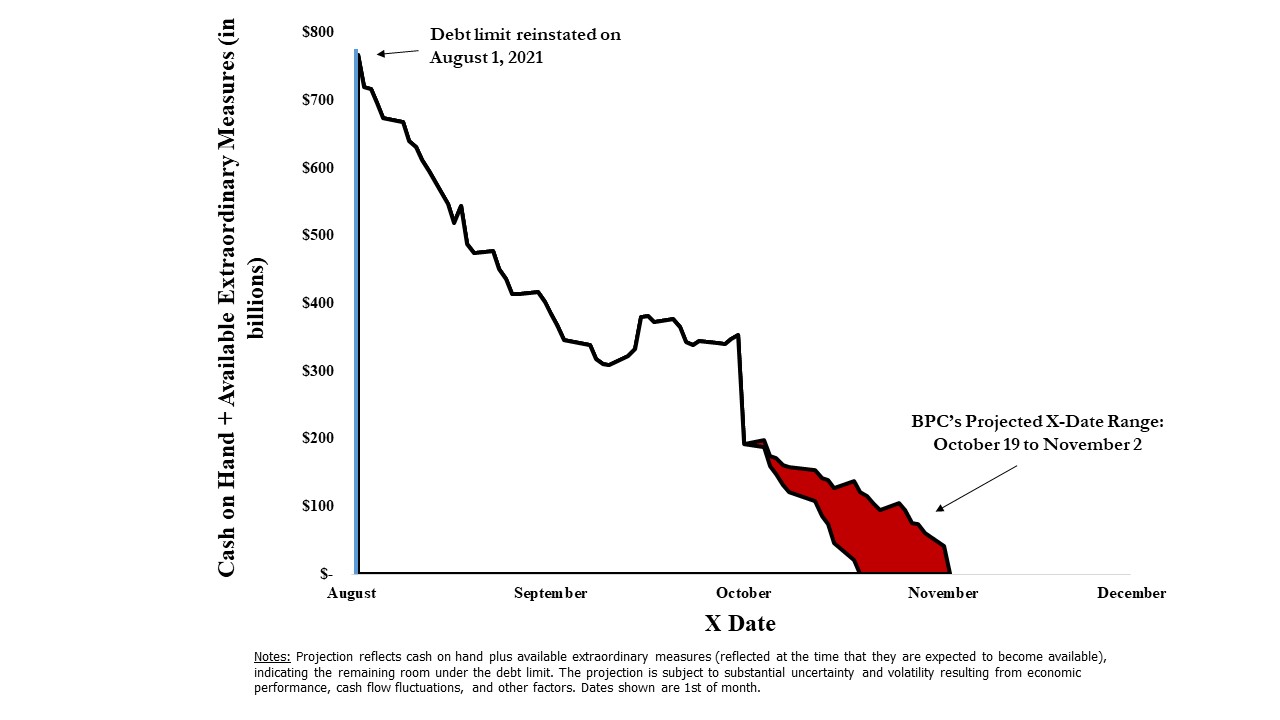