How have modern technologies and the latest innovations shaped our lives, economy, and politics? Here, BPC’s technology project shares predictions and analysis on trends, developments, and disruptions that may catalyze significant impact on the US policy framework. If you have questions or thoughts about any technology explored here, please reach out and click here stay up to date with BPC’s Technology Project.

The frequency of extreme weather events is on the rise, prompting the need for more advanced tools to prepare for emergencies. Traditional large computer simulators used to forecast the weather are not strong predictors of imminent weather changes such as a storm making landfall over the next hour. Instead, they predict forward-looking patterns over the next day or week. New AI technology is being developed to look for movements in the atmosphere that signal storms up to 90 minutes before they arrive. This level of precision will help emergency services plan ahead, pilots prepare for flights, and large outdoor gatherings take shelter when necessary.

U.S. National Center for Atmospheric Research (NCAR) is also driving forward research to better understand winter storms that are dangerous and damaging to U.S. infrastructure. Using neural networks, forecasts can associate many more factors, such as wind speed, surface pressure, and location, all at once to calculate the probability of a storm that produces hail or tornadoes. Hail annually causes about $8 billion to $10 billion in damages in the U.S. alone. An advanced warning could help preparedness efforts and relieve many of those costs.

Smart wearable technology is typically considered anything a consumer wears that has its own processing power to connect to the internet. Wearable technology can be worn from head to toe, such as headphones, watches, or smart footwear. The industry is experiencing rapid growth, both from new entrants and consumer demand. One report found the smart wearables market was valued at $14 billion in 2020 and is expected to grow 2.5 times that amount by 2026. But with every emerging technology, there is the possibility new legal or policy concerns could arise. Wearable technology companies will need to be ready to address new industry specific issues too, from inclusivity of the technology’s design for those with disabilities, to the security of personal information stored on devices.

Breakthroughs occur every day in quantum computing that could transform medicine, create ultra-secure encryptions, revolutionize communications, and advance artificial intelligence technology. Companies like IBM, Microsoft, and Google are racing to build reliable quantum computers. Unlocking powerful quantum computers can lead to great technological advancements, but it can also have serious ramifications, such as new abilities to break advanced encryptions. The technology could be used to crack the code of large volumes of sensitive data, potentially creating a major national security risk.

Quantum computing can also transform major parts of our lives. For instance, the distribution and consumption of utilities like energy and water could be optimized using quantum calculations. Renovations to power grids, for example, will reduce costs and waste in the energy sector. Another transformative area is climate change and weather prediction technology. Quantum computers are being used to provide insights into the causes of climate change to help identify and mitigate these impacts. The benefits of quantum computers are expansive, and innovation to realize them requires industry, research, and government support. These topics were discussed at the World Economic Forum’s Global Technology Governance Summit. 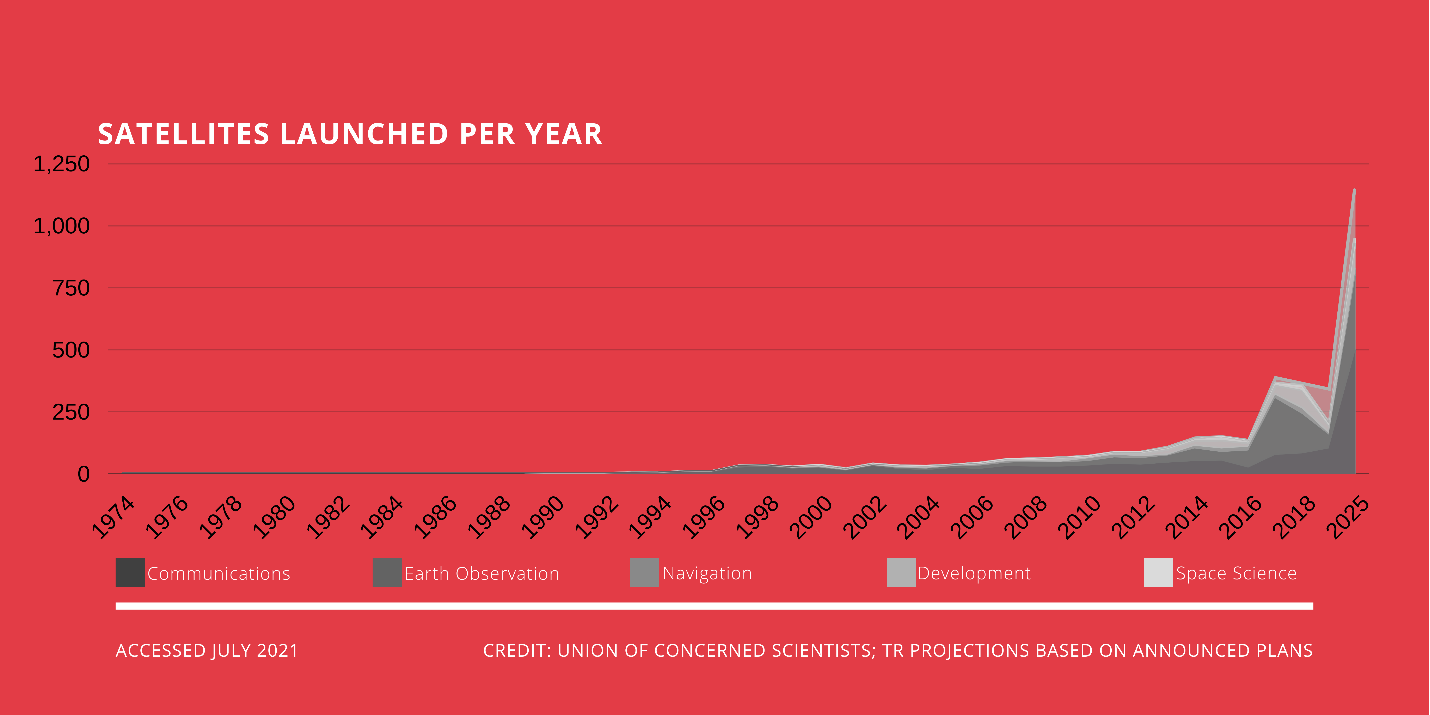 Astrodynamacist Dr. Moriba Jah discovered a way to track objects in low earth orbit (LEO) and found vast amounts of debris in our skies. In 1957, there was one satellite in space, Sputnik. Today, he explained, we track 30,000 objects circling our skies. With so many objects, collisions are common, and collisions create debris. Without shared protocols or a standard set of rules for active or inactive objects in space, more collisions will occur. Today, he estimates 2,000 inactive rockets are floating around in space with no plan for reentry or obliteration. Who should lead the charge to create and coordinate international rules for our skies? These are the questions policymakers need to answer, fast. Listen to Neil deGrasse Tyson discuss space junk on StarTalk Radio.

Particularly for insurers, this level of debris makes it difficult to insure collision coverage for LEO satellites. However, this concern is speculative as likely only 11 spacecraft collisions have resulted in partial or total failure, according to Seradata, a satellite database and space market analysis system. Still, without common standards for removing debris, skeptics’ predictions may become real collisions in the near future. Read more about the collision problem and why insurers are hesitant to invest in Reuters.

Some private companies have launched initiatives to clean up the mess in space. Researchers have been exploring several ways to capture space debris – from harpoons, to nets, to magnetic fields. Today, companies plan to put their technology to the test. From Japan to the U.S., startups are taking advantage of this potentially lucrative new business, but it will take a great deal of funding to literally get these companies off the ground. Because orbiting objects and debris move around the entire globe, not just the country they’re maintained by, cooperation between nations is essential and international bodies must be ready to tackle the growing hazards in our skies.

Whether they are in the form of a car, bus, delivery robot, or truck, autonomous vehicles (AVs) are taking to the streets. Many local officials are eyeing AVs for their city’s future because of positive returns on investments like reduced carbon emissions, less congestion, new revenue streams for public transportation, and economic opportunities for communities. In 2018, BPC called for regulations and protections for this emerging technology, but today, cities must also consider the shifting behaviors of people after a year of city to suburban outflow and public transport use reduction. Read more by Harvard Kennedy School researchers Mark Fagan, Daniel Comeaux, and Benjamin Gillies.

One challenge keeping autonomous vehicles off the streets today, is safety, for riders, operators, and pedestrians. Accidents on the road that occur with AVs, however unlikely, make people cautious of the technology. One of the AV buses featured at the Tokyo Paralympics Games, providing transportation for athletes, got in an accident with a pedestrian, Reuters reported. It was then required to operate with additional safety staff to ensure no similar accidents occurred. Extra safety measures like this can temporarily be put in place to promote trust in AVs until their reputation is improved, but additional research, testing, transparency, and communication is needed to be entrusted by communities looking to adopt this technology.

Researchers discover batteries powered from new sources with new structural designs to upgrade the dated lithium-ion battery technology we have relied upon for decades. Seawater, sand, sound waves, and several other new materials will eventually fuel our electric vehicles, smartphones, and other devices. These battery technologies are more efficient at charging and staying charged, sustainable to source and produce, and hold more energy to power advanced technologies. Learn more about the future of batteries here.

While new materials are still in the development phase, demand for traditional battery metals and minerals like lithium, nickel, cobalt, and graphite is growing exponentially. Some startups are trying to meet this demand by accelerating the mining processes in an environmentally conscious way. One company for example, is investing in AI for to examine hundreds of miles of recorded electromagnetic signals to determine precisely where these rare minerals are located. Conventionally, geologists would analyze large collections of field data to determine where to dig next, but as minerals become scarcer, these methods are discovering raw material less frequently. Machine learning is making it possible to quickly sift through data sets containing information on the geology, geochemistry, and geophysics of the land and spot patterns unnoticeable to human eyes. It is also using AI technology to determine if a particular ore deposit has high concentration of the wanted metals. Read more about the companies leading the clean mining industry in MIT Technology Review.

Data is coming to life through new CRISPR technology that can encode and store digital information in living cells. CRISPR can convert binary data, used in everyday computers, into DNA sequences that are then stored within living bacteria cells. Researchers have already proven this technology works by encoding a 12-byte text message saying, “hello world!” in a cell and then extracting that information later. Cells offer a surprisingly safe, long-term storage unit for encoded DNA and could be the future of data storage. Read more here.