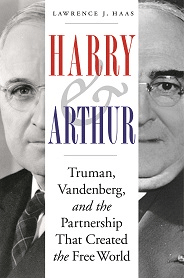 With Franklin Roosevelt’s death in April of 1945, Vice President Harry Truman and Sen. Arthur Vandenberg, the Republican leader on foreign policy, inherited a world in turmoil. With Europe flattened and the Soviets emerging as America’s new adversary, Truman and Vandenberg built a tight partnership to address the challenges at hand.

These two men?unlikely partners by way of personality and style?worked in strong bipartisan fashion at a bitterly partisan time, crafting a dramatic new foreign policy through which the United States stepped boldly onto the world stage for the first time to protect its friends, confront its enemies, and promote freedom. Through their leadership, the United States spearheaded the birth of the United Nations; pledged through the Truman Doctrine to defend freedom from Communist threats virtually anywhere in the world; rescued Western Europe’s economy through the Marshall Plan; and committed through the North Atlantic Treaty to defend Western Europe if the Soviets attacked.
Harry and Arthur: Truman, Vandenberg, and the Partnership That Created the Free World
is their story.

The Bipartisan Policy Center hosted a book signing reception in celebration of the publication of Harry and Arthur with the book’s author, Larry Haas.

Once Upon an American Dream: Arrival - Navigating the System Then and Now