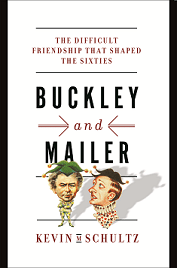 Buckley and Mailer: The Difficult Friendship that Shaped the Sixties

William F. Buckley, Jr., and Norman Mailer were the two towering intellectual figures of the 1960s, and they lived remarkably parallel lives. Both became best-selling authors in their twenties (with God and Man at Yale and The Naked and the Dead); both started hugely influential papers (National Review and the Village Voice); both ran for mayor of New York City; both were noted for their exceptional wit and venom; and both became the figurehead of their respective social movements (Buckley on the right, Mailer on the left). Indeed, Buckley and Mailer argued vociferously and publicly about every major issue of their time: civil rights, feminism, the counterculture, Vietnam, the Cold War. But behind the scenes, the two were close friends and trusted confidantes. In Buckley and Mailer, historian Kevin M. Schultz delves into their personal archives to tell the rich story of their friendship, their arguments, and the tumultuous decade they did so much to shape.

Your Personal Finances During COVID-19

Telehealth and COVID-19 in Rural Areas