Fearing a Republican interception, President Obama decided not even to attempt the long pass, but instead simply opted, as The Washington Post put it, to punt. The president’s budget shies away from addressing the major causes of America’s perilous fiscal situation: entitlement growth, particularly in Medicare and Medicaid, and a tax system that is overly complex and does not raise sufficient revenue to support the retiring baby boom generation and rising health care costs. Perhaps Obama calculated correctly that Republicans would just use an ambitious budget to attack him politically, rather than engage in a bipartisan debate on the reforms necessary to rein in America’s debt.

Instead, the president proposes a piecemeal approach that ends or limits some tax expenditures and freezes non-security discretionary spending (which constitutes a mere 12% of the budget) for five years. The president’s budget does also include a minor restraint of the defense budget, even milder cuts to Medicare and Medicaid, and a gas tax under the guise of “bipartisan funding for transportation,” but the big culprits are by and large left untouched.

Using CBO economic growth assumptions and a more realistic baseline, President Obama’s budget still grows the debt from 69% of the economy in 2011 to 85% by 2021 ? higher even than CBO’s current law baseline projections, which reflect the results of a completely inactive Congress that just went home and let programs currently scheduled to expire run their course (the largest of which is the Bush tax cuts). Taken together, the proposed policies in President Obama’s budget achieve only one-third of the savings necessary to stabilize the debt at 60% of GDP ? an internationally recognized standard ? within ten years. Moreover, as you can see from the graph, debt accumulation accelerates to an even more unsustainable track after the first ten years. 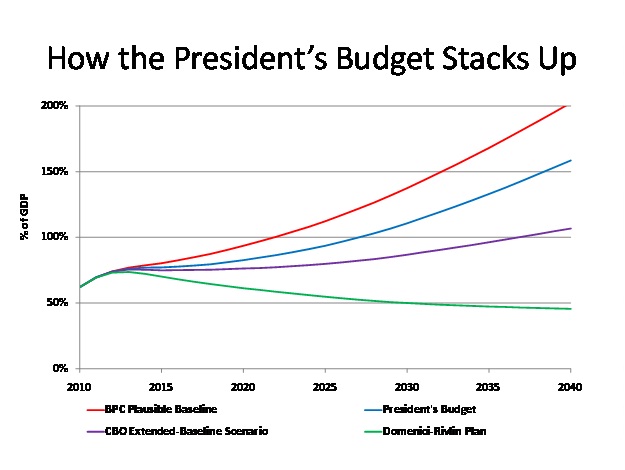 House Republicans also need to refocus their efforts to truly address our runaway debt. Even if the entire non-security discretionary budget was eliminated tomorrow ? everything from education funding to the FBI to food safety inspectors ? debt would still expand to almost 80% of the economy by 2021 and continue to climb rapidly thereafter. The president and Congress, as our Steve Bell declared, need to stop fighting about a mere 12% of the budget.

Solutions that address the real drivers of U.S. debt are out there. Both the Bipartisan Policy Center’s Debt Reduction Task Force and the Bowles-Simpson Fiscal Commission laid out comprehensive plans that would stabilize the debt at 60% of GDP by tackling the three biggest entitlement programs ? Medicare, Medicaid, and Social Security ? and fundamentally reforming the tax code to make it simpler and more pro-growth, while also raising more revenue.

Our nation’s mounting debt is the single biggest challenge facing this Administration, and solving it will require fearless leadership, big ideas, and immediate calls to action. This president possesses both the talent and capacity to face down seemingly insurmountable odds to accomplish great things. We hope the president uses these skills to tackle the debt and deficit issue.