One narrative gaining traction is that the sequester of defense and non-defense discretionary spending for Fiscal Year 2013 has been much less damaging to the economy and to jobs than had been forecast. In fact, some have gone so far as to say that it is having no damaging effect at all.

As noted in one of our earliest posts on the economic impact of the sequester, we believed that it could result in as many as 750,000-1,000,000 jobs lost in 2013 and 2014 . The Congressional Budget Office predicted similar job losses and recently projected reduced gross domestic product in 2014 of about 0.7 percent as a result of sequestration.

When the “the sequester didn’t hurt” theme began, we agreed that it had not hurt ? yet. Our view was similar to that of Jim McNerney, CEO of Boeing, who noted last week that the firm was not out of the woods (with respect to the defense sequester’s impact), but was just now “entering the woods.”

The New York Times economic reporter, Catherine Rampell, analyzed the July jobs report released today; her analysis is the clearest demonstration of the sequester’s economic impact for this year. Below is the chart that Rampell used in her analysis, showing the large direct impact that the furloughs, which began on a widespread basis in June, have had on involuntary part-time employment: 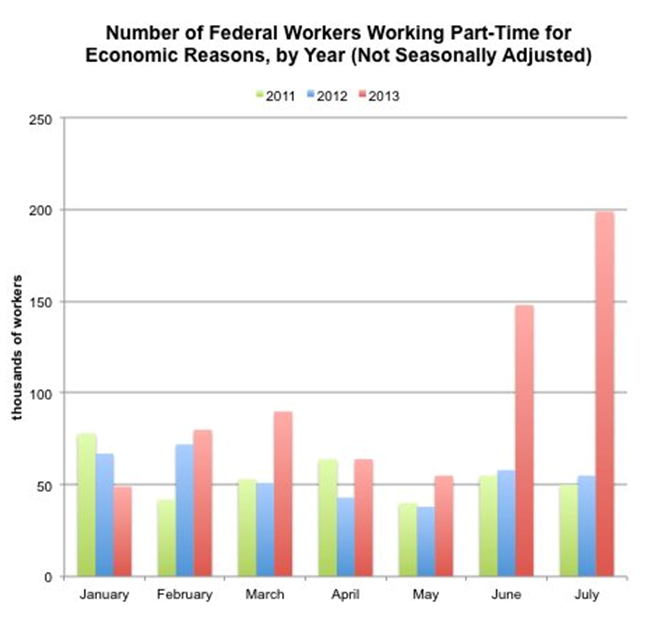 While we only have anecdotal evidence thus far of the impact of sequestration on private-sector businesses and workers, we still hold to our belief that real job losses (not just furloughs) in small- and medium-sized businesses have already begun and will continue to show up beneath the topline numbers in future monthly jobs reports.

The sequester’s impact on the economy, however, is not the same as the impact of failing to fund the government when appropriations bills do not pass Congress. In the absence of appropriations, history reveals that nearly 80 percent of the federal government’s day-to-day activity goes dark the morning after the appropriations expire. In contrast, the sequester resembles that famous metaphor used on many occasions: it’s like cooking a frog by putting it in a pan of cool water and gradually increasing the heat beneath the pan.

In short, it may take longer and we may not notice it at first, but in the end, it hurts at least as much.