The Bipartisan Policy Center (BPC) recently released a debt limit report projecting that if the debt limit is not increased, the federal government will likely have insufficient cash to pay all of its bills in full and on time (what we call the “X Date”) at some point in the range of February 15 through March 1, 2013. The BPC estimate was based on certain assumptions, including that the tax filing and refund payment processes do not experience major delays. Because tax refunds make up a substantial portion of cash outflow in February, a significant delay to either the tax filing season in general or the refund payment process in particular could result in a later X Date.

The Internal Revenue Service (IRS) recently announced that the 2013 tax filing season will start on January 30 for most taxpayers, about a week after the planned start date of January 22. The key question now is whether the announced delay in the tax filing season would affect the X Date by a sufficient magnitude to revise our projection. BPC’s evaluation is that the late filing season start date might make the X Date more likely to fall in the latter part of our projected window of February 15 through March 1, but by itself, this short delay is unlikely to cause the X Date to occur later than March 1. A detailed explanation of our analysis follows.

Why is the filing season delayed this year?

The delay in the 2013 filing season is a result of last-minute tax changes signed into law on New Year’s Day as part of the fiscal cliff deal. Many of these policies affect returns for tax year 2012, including indexing the Alternative Minimum Tax (AMT) for inflation and extending commonly used tax breaks for state and local sales taxes and education expenses. IRS needs time to finalize forms and update and test its computer systems to correctly process these returns. Some filers with very complex returns will have to wait until later in February or March to file, but these taxpayers tend to file closer to the April 15 deadline (or obtain an extension) anyway.

The situation for this year is similar to what happened in 2011, when Congress waited until December 2010 to patch the AMT and extend several popular deductions. In 2011, the tax filing season technically opened on time (January 14), but anyone itemizing deductions had to wait until February 14 to file because IRS required time to update its systems. This year, although non-itemizers won’t be able to file as early in January, most itemizers will be able to file from the beginning of the season. So, depending on one’s filing status, the January 30 start date is either an improvement or a delay from the situation two years ago.

Last year’s filing season also got off to a rough start, but for a different reason. In 2012, IRS introduced a new computer system to speed up processing of most tax returns while implementing more sophisticated anti-fraud measures. The filing season did start on time ? on January 17 ? but the anti-fraud software was not properly tuned and selected far too many returns for manual review. The result was that many early filers experienced delays in receiving their refunds.

How will the filing season delay affect the timing of refunds?

The delay in the filing season means that some refunds will be paid later in 2013 than they were in previous years. For example, in January 2011, almost $13 billion of refunds were paid to individual taxpayers; in January 2012, $7 billion of individual refunds were issued. Since IRS takes at least a week to issue refunds (many are issued within 10 days, and 90 percent have traditionally been issued within 21 days), BPC does not expect that any refunds for tax year 2012 will be issued in January 2013.

February is a major month for tax refunds. The late start to the 2013 filing season probably means that fewer than normal refunds will be paid in the first full week of February. But that does not guarantee that the total refunds issued for the month will be significantly lower than in previous years. Refund volume may be higher than normal in the second and third full weeks of February (February 11 through February 22) as the combination of taxpayers who would traditionally have filed earlier in January and taxpayers who normally file in early February all file together towards the beginning of the month.

IRS refund processing may be delayed as a result of this elevated filing volume in early February. The IRS has made significant investments in speeding processing time, however, so delays might be minor. For 2013, the IRS has upgraded its “Where’s My Refund” information tool. This year, the tool will provide a personalized refund date once each return has been processed and the refund approved; in previous years, an estimated range was given.

Minor delays in refund processing could affect the total volume of refunds paid by the beginning of the BPC X-Date window (February 15). Thus, the late start to the tax filing season could result in the X Date occurring later within the window, but since any backlog from the late start to the filing season would likely be cleared by the end of February, our latest plausible estimate for the X Date remains March 1.

As the table below shows, refunds over the past two seasons have been paid out at varying rates throughout the tax filing season, but by the end of February the running total was over $100 billion in both cases. 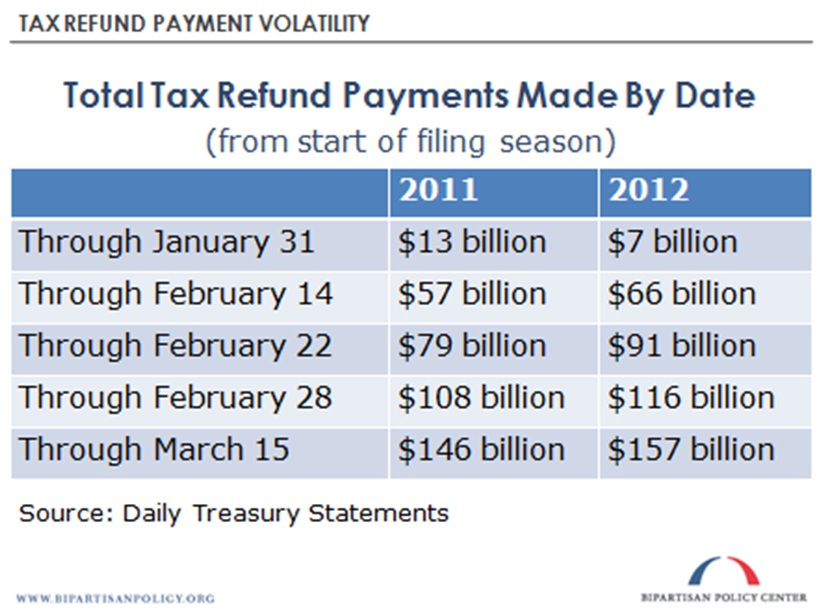 Tax refunds continue to be a wild card for the BPC estimate. If there are major delays in refund payments for any reason, it certainly could change our projected X-Date window. We will continue to monitor the situation and update our estimates accordingly.

644
14423
645
The filing season will start on January 30 for most taxpayers, about a week after the planned start date