Federal Reserve Board Chair Janet Yellen and Governor Daniel Tarullo this week proposed major changes to the Fed’s stress testing regime, which annually reviews the ability of the largest U.S. banks to withstand hypothetical stress scenarios. (This year, the Fed evaluated 33 firms.) The proposal came following a review of the stress testing program the Fed began last year. The most obvious effect of the proposal will be to raise the regulatory burden on the eight most systemically important U.S. banks, especially compared to the large regional banks. In addition, the Fed’s internal models will play an even bigger role in the outcome of future stress tests.

As part of its Comprehensive Capital Assessment and Review (CCAR) program, the Federal Reserve uses internal models to project losses, revenues, and balances for each bank holding company with at least $50 billion in assets in a hypothetical stress scenario. The Fed then calculates the firm’s minimum capital ratio (taking into account the firm’s planned capital actions) over the stressed horizon, and compares that ratio to the Fed’s minimum required ratio. If the bank falls below the minimum, it “fails” the test and faces restrictions on its capital actions, including paying dividends and buying back its own stock.

Four takeaways from the proposal:

Under the proposal, minimum capital requirements on the eight globally systemically important banks, or G-SIBs, will jump significantly. Most importantly for the big banks: the proposed new minimum will include the G-SIB surcharge, the extra buffer mandated by the Fed that is designed to ensure that the largest firms bear the costs that their failure would impose on the rest of the financial system. The surcharge affects only the G-SIBs and currently ranges from 1 percent to 3.5 percent. Until now, though, the Fed has not included the surcharge in the CCAR minimum.

The Fed will also include two additional capital buffers in the minimum ratio. The first is a new, firm-specific stress capital buffer that will be based on each firm’s prior-year stress test results, and will add a minimum of 2.5 percent to the G-SIBs’ capital requirements. Second is the countercyclical capital buffer, which is currently set to zero, and is designed to be raised in periods of elevated financial risk, and generally affects firms over $250 billion.

The proposal would decrease capital requirements by no longer assuming that banks would increase the size of their balance sheets during a stress event.

The Fed plans to offset some of the proposed increase in capital requirements by relaxing certain stress test assumptions. Under the current rules, the Fed assumes that banks will maintain their planned dividend payments and share repurchases through both years of the hypothetical stress scenario. Banks have to have sufficient capital to keep all of their planned capital actions despite stressed losses. Under the proposal, the Fed plans to assume that banks will pay only the first year’s dividends, and can decrease first-year repurchases. That will lower their capital requirement.

The proposal would also decrease capital requirements by no longer assuming that banks would increase the size of their balance sheets during a stress event, as the stress tests do now. Instead, the Fed will assume risk-weighted assets and balance sheet sizes will remain constant.

The non G-SIB banks that take part in CCAR will see a decrease in their capital requirements relative to current minimums, and should face lower compliance costs. These medium-sized banks will face higher capital ratio minimums because they will be subject to the stressed capital buffer. However, they will also benefit from the full offsets described above, will not be subject to the G-SIB surcharge, and most will not be subject to the countercyclical capital buffer if it were ever turned on. The Fed projects that the net effect of the proposed quantitative changes will result in “some reduction in post-stress capital requirements” for these firms.

Medium-sized firms with assets of $250 billion or less would no longer face the threats of restrictions on their capital actions or the risk of a public “failing” on qualitative grounds.

Another benefit in the proposal for the medium-sized firms is the general exemption of banks with assets of $250 billion or less from the qualitative portion of CCAR. In the qualitative portion, the Fed evaluates how a firm runs its internal stress testing and capital planning systems. The regulators will instead evaluate firms’ capital planning processes under the normal supervisory system. Such firms will no longer face the threats of restrictions on their capital actions or the risk of a public “failing” on qualitative grounds. (The Fed maintained the right to subject firms with less than $250 billion in assets to the qualitative review if they have significant foreign or complex exposures.) The Fed will also simplify the data reporting requirements for these firms, further decreasing compliance costs.

Yellen and Tarullo referenced the Fed’s focus on tailoring bank regulation for the G-SIBs versus the less complex firms. This is in line with BPC recommendations, including one to increase the so-called “bank SIFI” threshold from $50 billion to $250 billion, but also give regulators discretion to include riskier firms under that threshold, and to exempt less-risky firms over that threshold. Such discretion helps somewhat to avoid cases where passing an asset threshold suddenly subjects banks to a significant jump in regulatory requirements (see BPC’s latest paper on post financial crisis regulation). 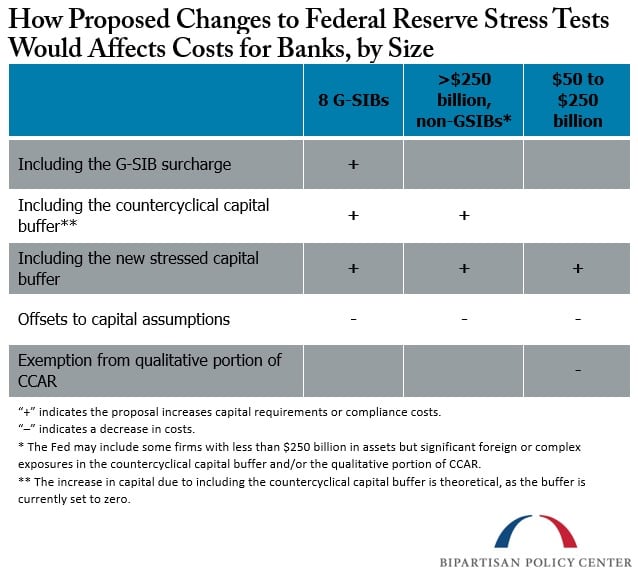 3. The Fed’s internal models will be even more important.

The Fed’s internal models will take on greater weight in the outcome of the stress tests. The Fed currently uses its models to project how each bank performs in the stressed scenario. Under the proposal, the Fed will also use its models to set the minimum threshold each bank must meet. The new stressed capital buffer will be based on the firm’s projected losses and revenues from the prior year’s stress test. Firms with riskier assets, according to the Fed’s models, will therefore face higher minimum capital ratios in addition to higher losses.

Increased reliance on the Fed’s models also might prove controversial because banks have pushed for more transparency in those models. Some have argued that the opacity of the Fed’s models might be illegal under the Administrative Procedures Act since it does not allow the public to assess or provide comment on unpublished models. House Financial Services Committee Chairman Jeb Hensarling’s (R-TX) proposed Financial CHOICE Act would mandate that the Fed publish its models.

The Fed will not release the full computer code for its models, believing that such disclosure would lead to gaming by the firms.

Tarullo announced the Fed may provide more information about its models, such as publishing more granular revenue items, disclosing summarized changes to models earlier, and giving more information about its internal model validation system. The Fed will continue to publish descriptions of its models, including what scenario variables and risk drivers are used, and hold its annual modeling conference with the industry. However, Tarullo affirmed that the Fed will not release the full computer code for the supervisory models, believing that such disclosure would lead to gaming by the firms, and to a “model monoculture” where all firms used the Fed’s models rather than developing their own.

Despite the changes outlined this week, the Fed has only issued a proposed rule change to exempt banks with under $250 billion in assets from the qualitative portion of CCAR. That change, according to Tarullo, will come into effect for the next cycle of CCAR in 2017. All of the quantitative changes, the inclusion of the new buffers as well as the offsets, have not been formally proposed in rulemakings, let alone finalized or included in CCAR. Tarullo said the earliest the Fed would propose those rules would be next year. Those changes will not come into effect for at least one more cycle of CCAR, and possibly longer. That leaves time for banks, the public, Congress, and the next president, who will have the opportunity to fill at least two vacancies on the Federal Reserve Board and also choose its next chair, to weigh in.

What’s the Best Way to Resolve a Global Bank?