The Financial Stability Oversight Council (FSOC) will meet on Thursday, December 18 in both closed and open sessions. On the agenda for the FSOC’s final scheduled 2014 meeting is a closed-session vote on whether to designate MetLife as a systemically important financial institution (SIFI). During the open session, the FSOC will receive several progress reports on its efforts to monitor and mitigate threats to financial stability.

Here’s what we’ll be watching for:

1) Will the FSOC designate MetLife as a SIFI, and if so, what will be the response?

If designated, MetLife would join AIG and Prudential Financial as the third insurance company to become a SIFI, underscoring the Council’s focus on the risks to the broader financial system posed by major players in the sector. (The Council has also designated one other company, GE Capital, as a SIFI, as well as eight financial market utilities.) SIFIs face enhanced prudential standards, and regulation and supervision by the Federal Reserve. For insurance companies, this means federal oversight in addition to state regulation. Designating MetLife would also cause the list of U.S. insurance companies designated as SIFIs to align with the Financial Stability Board’s (FSB) list of global systemically important insurers headquartered in the U.S.1

On September 4, after evaluating MetLife, the FSOC proposed to designate the company as a SIFI. MetLife appealed the decision and made its case at a closed-door, oral hearing on November 3 before the same FSOC members that had voted for the proposed designation. At Thursday’s meeting, members of the FSOC are expected to cast their final vote on whether or not to designate the company as a SIFI. However, the FSOC is unlikely to announce a decision until Friday ? its rules do not allow it to make a formal announcement until one business day after the final vote.

Yet, Thursday’s vote may not be the final word in what has been a long and complex process. If the FSOC designates MetLife as a SIFI, the company will have 30 days from when it receives notification from the FSOC to request judicial review of the decision. An appeal would face a high legal bar to overturn the FSOC’s decision?the district court that would hear the case could only rescind the designation if it finds that the FSOC’s decision was arbitrary and capricious. This dynamic is untested since, to date, no SIFI has requested such judicial review. However, Eugene Scalia, a prominent appellate lawyer, earlier this year previewed a possible line of argument for a judicial challenge when he testified before Congress:

[W]hile Dodd-Frank does not expressly require FSOC to conduct cost-benefit analyses in its designation decisions, it would be arbitrary and capricious for FSOC to select a financial institution for heightened oversight based on predicted economic behavior and financial consequences, without a sound economic analysis to support its forecasts of market behaviors and financial effects.2

MetLife has announced that it has hired Scalia.3

2) How will the Federal Reserve respond to being given clear authority to tailor insurance standards by Congress?

As a result of Dodd-Frank, the Federal Reserve already has regulatory responsibility over a host of insurance companies. According to prior BPC research, the Fed now oversees up to one-third of the life insurance industry and one-quarter of the property and casualty industry. This is because the Fed has regulatory authority of both designated SIFI insurers as well as insurance companies that own a thrift, such as Nationwide, Mutual of Omaha and State Farm.

Until last week, insurers faced being shoehorned into capital requirements that were designed for banks, which have very different business models. This was due to the so-called “Collins Amendment” to Dodd-Frank that imposed minimum capital rules for all banks, which the Fed interpreted as extending to any insurance company it regulated.4 When the House last week passed a bill previously passed by the Senate to clarify the Collins Amendment,5 Congress granted the Federal Reserve unambiguous authority to tailor capital requirements for insurance companies. This was a key recommendation of the Bipartisan Policy Center’s (BPC) recent report on systemic risk.6

Now, the question is how the Federal Reserve will translate this authority into action. The BPC’s systemic risk report urged the Fed to tailor its regulation and supervision of the non-banks it oversees, avoiding a bank-centric approach. In late September, Fed staff embarked on a so-called “quantitative impact study” that is surveying major insurers to get a baseline understanding of the industry’s capital levels.7 The Fed asked insurance companies to submit information to the agency by the end of this year. It is unclear how long this process may take, but if the Basel rule-writing process is a benchmark, it could take years before regulators identify the appropriate standard for insurers ? and even longer before compliance is required.

The FSOC has faced criticism from lawmakers, regulators, academics and other policy experts to increase its transparency with the public, as well as with companies under consideration for designation. BPC echoed some of these concerns in our regulatory architecture and systemic risk reports. Recently, the Government Accountability Office (GAO) weighed in on the debate with a report on how the FSOC could improve its designation process, including the development of a formal process to gather non-public, early stage evaluation data and several measures the FSOC could take to strengthen communications with the companies and the public.

The FSOC has responded to this criticism by publicly announcing that it would examine ways to improve its communication. According to minutes of the October 6 FSOC meeting, Treasury Secretary Jack Lew, who is the FSOC’s chairman, said that the FSOC is “committed to improving its effectiveness and engaging with the public,” and that the FSOC will “consider possible changes to its [designations] process.”8 As part of this internal examination, the FSOC’s Deputies Committee recently held a series of panel discussions on this process with industry participants, financial reform advocates and think tanks?including the Bipartisan Policy Center.9 Participants focused on potential changes to the FSOC’s process in three areas: public transparency, engagement with companies under review for possible designation and the annual re-evaluation process for SIFIs.

At the October FSOC principals meeting, Secretary Lew asked the Council to report back with ideas for additional reforms,10 a move that could harness some of this feedback. Given the full end-of year agenda, BPC expects the Council to wait until early next year before announcing any formal changes. However, FSOC members may choose to discuss some of the alternatives could at this meeting.

4) How will the FSOC implement its activities-based risk analysis of the asset management industry?

5) What kind of progress has the Council made in addressing financial stability risks and responding to changes in markets?

On December 1, the Office of Financial Research (OFR) released its annual report and updated its Financial Stability Monitor, a color-coded heat map of systemic risk.

Although the monitor shows risk as being roughly steady, the report highlighted several specific areas that saw an increased threat to financial stability over the past year: 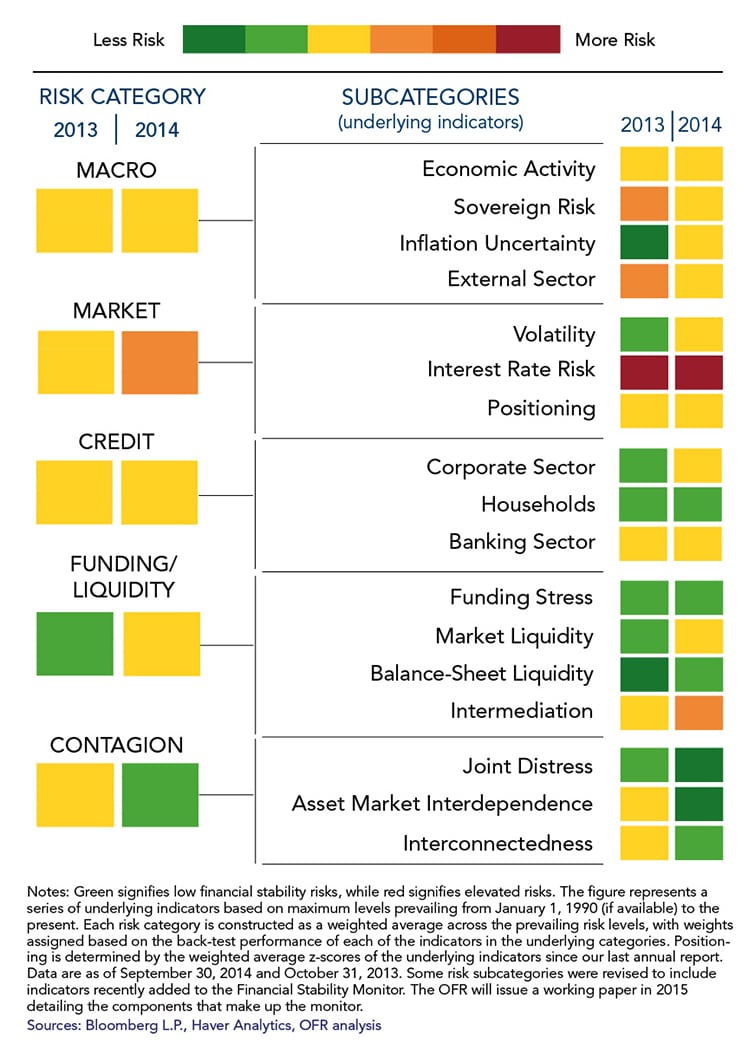 Given the heightened concerns about the Fed’s ability to smoothly transition from this unprecedented period of managing interest rates at the zero lower bound, we expect Council members to engage in a vigorous discussion over the potential impact to financial institutions when the Fed begins to raise rates. It will also be interesting to see if the FSOC mentions the sharp, unexpected drop in the price of oil and what impact, if any, that has on financial stability.

In addition, FSOC members will discuss progress on some of the recommendations included in its own 2014 annual report to mitigate systemic risk. For example, some notable milestones include an inaugural meeting in early December of the Financial and Banking Information Infrastructure Committee (FIIBC) principals, a group of senior financial regulators tasked with coordinating the federal response in the event of a significant cyber-attack. FSOC members may consider recent progress at the international level to improve the quality and consistency of financial data, such the OFR’s “Repo Data Project” with the Federal Reserve Bank of New York as well as the OFR’s work on legal entity identifier standards. FSOC members may also consider the recent proposal for an additional capital buffer to strengthen the Total Loss Absorption Capacity, or TLAC, of large global firms that was unveiled at the November G-20 Summit in Brisbane.

2
Statement of Eugene Scalia before the House Committee on Financial Services regarding the Financial Stability Oversight Council’s designation of systemically important nonbank financial companies, May 20, 2014, p. 5.

5 The Senate passed S. 2270, the Insurance Capital Standards Clarification Act, by a voice vote on June 3, 2014. The House passed the Senate bill without objection on December 10.

What to Watch for: The FSOC’s October 6 Meeting