On February 27, if Congress fails to pass an appropriations bill, the Department of Homeland Security (DHS) will be shutdown. Those wondering how a lapse in funding would affect the department need only look back to October 2013 when the entire federal government entered a 16-day shutdown over budget disputes. In preparation for a possible shutdown, DHS released their contingency plans and procedures for dealing with a lapse in federal funding. Presuming that the administration would treat a new lapse in DHS funding similarly, most of the department would continue to operate.

In the memo, DHS defined “exempt” personnel and functions that would continue operating during a shutdown as those:

The latter includes most of the U.S. Citizenship and Immigration Services (USCIS), the agency in charge of carrying out much of President Obama’s controversial deferred action programs.

Because so many of DHS’s operations fall into the “exempt category,” most of its personnel and functions would continue operating even if funding ceased, although paychecks would cease.1 During the last shutdown, 85 percent of the department’s workforce continued to work. The border remained staffed as 88 percent of Coast Guard and U.S. Customs and Border Protection (CBP) agents and employees remained on the job. Immigration enforcement activities such as deportations also continued, as Immigration and Customs Enforcement (ICE) operated at near-full capacity. The table below shows the impact of the shutdown on the seven largest components of DHS: 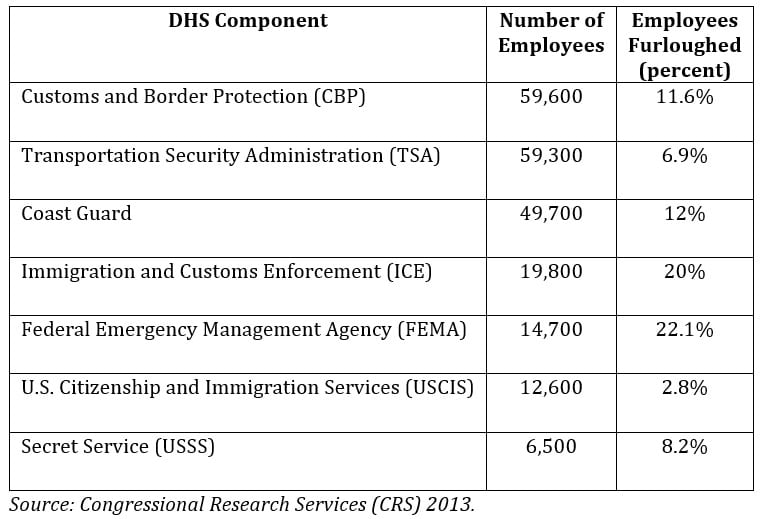 Some DHS services and programs, however, would be closed or cease to operate because of a lack of funds. These “non-exempt” functions would include anything to do with planning, research and development, policy functions, auditing, training and development, and legislative, regulatory, public affairs and intergovernmental affairs.2 The following are some of the specific programs or services that would cease to operate:

While speaking at the Wilson Center last week, DHS Secretary Jeh Johnson stated that a continuing resolution that limits the agency’s spending to last year’s levels would restrict its ability to expand existing programs or fund any new security initiatives. He added that, for example, they would be unable to hire additional Secret Service agents ahead of the 2016 presidential election cycle.

The Senate is scheduled to vote this Tuesday on a motion to proceed to the House passed DHS appropriations bill, H.R. 240, which includes the House passed amendments defunding the President’s executive actions on immigration. Democrats have vowed to oppose anything but a “clean” bill, and the President has threatened to veto any bill that rolls back his immigration actions.

1 Following past shutdowns, Congress has voted to retroactively pay federal workers for the days worked. However, such retroactive pay is not guaranteed and must be approved by Congress in legislation.