In the ongoing dialogue over the current child migration crisis, attention has recently focused on what happens to children after they are apprehended at the border. Several outlets have reported the number of children deported in recent years based on statistics from Immigration and Customs Enforcement (ICE). While an increasing number of children apprehended are under age 14,1 the Pew Research Center recently released data that showed that 84 percent of children apprehended so far in 2014 were teenagers.2 Because of long backlogs in the immigration court system, some of these teenagers will turn 18 before their removal. In order to get a clearer picture of how many apprehended minors are ultimately removed, these “age-out” cases should be included.

According to ICE data, between FY 2009 and FY 2013, about 4,600 children from Northern Triangle countries (El Salvador, Guatemala or Honduras) were removed; additionally, about 1,700 18-year olds were removed one or more fiscal years after their apprehension, and about 200 19-year olds were removed two or more fiscal years later, indicating they were likely to have been minors at the time of their apprehension. In total, these data suggest that the United States removed about 6,500 migrants from El Salvador, Guatemala, or Honduras who were apprehended as children. Overall, approximately 21,000 individuals apprehended as children were removed in the past five fiscal years. 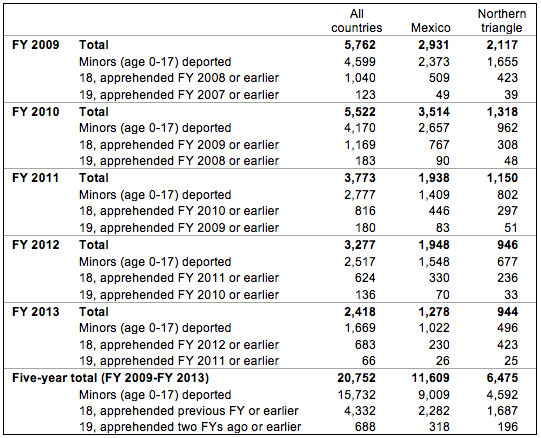 What about children who have not been removed? Data from the Transactional Records Clearinghouse (TRAC) suggest that most of these children are still awaiting their deportation hearing. As of June 2014, about 61 percent of the immigration court cases filed for Northern Triangle juveniles since FY 2009 were still pending, with much higher rates for recent years (Table 2, Figure 1). Another 24 percent have been ordered removed or granted a voluntary departure, and about 15 percent have been allowed to stay in the United States. 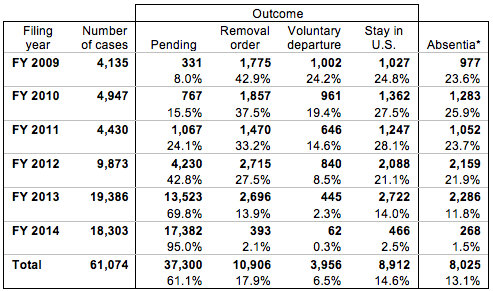 Source: TRAC
* About 99 percent of cases decided in absentia end in a removal order. 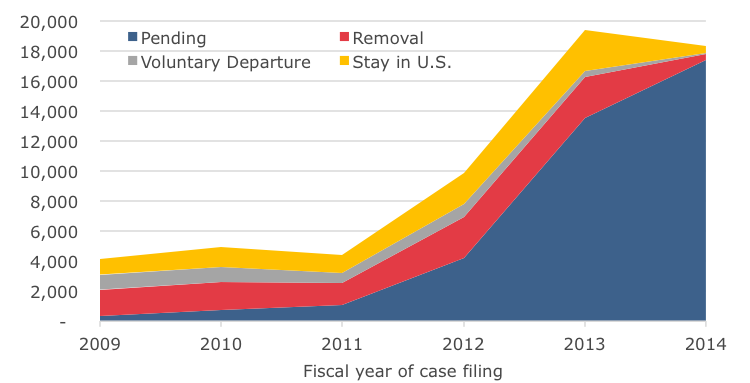 In absolute terms, these data show that between October 2009 and June 2014, a total of about 15,000 juvenile cases from the Northern Triangle resulted in a removal or voluntary departure order. By comparison, only about 6,500 juveniles from those countries were removed between October 2009 and September 2013, a difference of about 8,500. Several possibilities may explain this gap, including:

More detailed data from the Department of Homeland Security could paint a clearer picture of case outcomes for apprehended children, including the subgroup of those children who are classified as unaccompanied. Based on available data, it appears that about 6,500 children from the Northern Triangle countries have been removed since FY 2009, and that most of the remainder are still awaiting their removal hearing.

1 As reported in our issue brief, “Child Migration by the Numbers,” 24 percent of children in government custody were under 14 in 2013.

3 The original story based on the dataset, “More Deportations Follow Minor Crimes, Records Show,” was published in April 2014 is available here.

4 Because the data set included only birth years, not birth dates, the estimates under-count one key group and over-count another. The totals omit 17-year-olds who turned 18 during the same fiscal year they are apprehended, resulting in an under-count. However, some of the 18-year-olds who were apprehended during the previous fiscal year were likely 18 at the time of apprehension, resulting in an over-count. Given the data’s limitations, it is reasonable to assume that these groups are approximately the same size. While a dataset with apprehended migrants’ birth dates would enable a more precise estimate, such data does not seem to be publicly available.