Iran’s nuclear program shows no signs of slowing down, although it is not progressing as rapidly as earlier in the year. The latest report by inspectors from the International Atomic Energy Agency (IAEA), released on November 16, shows that in every measure Iran has either reached new highs or continues operating at the highest levels previously recorded.* Most disturbingly, Iran has completed the installation of all centrifuges (2,784 total) at its underground Fordow facility, although only a quarter (696) of them are currently operational. Once they are brought online, the remaining 2,088 centrifuges could as much as triple Iran’s production rate of 20% enriched uranium. Interestingly, however, Iranian leaders continue to keep their stockpile of 20% enriched uranium ? one of the most important indicators of their proximity to a nuclear weapons capability ? at stable levels (about 90 kilograms) by turning it into reactor fuel as quickly as they can produce it.

With both Iran’s production rate of 3.5% enriched uranium and 20% enriched uranium stockpile remaining at the same levels as in the previous reporting period, the time Iran would need to produce enough fissile material for a nuclear weapon is also relatively unchanged: – Depending on the method used, Iran could produce 20 kilograms of highly enriched uranium, enough for a weapon, in between 28 and 103 days.

Iran is already dangerously close to becoming a nuclear weapon-capable state, and it is imperative that the United States act to stop the clock. To meet this most pressing national security challenge, the Bipartisan Policy Center Iran Task Force released a February 2012 report, Meeting the Challenge: Stopping the Clock, co-chaired by former Senator Charles Robb and General (ret.) Charles Wald, calling for a robust and comprehensive triple-track strategy involving the simultaneous pursuit of diplomacy, sanctions, and visible, credible preparations for a military option. Additionally, the task force has released several white papers further detailing specific elements of this strategy, including: mechanisms to assess the effectiveness of sanctions; principles for negotiating diplomatically with Iran; and specific elements of visible, credible preparations for a military option.

Additionally, the BPC’s Iran Task Force recently conducted an analysis of the energy and economic consequences a nuclear Iran would have for the United States, that found that even without any disruptions to the flow of oil a nuclear Iran could raise the price of oil as much as 30% over three years. 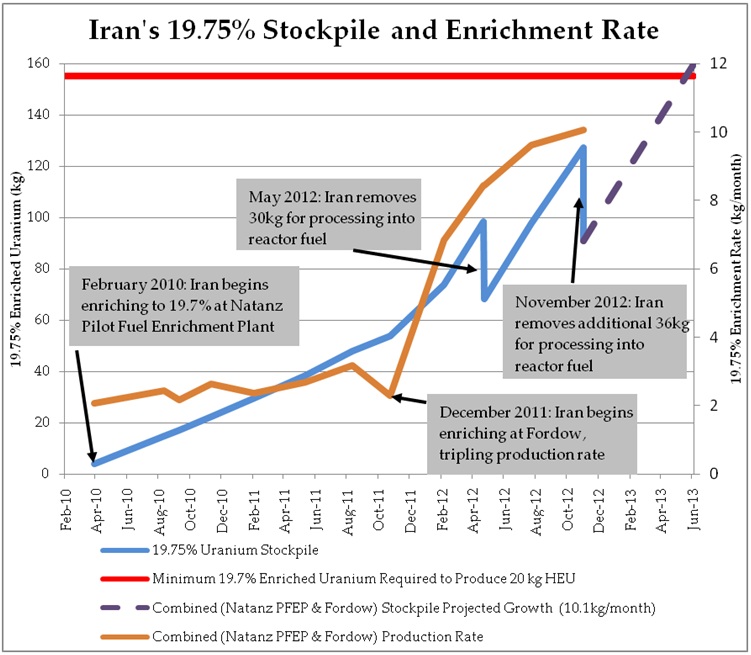 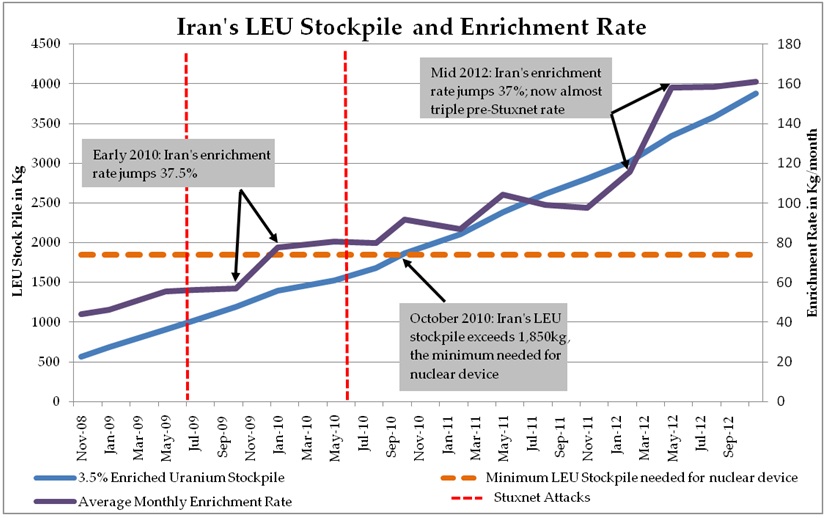 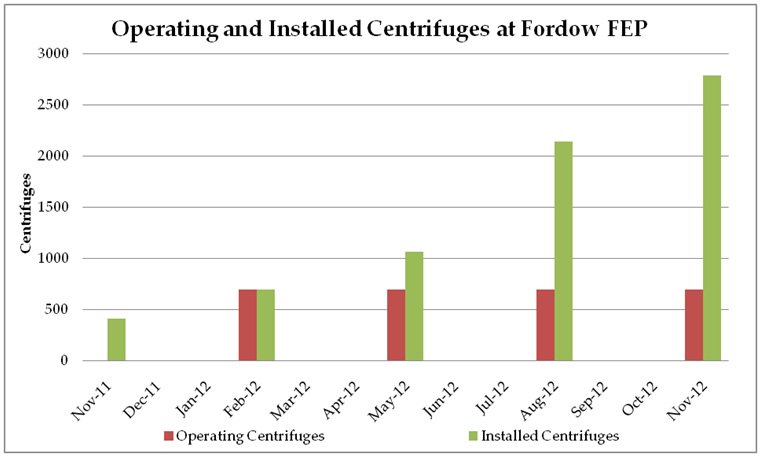 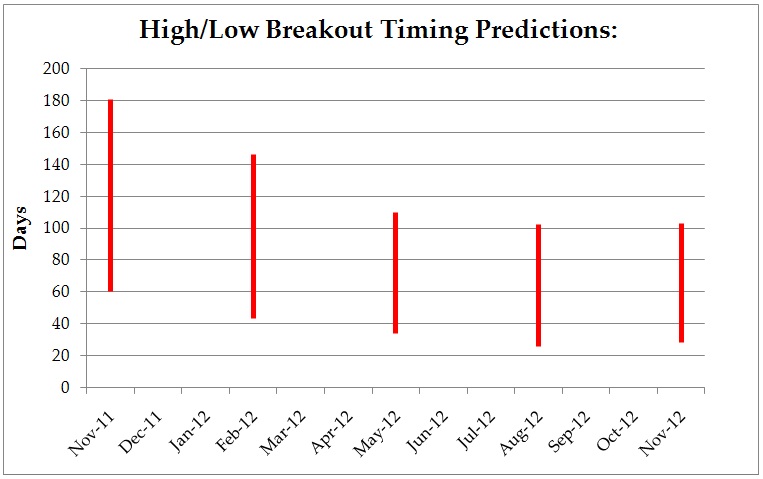 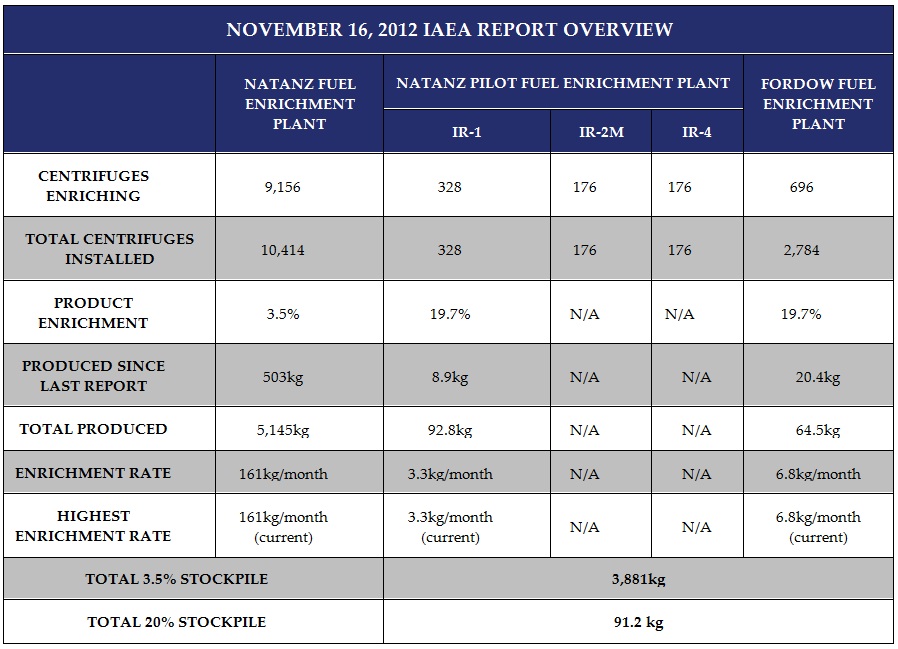 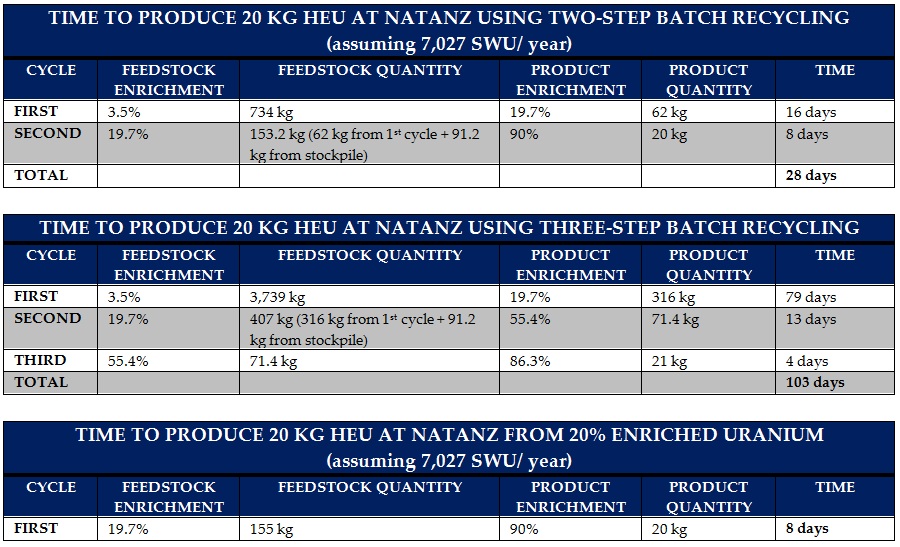 * As of latest IAEA report: “Implementation of the NPT Safeguards Agreement and relevant provisions of Security Council resolutions in the Islamic Republic of Iran,” Board of Governors Report, International Atomic Energy Agency, November 16, 2012 (GOV/2012/55) ** For enrichment, uranium must be in gas form as uranium hexafluoride (UF6). The IAEA reports its data in kilograms of UF6. However, for this paper, we will refer to solid form uranium. One kilogram of UF6 yields roughly 0.67kg uranium metal. *** This range depends on whether Iran uses a two- or three-step batch recycling process to produce highly enriched uranium for a nuclear weapon and is based upon the work of Greg Jones at the Nonproliferation Policy Education Center. Both scenarios assume the use of the Natanz Fuel Enrichment Plant at its current production rate and drawing upon Iran’s current stockpiles of 3.5% and 20% enriched uranium. For a more detailed explanation, see here. **** If Iran continues to produce 20% enriched uranium at its current rate, by May 2013 it will have stockpiled 155kg, the minimum needed to produce HEU for a nuclear weapon.

14554
With Iran already dangerously close to becoming a nuclear state, America must act to stop the clock