The first report of the International Atomic Energy Agency (IAEA) on Iran’s nuclear program since the interim deal, known as the “Joint Plan of Action” (JPA), between Iran and world powers went into effect on Jan. 20, 2014, tells a tale of two Irans. On the one hand is the best of Irans, one that is cooperative and compliant with both the JPA and the Framework for Cooperation (FC), a separate deal to provide more information about its nuclear work to the IAEA. On the other is the worst of Irans, one that continues to violate legally binding IAEA requirements and United Nations Security Council resolutions. The picture that emerges is one of an Iran willing to follow the letter of some of its agreements, but only when the cost to its nuclear progress is not prohibitive. Iran continually refuses to explain its research into building nuclear weapons and ballistic missiles, and has found ways to advance its nuclear program, even under the terms of the JPA.

There is only one area in which it has yet to fully meet the JPA’s requirements, but it has found ways to continue advancing its nuclear program despite the deal’s constraints. Notably, it has increased its production rate and stockpile of 3.5% enriched uranium while continuing to research advanced centrifuges. Additional IAEA funding is required to enable it to fully monitor Iranian compliance. 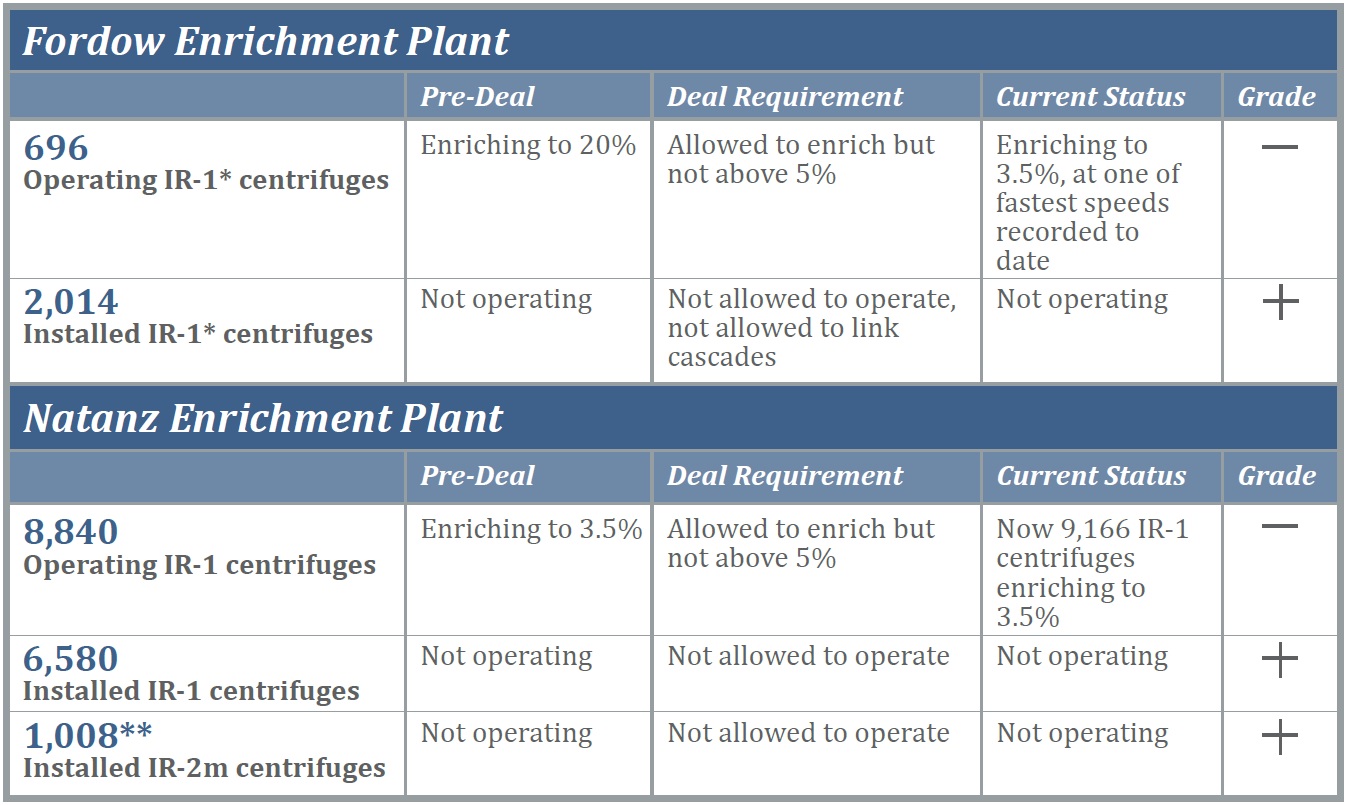 
First, the IAEA report notes that “Iran has implemented the six initial practical measures that it agreed with the Agency in November 2013 in relation to the Framework for Cooperation and both parties have agreed on the next seven practical measures.” These measures largely relate to Iran providing the IAEA information about current and planned future expansion of its nuclear program?its stated intention, for example, to build ten more uranium enrichment plants. But, with one exception, they do not include any commitment by Iran to disclose its military research on nuclear weapons.

A November 2011 IAEA report listed evidence of Iran’s work on numerous technologies that were tied to building a nuclear weapon and had little or no civilian justification. In particular, the IAEA has repeatedly asked Iran to explain why it met with a foreign expert in initiating explosions, like those used to trigger a nuclear weapon, and to give it access to a site at the Parchin military complex, where it believes Iran conducted testing of such explosions. Over the course of two years, Iran has not explained to the IAEA why it was conducting such research or access to the facilities where it believes this research took place. “Iran has carried out activities that are relevant to the development of a nuclear explosive device,” the latest report says. “This information is assessed by the Agency to be, overall, credible. Iran has dismissed the Agency’s concerns?.” The one exception is Iran’s agreement, under the extended Framework for Cooperation, to give the IAEA an explanation for its work on detonators for use in a nuclear weapon.

The latest IAEA report also suggests that Iran is complying with most of its requirements under the JPA. Most important, production of 20% enriched uranium has been halted, the interconnections between centrifuge cascades that enabled enrichment to that level have been disconnected, and the IAEA has put in place additional monitoring to verify that they are not reconnected. Additionally, Iran has begun to reduce its stockpile of 20% enriched uranium, converting half into reactor fuel and diluting the other half back to 3.5% enrichment levels, refrained from installing any additional centrifuges, and halted work on the Arak heavy water reactor.

The one area where Iran has not quite lived up to the JPA is the requirement for it to convert all of its newly-produced 3.5% enriched uranium into uranium oxide. Iran is building a new conversion facility, but has not told the IAEA when it will be completed.

But while Iran is sticking to the letter of the JPA, the intent of which is to “pause” or “freeze” its nuclear program, it is not living up to the spirit of the agreement. Indeed, the IAEA report shows three ways in which Iran is actually increasing its nuclear work, even while constrained by the JPA:

Considered in its totality, therefore, the latest IAEA report paints a picture of an Iran that is willing to cooperate with world powers so long as this does not compromise its ability to advance its nuclear program. When it is required to take actions that might actually constrain its nuclear progress?such as suspend all enrichment, as required by six United Nations Security Council resolutions, or disclose military research?Iran stonewalls and obfuscates. As a result, “the Agency is not in a position to provide credible assurance about the absence of undeclared nuclear material and activities in Iran, and therefore to conclude that all nuclear material in Iran is in peaceful activities.” In short, even current compliance with the JPA and FC should not be taken as grounds for trusting Iran or its intentions.

It is essential that the IAEA be given the resources to properly monitor and verify Iran’s nuclear activities. Moreover, to give negotiators working towards a comprehensive agreement with Iran the best chance of success, the United States should adopt a triple-track strategy that combines diplomacy with increased sanctions and credible and visible preparations of the military option, as laid out by the Bipartisan Policy Center’s (BPC) Iran Task Force. Indeed, if diplomacy is to succeed, the growing disagreement between the White House and Capitol Hill about how to negotiate and what to demand from Iran needs to be addressed. BPC has released a proposed framework for such improved executive-legislative cooperation. 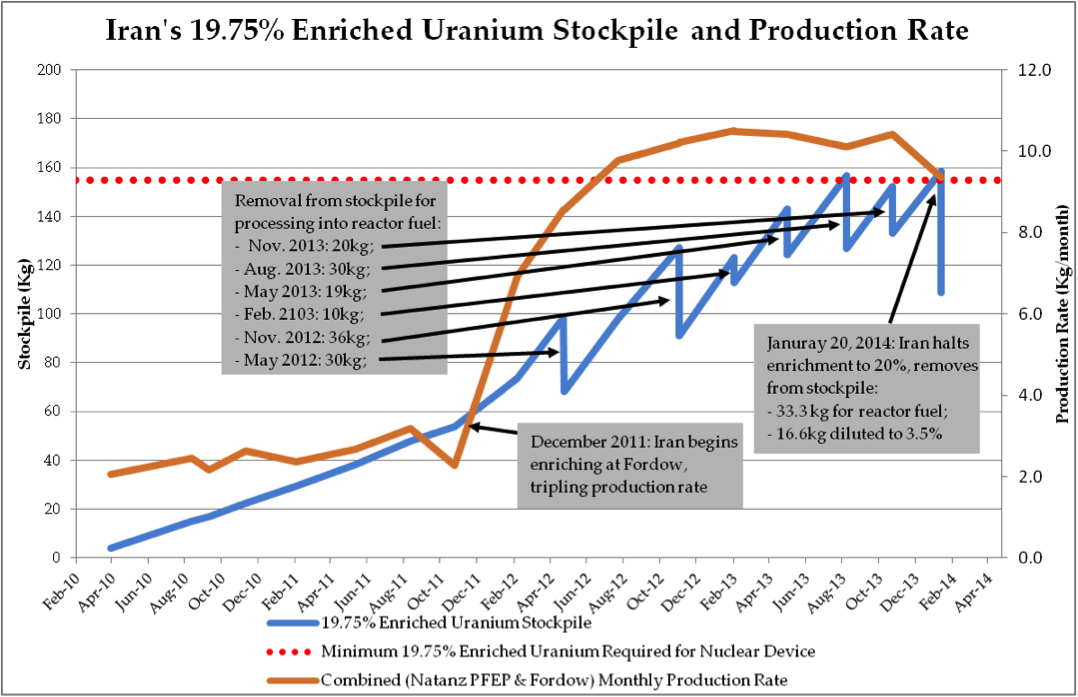 But Production of 3.5% Enriched Uranium Jumps 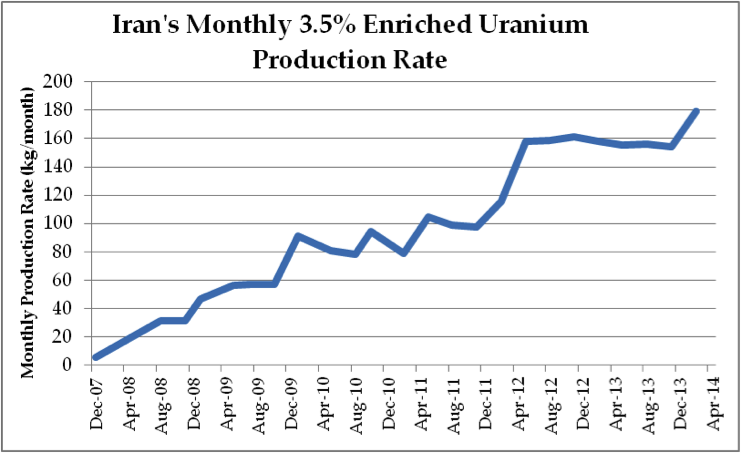 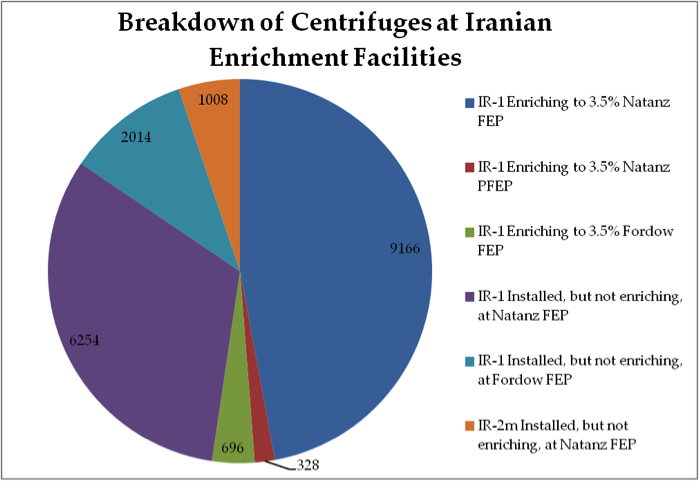 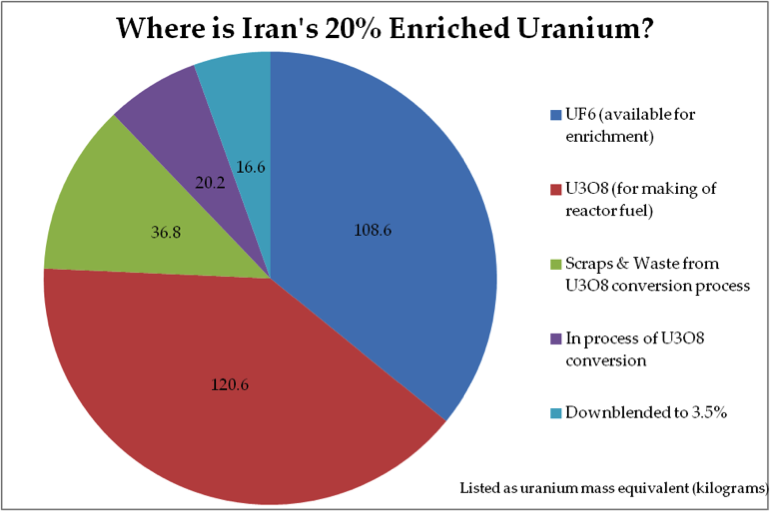 Two main variables will determine how much time Iran would need to produce 20kg of 90% enriched uranium?the minimum needed for a nuclear weapon?in the near future: its available stockpile of 20% enriched uranium; and the rate at which its centrifuges are able to enrich uranium. The first is expected to decline to zero as a result of the JPA, increasing breakout timing. However, the latest IAEA report indicates that the second might be increasing, thus, causing a delay. 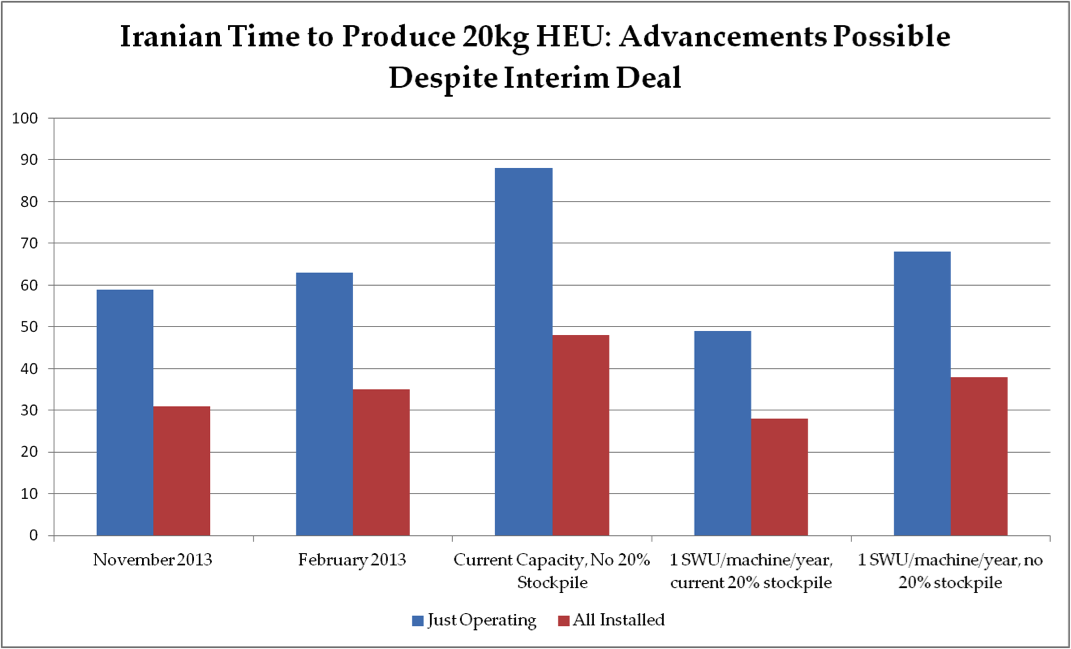 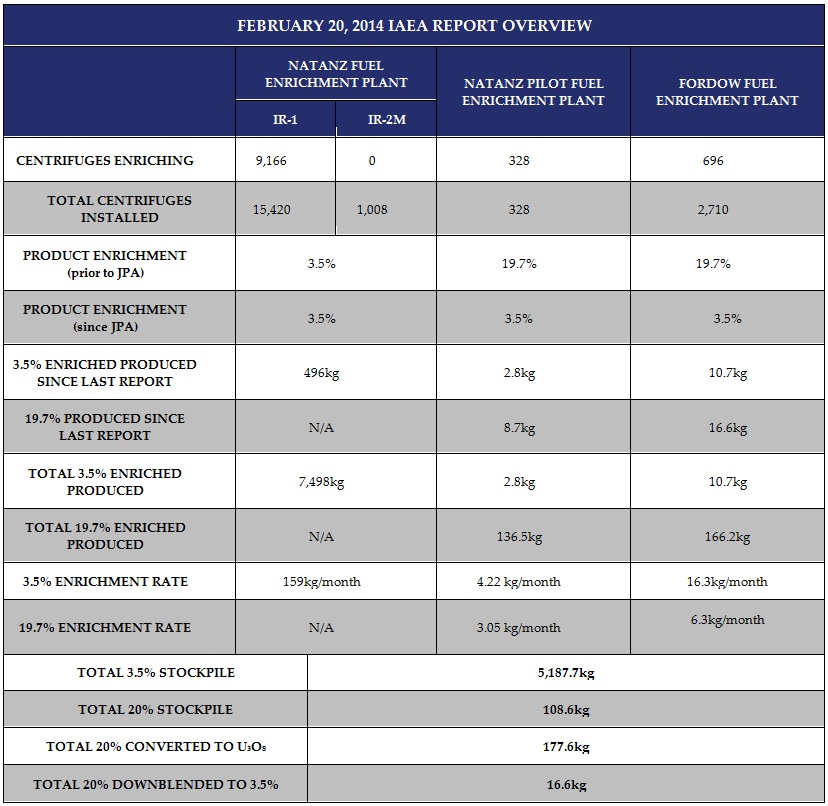 1 For enrichment, uranium must be in gas form as uranium hexafluoride (UF6). The IAEA reports its data in kilograms of UF6. However, for this paper, we will refer to solid form uranium. One kilogram of UF6 yields roughly 0.67kg uranium metal.

2 This calculation assumes Iran uses a three-step batch recycling process to produce highly enriched uranium for a nuclear weapon and is based upon the work of Greg Jones at the Nonproliferation Policy Education Center. Both scenarios assume the use of the Natanz Fuel Enrichment Plant at its current production rate and drawing upon Iran’s current stockpiles of 3.5% and 20% enriched uranium. For a more detailed explanation, see here.

16134
While Iran is sticking to the letter of the nuclear deal, it is not living up to the spirit of the agreement