The latest report by inspectors from the International Atomic Energy Agency (IAEA), released on August 28, makes clear two things: credible red lines are effective; and precision is important in formulating those red lines. Over the last year, Iran has been deliberately slowing down parts of their nuclear program?specifically their accumulation of 20% enriched uranium?to avoid stating a very clearly drawn, and apparently credible in the eyes of Iran’s leadership, Israeli red line. At the same time, however, Iran has found ways to speed up other elements of its nuclear program without crossing any red lines, while still drawing closer to nuclear weapons capability.

Nearly a year ago, Israeli Prime Minister Benjamin Netanyahu declared before the United Nations General Assembly, “the red line should be drawn right here?before Iran completes the second stage of nuclear enrichment.” He then defined the second stage as the production of enough medium (i.e. 20%) enriched uranium for a nuclear device. Since that time, Iran has been systematically reducing its stockpile of that substance. This latest IAEA report shows this trend continuing. Almost every kilogram of 20% enriched uranium Iran produced over the last three months was removed for conversion into fuel for its Tehran Research Reactor. This move suggests that Iran takes Netanyahu’s red line, and the threat that stands behind it, seriously and is trying to stop itself from accumulating enough 20% enriched uranium ? roughly 155 kilograms ? to produce, with further enrichment, enough fissile material for a nuclear device. In fact, without these draw downs Iran would have crossed that threshold in November 2012. Instead, it has now pushed backed that date by at least a year, into November 2013, assuming it remains on its current trajectory and does not further deplete its stockpile.

On the other hand, Iran appears to be trying to speed up its nuclear work by expanding the Natanz Fuel Enrichment Plant with additional centrifuges, including next generation models. In the last three months, Iran has added over 1,800 centrifuges to Natanz, more than double what it had installed in the previous quarter. More disturbingly, Iran continues to install advanced centrifuges, known as the IR-2m model, at Natanz. These machines could prove twice as effective, or more, at enriching uranium than the current IR-1 model. The IAEA report shows that Iran has already fully installed 1,008 of these new machines, and is in the process of installing another 2,000.

While the United States and its international partners prepare to test whether the newly-elected Iranian president, Hassan Rouhani, will prove more willing to negotiate than his predecessor, Iran is poised on the threshold of undetectability: the capability to produce enough highly-enriched uranium for a nuclear device faster than the IAEA would be able to detect it and the United States able to respond.

For this reason, the continued pressure of a triple-track strategy that includes diplomacy, sanctions and credible and visible preparations of a military option, which was recommended by the Bipartisan Policy Center’s (BPC) Iran Task Force, co-chaired by Senator Charles Robb and General (ret.) Charles Wald, remains necessary. Bipartisan legislation recently passed by the House of Representatives would tighten sanctions against Iran and put in place a mechanism for assessing Iran’s nuclear progress. This is an important step towards preventing a nuclear weapons capable Iran.

– Fifth time in last year Iran has done this, for total of 125 kg removed:

Expansion of Natanz continues at fastest pace ever.
– Number of operating centrifuges increases to 9,156;
– 15,416 IR-1 centrifuges installed;
– Up from 13,555 in May 2013;
– Installing average of 600 centrifuges per month;
– Preparatory work for additional 6,000 centrifuges already completed.

Iran begins installing next generation centrifuges at Natanz.
– 1,008 IR-2m centrifuges have been fully installed;
– Preparatory work for additional 2,000 centrifuges already completed;
– IR-2m centrifuges likely to be at least twice as productive as the IR-1 model.
– Iran is also experimenting with even more advanced IR-4, IR-6, and IR-5 centrifuge models at its R&D facility.

Depending on the method used, Iran could produce 20 kilograms of highly enriched uranium, enough for a weapon, in between 19 and 101 days.2

If Iran were to bring online all currently installed IR-1 centrifuges, that window would fall to between 13 and 60 days.

For a larger version of the chart above, click here. 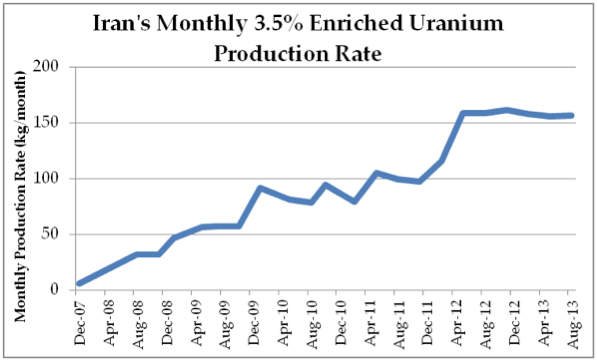 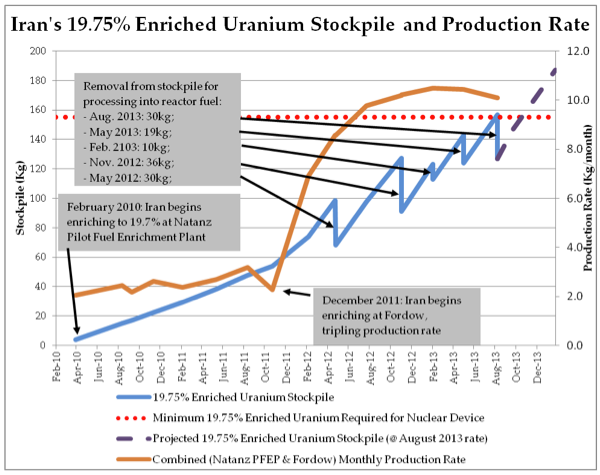 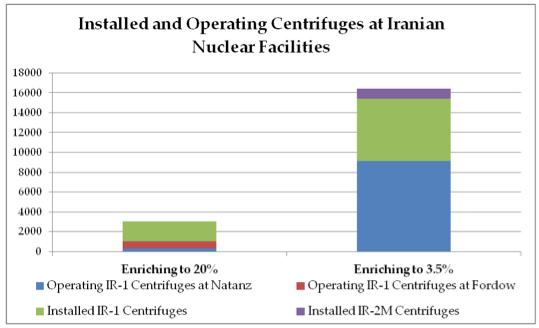 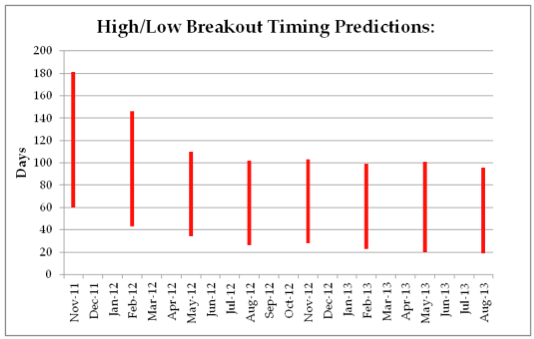 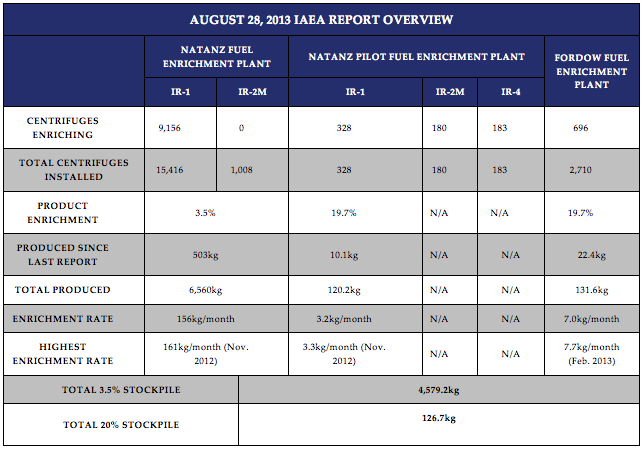 1 For enrichment, uranium must be in gas form as uranium hexafluoride (UF6). The IAEA reports its data in kilograms of UF6. However, for this paper, we will refer to solid form uranium. One kilogram of UF6 yields roughly 0.67kg uranium metal.
2 This range depends on whether Iran uses a two- or three-step batch recycling process to produce highly enriched uranium for a nuclear weapon and is based upon the work of Greg Jones at the Nonproliferation Policy Education Center. Both scenarios assume the use of the Natanz Fuel Enrichment Plant at its current production rate and drawing upon Iran’s current stockpiles of 3.5% and 20% enriched uranium. For a more detailed explanation, see here.

14128
Iran has found ways to speed up its nuclear program without crossing any red lines, drawing closer to nuclear weapons capability