The latest report from the International Atomic Energy Agency (IAEA), released on May 22, demonstrates that Iran is continuing a trend first identified in February 2013: slowing down and speeding up elements of its nuclear program to evade red lines set by U.S. and Israeli leaders, while drawing closer to nuclear weapons capability.

Yet, Iran also appears to be expanding the Natanz Fuel Enrichment Plant with additional centrifuges, including next-generation models. In the last three months, Iran has added almost 900 centrifuges to Natanz. More disturbingly, Iran continues to install advanced centrifuges, known as the IR-2m model, at Natanz. These machines could prove twice as effective, or more, at enriching uranium than the current IR-1 model. The IAEA report shows that in the last three months Iran has installed, or is in the process of installing, 509 of these new machines, for a total of 689.

Iranians are preparing to elect a new president from among eight regime-approved candidates on June 14. Diplomacy is on pause during this spectacle, in the hopes that whoever emerges victorious will be more willing to negotiate an end to Iran’s nuclear standoff. In the meanwhile, however, ever more centrifuges continue to spin, bringing Iran ever closer to the threshold of undetectability: the capability to produce enough highly-enriched uranium for a nuclear device faster than the IAEA would be able to detect it and the United States would be able to respond.

For this reason, the continued application of pressure according to the triple-track strategy of diplomacy, sanctions and credible and visible preparations of the military option, as laid out by the Bipartisan Policy Center’s (BPC) Iran Task Force, co-chaired by Senator Charles Robb and General (ret.) Charles Wald, remains necessary. The House of Representatives is currently considering bipartisan legislation that would tighten sanctions against Iran, eliminate the president’s ability to grant waivers from sanctions, and put in place a mechanism for assessing Iran’s nuclear progress. Passing this bill could be an important step towards preventing a nuclear weapons-capable Iran.

– Fourth time in last year Iran has done this, for total of 95 kg removed:

– 155 kg of 20% enriched uranium is minimum needed, with further enrichment, for a nuclear weapon.

But highest number of installed centrifuges at Natanz ever, more planned.

– 689 IR-2m centrifuges and casings have been installed.

– Iran informed IAEA that it plans to install 2,952 IR-2m centrifuges at Natanz.

– IR-2m centrifuges are designed to twice as productive as the currently deployed IR-1 model.

– Iran is also experimenting with even more advanced IR-4, IR-6, and now for the first time ever, IR-5 centrifuge models at its R&D facility.

– Number of operating centrifuges steady at 696;

– But all remaining 2,088 centrifuges installed, tested and prepared for enrichment, could become operational imminently.

Production of 20% enriched uranium could triple when Fordow fully-operational.

– Once operational, remaining 2,088 centrifuges could produce additional 22.2 kg of 20% enriched per month;

Depending on the method used, Iran could produce 20 kilograms of highly enriched uranium, enough for a weapon, within 20 to 101 days.**

– IR-2m centrifuges at Natanz are installed and operating.

For a larger version of the chart above, click here. 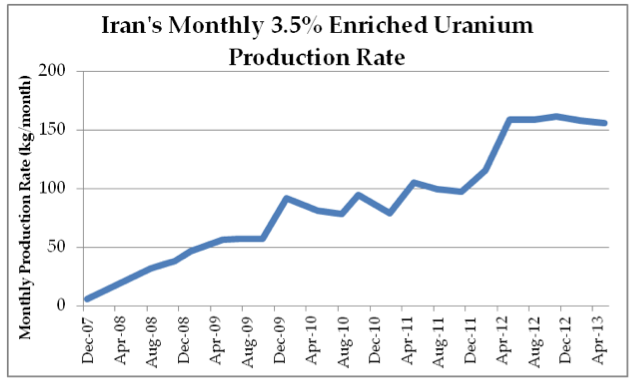 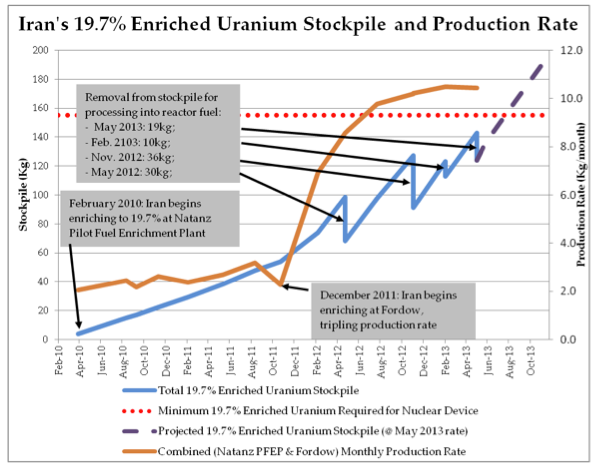 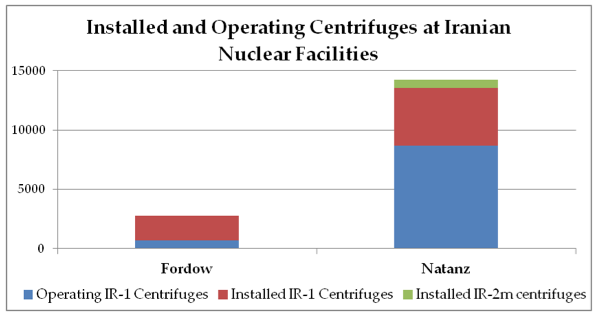 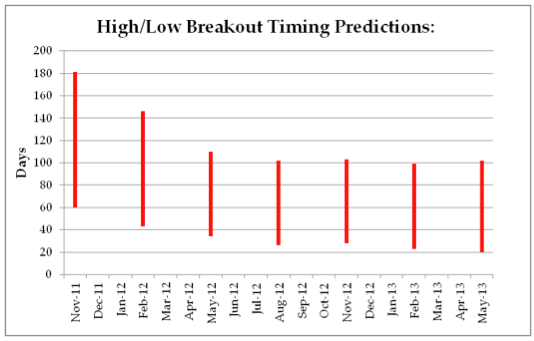 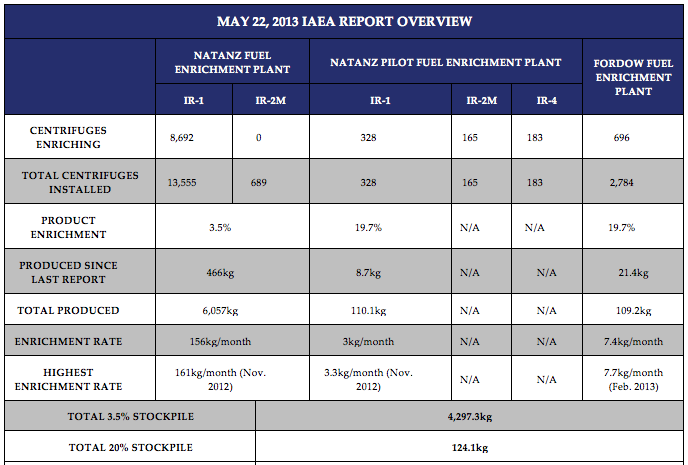 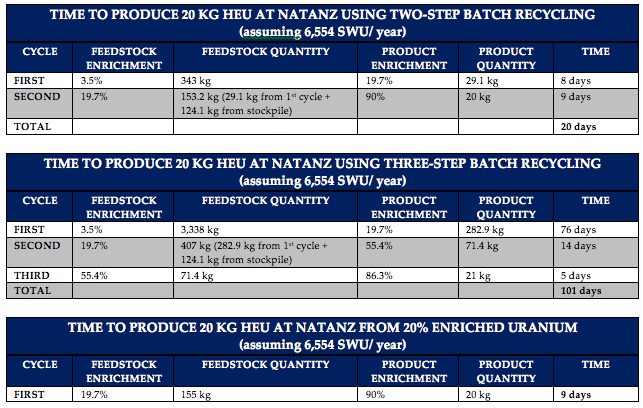 * For enrichment, uranium must be in gas form as uranium hexafluoride (UF6). The IAEA reports its data in kilograms of UF6. However, for this paper, we will refer to solid form uranium. One kilogram of UF6 yields roughly 0.67kg uranium metal.

** This range depends on whether Iran uses a two- or three-step batch recycling process to produce highly enriched uranium for a nuclear weapon and is based upon the work of Greg Jones at the Nonproliferation Policy Education Center. Both scenarios assume the use of the Natanz Fuel Enrichment Plant at its current production rate and drawing upon Iran’s current stockpiles of 3.5% and 20% enriched uranium. For a more detailed explanation, see here.

*** If Iran continues to produce 20% enriched uranium at its current rate, by May 2013 it will have stockpiled 155kg, the minimum needed to produce HEU for a nuclear weapon.