News late last week from independent international nuclear inspectors paints a troubling picture of Iran’s rapid progress toward nuclear weapons capability. Released on May 25, just days after U.S. and international negotiators completed a second round of talks in Baghdad with Iran over its nuclear program, the International Atomic Energy Agency (IAEA) report shows that in every measure Iran has reached new highs.* Indeed, our analysis indicates that, due to significant increases in the rate of production of both 3.5% and 20% enriched uranium, Iran is now producing almost two nuclear weapons worth of low-enriched uranium (LEU) annually.?

Surge in Enrichment Rate and Output

– Known 3.5% enriched uranium stockpile reaches 3,345kg; can be used to fuel nuclear reactors. Enough, with further enrichment to 90%, for almost two nuclear weapons. Jump in enrichment rate occurs without major rise in number of centrifuges at Natanz – 8,818 centrifuges being fed uranium, most ever, but only ten more than at last inspection;

As a result of these developments, the time Iran would need to produce enough fissile material for a nuclear weapon has fallen dramatically: – Depending on the method used, Iran could produce 20 kilograms of highly enriched uranium, enough for a weapon, in between 34 and 110 days.***

Solution or Stall? The Next Round of Talks with Iran

Iran is already dangerously close to becoming a nuclear weapon-capable state, and it is imperative that the United States act to stop the clock. To meet this most pressing national security challenge, the Bipartisan Policy Center Iran Task Force released a February 2012 report, Meeting the Challenge: Stopping the Clock, co-chaired by former Senator Charles Robb and General (ret.) Charles Wald, calling for a robust and comprehensive triple-track strategy, involving the simultaneous pursuit of diplomacy, sanctions, and visible, credible preparations for a military option. Additionally, the Task Force has released several white papers further detailing specific elements of this strategy, including: mechanisms to assess the effectiveness of sanctions; principles for negotiating diplomatically with Iran; and specific elements of visible, credible preparations for a military option. 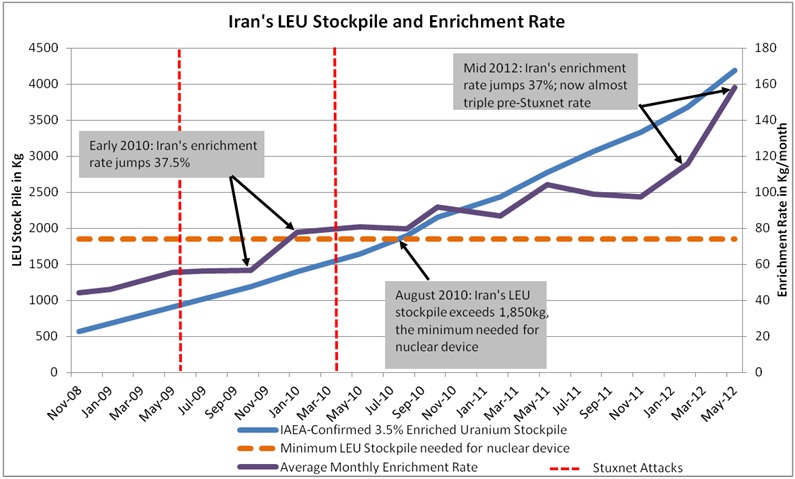 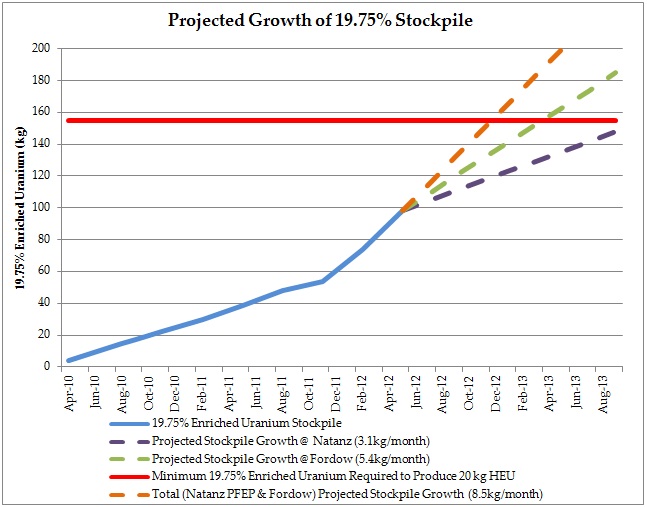 For larger versions of the tables below, please click here to zoom in. 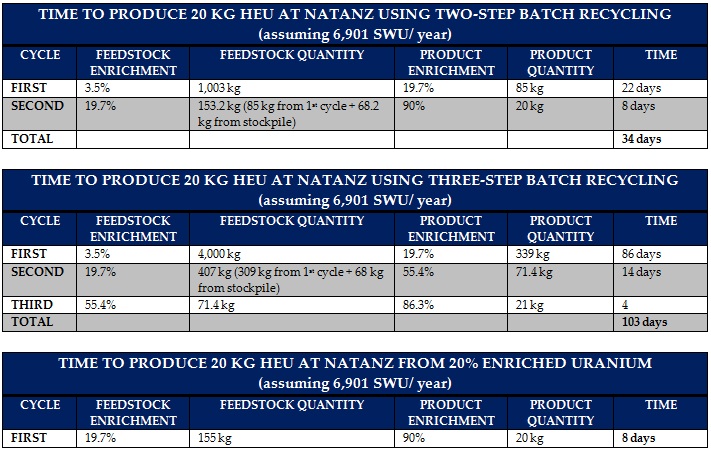 * IAEA report: “Implementation of the NPT Safeguards Agreement and relevant provisions of Security Council resolutions in the Islamic Republic of Iran,” Board of Governors Report, International Atomic Energy Agency, May 25, 2012 (GOV/2012/23) ** For enrichment, uranium must be in gas form as uranium hexafluoride (UF6). The IAEA reports its data in kilograms of UF6. However, for this paper, we will refer to solid form uranium. One kilogram of UF6 yields roughly 0.67kg uranium metal.

*** This range depends on whether Iran uses a two- or three-step batch recycling process to produce highly enriched uranium for a nuclear weapon and is based upon the work of Greg Jones at the Nonproliferation Policy Education Center. Both scenarios assume the use of the Natanz Fuel Enrichment Plant at its current production rate and drawing upon Iran’s current stockpiles of 3.5% and 20% enriched uranium. For a more detailed explanation, see here.

**** If Iran continues to produce 20% enriched uranium at its current rate, by November 2012 it will have stockpiled 155kg, the minimum needed to produce HEU for a nuclear weapon.